TOKYO -- Japanese game company Nintendo had a banner year in fiscal 2017 ended last month, doubling its revenue thanks to the successful Nintendo Switch gaming console, according to its earnings report released on Thursday.

Its earnings for fiscal 2017 totaled 1.0 trillion yen ($9.6 billion), an increase of 115% from the previous year. Its operating profit increased sixfold, and net profit rose 36% to reach 139 billion yen.

The key driver of the growth was the Nintendo Switch console, released in March 2016. The Switch is unique, in that it can be used to play games both by using a television as a monitor and on its own. The year's sales have reached 15 million, 50% higher than the company's original goal. 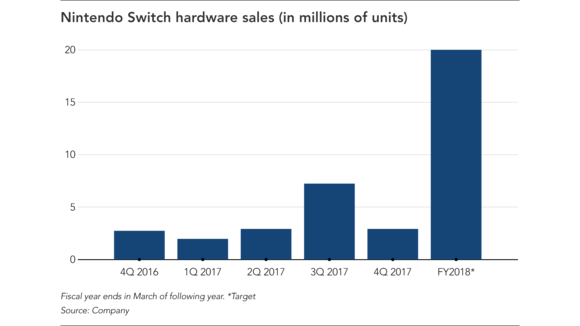 The company expects sales to grow to 20 million units in the fiscal year ending March 2019. The net profit forecast is 165 billion yen, up 18% from the recently ended year.

While there are concerns over slowing sales of hardware, the company expects long-term growth in sales of associated software. Twelve game titles for the Switch, including Nintendo's original "Super Mario Odyssey" and third party titles, have sold over 1 million copies in a year.

Nintendo's cumulative sales of Switch software have reached 68 million units, and the company is looking for that number to reach extra 100 million next year.

The company this month started selling software called "Nintendo Labo," a game that in which the user builds things with cardboard and operates them with the console. With a new service, "Nintendo Switch Online," coming up in September and the company inviting startups to suggest ideas for the console to enhance functions, the Switch is set to attract more users.

The company also announced the retirement of President Tatsumi Kimishima, effective June 28. Kimishima assumed his position in 2015 after the sudden death of then-President Satoru Iwata, in the midst of stagnant company performance.

His successor, 46-year-old Shuntaro Furukawa, has worked in accounting and corporate planning, as well as contributing to the Switch's success through sales planning. He also worked at a branch in Germany for around 10 years.

Kimishima's decision to hand over his position comes with positive outcomes of his projects and efforts to look for a new generation of managers who are closer in age to the company's young consumers.