Labo was meant to extend the life of the blockbuster hardware TOKYO -- Despite an 88% jump in quarterly operating profit, Nintendo's strategy of using unique games incorporating cardboard construction to prolong the life of its Switch console may not be going according to plan.

The Switch hybrid system started off with a bang and helped the company bounce back from the failure of the Wii U. But the one-of-a-kind Nintendo Labo software launched in April has not sparked Switch sales as hoped, with sales instead starting to slow.

So as good as the first quarter looks on paper, seeds of doubt are germinating.

Nintendo released the Switch in March 2017, planning to make it the base of revenue and the bedrock of stable growth. A push to release a range of titles helped fuel the huge jump in operating profit for the quarter ended June 30. Nintendo reported Switch software sales of 17.96 million units, up 120% on the year.

But Switch hardware seems to be losing steam. April-June sales totaled 1.88 million units, less than the 1.97 million units of a year earlier.

The Switch rescued Nintendo's earnings from a slump. The device was in chronic short supply in Japan a year ago, with fans lining up in front of electronics retailers on weekends for lotteries to decide who could buy.

But Switch fever has since subsided. The Labo software launched this spring, after the initial Switch buzz had faded, has failed to reignite Switch sales as it was supposed to. "Even with the start of summer vacation, sales have not been impressive," a Yodobashi Camera store manager in Osaka said.

Labo is a unique type of game software that involves constructing cardboard models that interact with the Switch and the sensors built into Switch controllers. 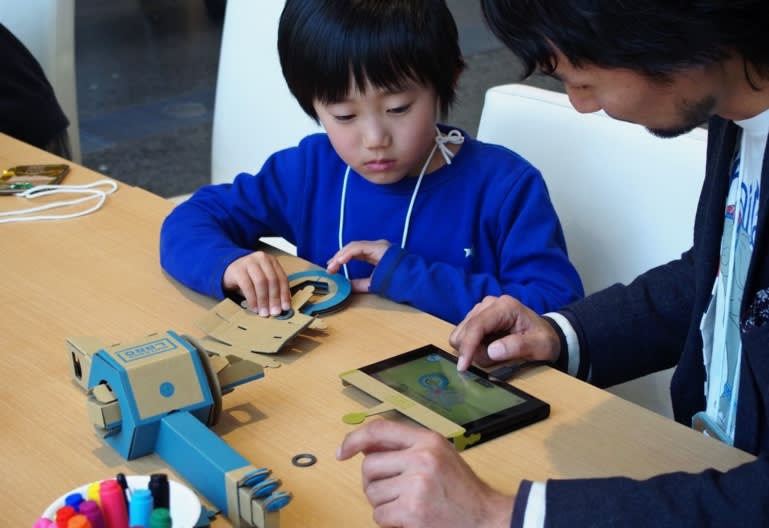 Gamers follow instructions on the Switch to make the cardboard models. (Photo by Shiko Ueda)

Nintendo designed this product to win over new kinds of consumers, including families with small children.

The new style of play means that consumers need time to catch on. But signs of trouble are already emerging.

The games have been criticized as being too simplistic and quickly becoming boring. There have also been complaints of trouble finding places to store the cardboard models. The two Labo products released simultaneously in Japan racked up combined sales of 120,000 units in the first week, according to game magazine publisher Famitsu. But by July, they had sunk to 2,000 units a week.

Before the launch, company executives were certain that Labo would carry Switch sales to the next level in fiscal 2018. Then-President Tatsumi Kimishima stressed at the June 28 shareholders meeting that Labo was not like regular software games, which tend to sell most briskly at the start. He said that the company would work to cultivate consumer interest in Labo and that sales would take off once more people started wanting it.

Most sales of game hardware and software come around the end of the year, making the April-June quarter the offseason. But the quarter is also when momentum builds for the second half, so it is a crucial time and tells the story of Nintendo's past systems.

The Wii was followed by the Wii U, which sold just 3.38 million units at its peak in fiscal 2014. Sales for the April-June quarter of that year reached just 510,000.

Nintendo's performance depends on hardware sales, so Labo's success or failure could portend the company's future under new President Shuntaro Furukawa, who took the helm in June.

In the Wii's heyday, Nintendo had an operating profit in excess of 500 billion yen. During the dark days of the Wii U, the three straight years of red ink put pressure on the company to restructure.

Furukawa wants to develop smartphone games and other new operations and create a business structure less prone to wild swings in performance.

Nintendo expects to grow Switch sales by about 30% to 20 million units in fiscal 2018. Based on past trends in game system sales, this is a high hurdle indeed.