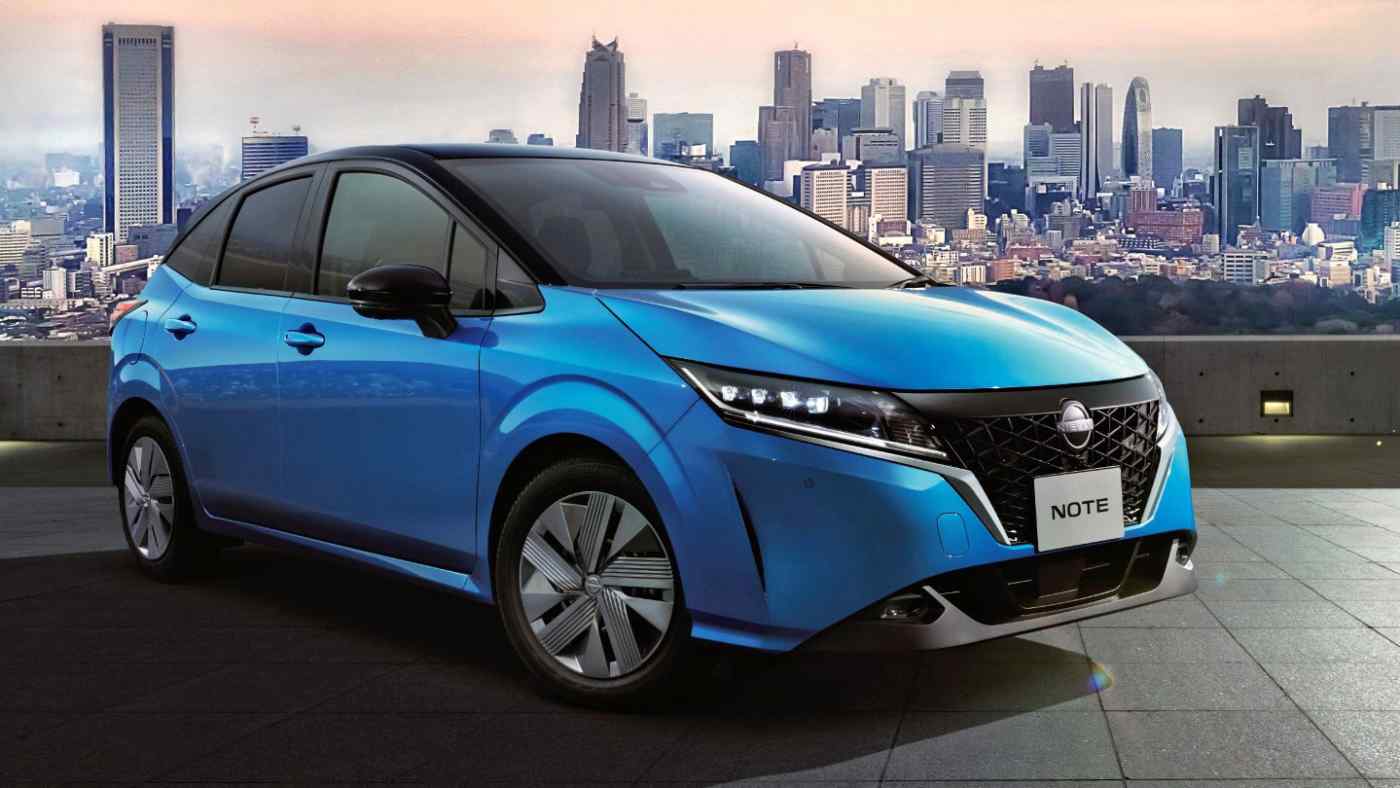 TOKYO -- Nissan Motor has shifted gears in the electrification of its vehicles with the unveiling of its all-new Note compact, exclusively available as a hybrid.

"We will concentrate [management resources] on electrification to lead a zero-emission society," Nissan Executive Vice President Asako Hoshino said on Tuesday during an online news conference. "The Note symbolizes the move."

The move means there will no longer be a gasoline-powered model of what is Nissan's bestselling car in Japan.

Nissan says that by mass-producing the hybrid it can trim manufacturing costs to the level of gas-powered cars, thus improving profitability.

The new Note will spearhead Nissan's drive to meet toughening clean-air regulations around the world.

Note series cars are mainly available in Japan. In fiscal 2019, Nissan sold more than 100,000 Notes, accounting for some 20% of domestic sales.

The first all-new Note in eight years has adopted a platform, developed jointly with alliance partner Renault of France, for improved driving performance. It also has adopted a system that automatically adjusts the car's speed around curves and when navigating other road conditions.

The new Note goes 60% or so further on a tank of gas than the current gas-powered version.

Compared with the existing Note series, including wholly gas-powered cars, the lowest price in the family is now about 600,000 yen higher.

Nissan's aggressive green strategy comes as a result of its confidence in its e-Power hybrid technology.

Nissan developed the e-Power system based on technologies adopted in its Leaf electric vehicle. Unlike the hybrid technologies of Toyota Motor and Honda Motor, which use a combustion engine and an electric motor to run vehicles, the e-Power system uses an engine only to generate electricity and an electric motor to get vehicles to move. Nissan's hybrids are closer to electric vehicles when accelerating; they are also quieter.

In 2016, when redesigned Notes were introduced, Nissan unveiled a hybrid equipped with the e-Power system that aroused strong demand and contributed to a steep increase in Note sales.

Hybrids account for 70% of all current Notes. "In light of a growing trend toward electrification in the world, the exclusive adoption of [hybrids] in the new Note family should not encounter serious effects," a Nissan executive said.

The new Note marks a shift to the second generation of e-Power technology, which involves a redesigned motor, inverter and other core components. The new-generation powertrain has improved acceleration. It also is cheaper to produce due to smaller key parts.

Of Nissan's Japan auto sales in fiscal 2019, hybrids accounted for roughly 30%, less than Toyota's 40%. The new Note will play the leading role as Nissan attempts to raise the domestic sales ratio of electrically driven vehicles, including hybrids, to 60% by fiscal 2023.

The new Note also marks a turning point for Nissan as it accelerates its global retreat from cars dependent on the internal-combustion engine. In China, it will switch all models to either EVs or e-Power-equipped hybrids.

Nissan expects global sales of electrically driven vehicles to reach more than 1 million units in fiscal 2023, from around 200,000 in fiscal 2019. It also expects to bring down hybrid manufacturing costs to the level of gas-powered cars by 2025 so that there is no difference in profitability.

Nissan has fallen into financial trouble that it blames on former boss Carlos Ghosn's expansion strategy. While cutting prices and curbing investment in the development of new cars, the strategy weakened the Nissan brand.

With the pandemic adding to its difficulties, Nissan anticipates a group net loss of 615 billion yen in the current fiscal year through March 2021.

A medium-term business plan announced in May includes a new management focus on "quality of sales." The automaker also hopes to improve its corporate image as it moves its electrically driven vehicle strategy into the fast lane.