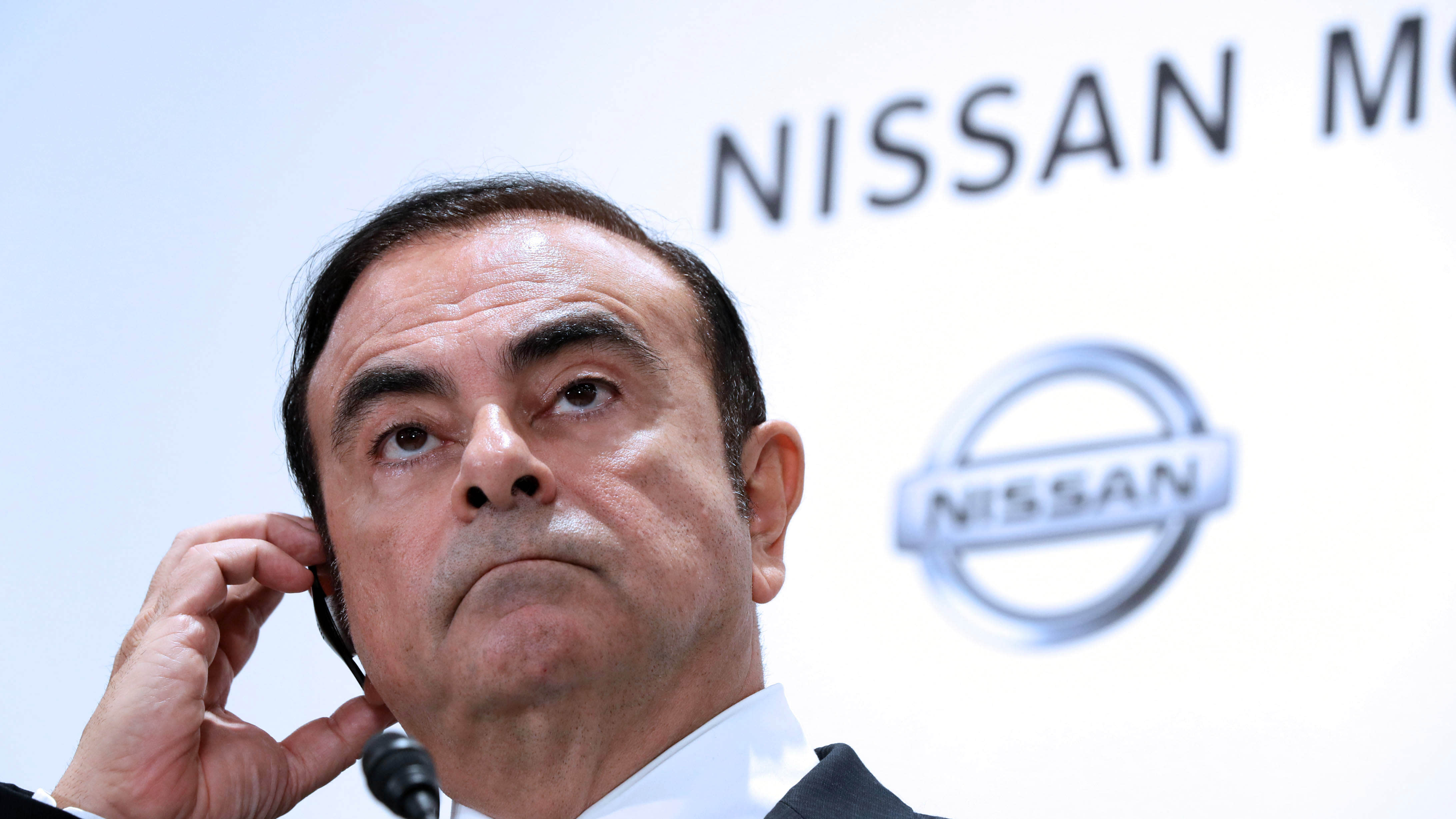 TOKYO -- Carlos Ghosn was on Monday arrested by Tokyo prosecutors for alleged financial misconduct as Nissan Motor, the company he has led for almost 20 years, said it was preparing to sack him as chairman.

The arrest follows allegations by Nissan that it had uncovered "serious misconduct" by Ghosn, including the misuse of company funds. His "prompt" removal as chairman of the Japanese car company that he helped to turn around nearly two decades ago would be proposed to the board on Thursday, the group said.

Ghosn could not be reached for comment. The statement followed a raid on Nissan headquarters on Monday.

The downfall of one of the auto industry's most powerful and highly paid executives has sent a shock wave through the investment community, the auto industry and even into the highest levels of government. As well as chairman of Nissan, Ghosn is chairman and chief executive of Renault, the carmaker in which the French government has a 15% stake, and chairman of Mitsubishi Motors. Together the three companies have formed a global alliance which is the world's second biggest producer of cars.

French President Emmanuel Macron said it was "too soon to tell the reality and materiality of the accusations." However, he said the state would be "extremely vigilant concerning the stability of the alliance and the group" as well as of employees.

Nissan responded to events with a statement detailing the findings of an internal investigation, sparked by a whistleblower's report. The group said it had been investigating misconduct involving Ghosn and another "representative director," Greg Kelly, for several months.

The investigation had shown that "over many years" both Ghosn and Kelly were underreporting compensation to reduce the chairman's disclosed pay, Nissan claimed.

The prosecutor on Monday said that Ghosn had understated his compensation by 5 billion yen ($44 million) over five years to March 2015. Over that period Ghosn was paid 10 billion yen, but only disclosed just under 5 billion yen. 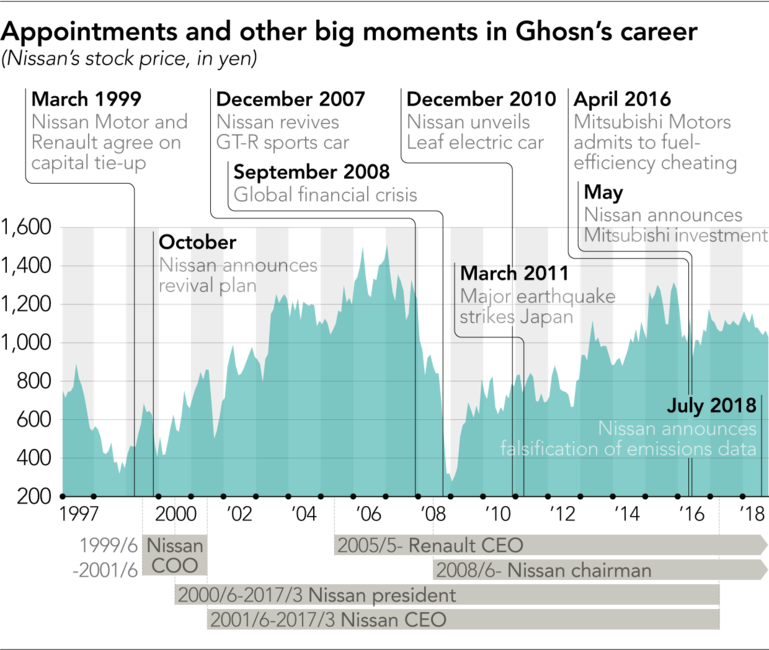 Nissan also alleged that, with regard to Ghosn "numerous other significant acts of misconduct have been uncovered, such as the personal use of company assets." In the Japanese statement it alleged he had misused "company funds." Nissan said Greg Kelly's "deep involvement has also been confirmed."

The group has provided information to the Japanese Public Prosecutors Office and said it would continue to cooperate with the investigation now under way.

Ghosn's absence could have significant consequences for the alliance. Ghosn was renowned for his relentless shuttling between France and Japan, which ensured he retained close control of both Nissan and Renault. Nissan's Saikawa, in a marathon news conference, said the structure which put Ghosn at the head of both companies had allowed "too much concentration of power."

However he insisted that the partnership between Renault, Nissan and Mitsubishi Motors would not be affected. "Rather, the three companies should collaborate more closely to make sure that this scandal won't affect the operations of the three companies," he said.

His arrest "could damage the image of Nissan, Mitsubishi, and Renault, as well as cause further concern regarding the auto industry's transparency and governance," said Tatsunori Kawai, strategist at Kabu.com Securities.

Nissan shares fell more than 8% on SBI Japannext in after hours trading, and the company's American depositary receipts opened more than 9% lower in New York on Monday morning. Meanwhile, Renault shares dropped more than 10% on Euronext. 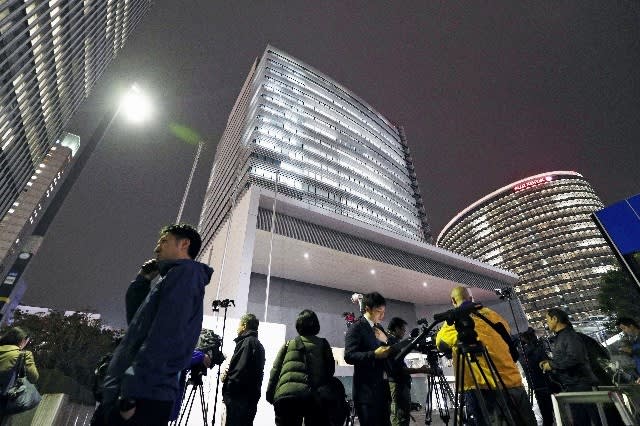 Members of the media gather at Nissan Motor's headquarters in Yokohama on Nov. 19.   © Kyodo

Ghosn's pay as head of the alliance has been a controversial subject for years. According to securities filings submitted by the three companies, Ghosn earned 735 million yen ($6.52 million) from Nissan, 227 million yen from Mitsubishi, and 7.4 million euros ($8.5 million) from Renault in fiscal 2017.

In 2016 shareholders voted against his pay package. Ghosn only received the backing of the French government for a renewal of his mandate this year after agreeing to cut his total remuneration by 30%.

In February, he signed a new contract running to 2022, with the aim of making the alliance between the three carmakers "irreversible."

In June this year Ghosn told the Financial Times he expected to surrender the role of chief executive of Renault before his term ends in 2022.

He said he would remain the company's chairman, as well as chief executive and chairman of the Alliance, responsible for driving the three groups toward being a single global entity.