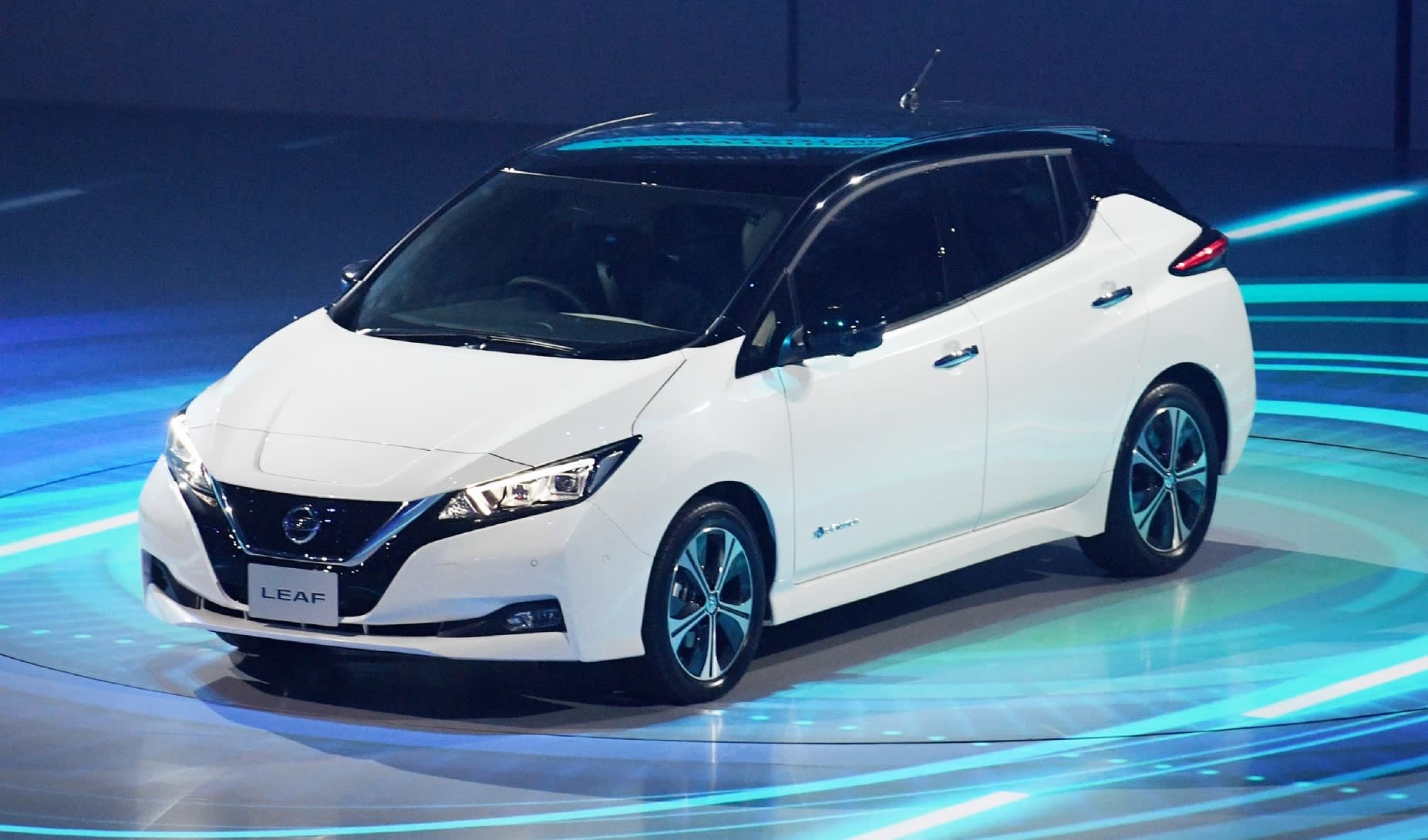 TOKYO -- Nissan Motor's revamped Leaf, its signature fully-electric car, is slated to go on sale in Japan on Monday.

The new model from an automaker that calls itself an electric-car leader has a sales target of 100,000 or so units a year. The number does not sound particularly ambitious, considering that rival Tesla's latest Model 3 attracted 500,000 or so orders.

Behind Nissan's moderate attitude is a bitter lesson of struggling to balance the dream and the reality of pushing the next-generation vehicles. "Sustainability is the most essential thing for a business," said Hideyuki Sakamoto, executive vice president of the automaker. "Nissan isn't a gambler." The comment was an indication that the automaker would not try to sell as many Leafs as possible by offering low prices.

The new Leaf bears a price tag of 3.15 million yen ($27,980) and up. Even taking into account government subsidies for electric-car ownership, worth 400,000 yen or so, the price is higher than Toyota Motor's Prius hybrid, which sells for 2.4 million yen and up.

Nissan has received some 4,000 preorders for the new Leaf in 10 days or so. Although the pace is faster than expected, the attraction somehow seems not powerful enough.

In early September, a day after Nissan unveiled the next-generation Leaf, the automaker's share price temporarily fell 1%. "Investors had expected that a new Leaf could serve as a game changer in the electric car market, but the price and functions were nothing inventive," said Kota Yuzawa of Goldman Sachs Japan.

However, that market disappointment was probably within the automaker's expectations. While adequately featuring state-of-the-art technology, Nissan made the most of parts from the previous Leaf to achieve the desired cost-profitability balance for the revamped version.

"The new Leaf is not a loss-making model," said a Nissan executive.

When the first version of the Leaf was released in 2010, Nissan was more obsessed with romanticism -- with comments such as "We are going to be the leader of zero-emission cars," and "We will combine electric cars and smart homes."

But that dream turned out to be an obstacle for achieving an overly ambitious sales target. Nissan seems to have recognized the gap between dream and reality.

Carlos Ghosn, Nissan's chairman who also heads the Renault-Nissan-Mitsubishi Motors alliance, is cautious about rapidly shifting to electric cars. In mid-September, the chairman unveiled the alliance's midterm plan through 2022, in which the group set the proportion of electric cars and other electricity-powered vehicles at 30% of all vehicles.

The chairman did not specify a precise proportion for electric cars, explaining that it could depend on changes in restrictions by regulators for emissions, as well as cost improvements for batteries, over years.

The electric car market has changed significantly over the last seven years. New players from other sectors are entering the market, threatening traditional automakers with innovative ideas.

Leading electric-car maker Tesla from the U.S. now has a goal to create a new form of social infrastructure by connecting mobility and renewable energy -- namely, electric cars, battery technology and solar power.

Tesla last year sold 76,000 or so cars, which is equivalent to a mere 1% of the number Nissan moved during the same period. Nonetheless, the stock market appears to be appreciating Tesla more than Nissan: Tesla's market capitalization has exceeded $56 billion, greater than Nissan's roughly $46 billion.

Sanshiro Fukao, a senior analyst at Hamagin Research Institute, explained that the appreciation comes from growth expectations for Tesla's potential to be not only a carmaker but also a technology and energy player.

Waiting for the right time, say, a technological breakthrough for batteries, could put Nissan behind its rivals. Nissan could be driven more by romanticism and seek to create a smart mobility society, rather than focusing on calculating profitability just within the electric-car framework.