In the Hanjin Group's latest family saga, a feud has broken out between Cho Won-tae, the eldest son of the late former chairman Cho Yang-ho, and his elder sister, Cho Hyun-ah. The brother, 44, became the group's head following his father's death in April. The sister, 45, is widely known as the "nut rage" heiress.

Cho Won-tae is seeking reelection as a board member at a shareholders meeting of Hanjin KAL, the group's holding company, that will be held in spring. But the sibling squabble is clouding his chances.

Before his death, Cho Yang-ho instructed his family members to cooperate in running the conglomerate. Now there are questions as to whether this directive can be followed.

The feud came to light on Dec. 23, when the sister issued a statement through lawyers lashing out at her brother's management. 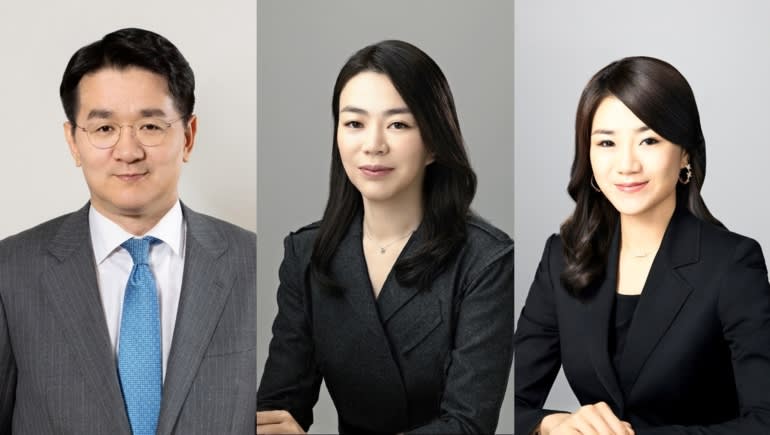 In the statement, Cho Hyun-ah claimed Cho Won-tae is not heeding his father's wish in managing the group and that he is insincere when it comes to family discussions.

In South Korea, a corporate group whose assets exceed a certain level is designated a "large-scale corporate group (conglomerate)" and is required to report who its chief is to the Korea Fair Trade Commission.

After Cho Yang-ho's death, Hanjin Group chose Cho Won-tae as its new head. But according to Cho Hyun-ah's statement last month, the brother was elected to the top post without a "substantive agreement" or "sufficient discussions" among family members.

Cho Hyun-ah gained infamy in December 2014 when as Korean Air Lines' vice president she boarded one of her company's commercial jetliners at John F. Kennedy International Airport in New York City, was seated, grew furious over how a flight attendant served her nuts and after a heated altercation ordered the aircraft to return to the gate before takeoff.

She later resigned over the "nut rage" incident only to make a comeback as an executive of another group company. But she was relieved of that post in 2018 over allegations that she illegally brought in luxury items from abroad using Korean Air Lines planes.

Referring to the possibility of Cho Hyun-ah returning to management, Cho Won-tae told South Korean media in November that neither he nor she had such plans.

The remark apparently ruffled his sister's feathers. Her lawyers expressed dissatisfaction in the statement, claiming that although there was no agreement about the sister's return to management, it was announced externally as if there had been.

The statement also made clear Cho Hyun-ah's intention to actively involve herself in management. "As a shareholder and heir, I want to discuss [the matter] while hearing the opinions of various shareholders for the group's development," the statement says.

According to the Segye Ilbo newspaper, Cho Won-tae visited his mother, Lee Myung-hee, at her house on Christmas Day and accused her of siding with Cho Hyun-ah.

The newspaper posted a photo on its website that shows a broken window and pieces of tableware scattered on the floor, reputedly the aftermath of the son's visit. The photo was reportedly taken by Lee with her mobile phone.

After the family feud became public, the mother and son issued a joint statement on Dec. 30 apologizing for worrying many people due to their "shameful" Christmas Day quarrel.

Cho Won-tae apologized to his mother and she accepted his apology, the joint statement says, adding that they "will continue to protect" the last instructions of Cho Yang-ho "through family unity."

But many people do not believe the dust has settled. It is unclear what kind of return to management Cho Hyun-ah might be seeking. Cho Won-tae has not responded to his sister's demand.

"I don't know what is happening among the family members," one Hanjin Group executive said.

But many group insiders seem to think Cho Hyun-ah wants to make a comeback as a board member and join the group's management and that she does not object to Cho Won-tae heading the group.

Each of the three siblings' stakes in the holding company increased to a little more than 6%.

The resulting inheritance tax is said to be about 60 billion won (about $52 million). Cho Hyun-ah, however, is unemployed, and borrowing money by putting up her Hanjin KAL stake as collateral will not be enough to pay her tax bill.

Some South Koreans now wonder whether the prospect of a regular paycheck might explain why Cho Hyun-ah seems to be maneuvering for a return to management.

Meanwhile, some believe Cho Hyun-ah opposes her brother heading Hanjin and regards herself as a suitable leader for the group.

They point to Cho Hyun-ah's complaint that Cho Won-tae was reported as group chief to the Korea Fair Trade Commission without a prior family agreement.

The focus now turns to whether Hanjin KAL shareholders will approve Won-tae's reappointment in March. If Hyun-ah opposes her brother's reappointment, a proxy fight could break out.

There are other parties with skin in the game. Hanjin-KAL's biggest shareholder is Korea Corporate Governance Improvement. The activist fund led by former securities analyst Kang Sung-boo holds a nearly 17% stake, which it has been building since the autumn of 2017. The South Korean fund is urging the family scandal-ridden Hanjin KAL and its subsidiary Korean Air Lines to accept its management reform plans.

Family members are a management staple of South Korean chaebols, but some market players believe KCGI is negative toward founding family involvement in Hanjin KAL. Market expectations are for Delta to side with Won-tae because the U.S. airline took its stake at his request.

The situation is in flux. Who will manage the company and who might come in as a partner remain up in the air.

Hanjin has a history of family fueds. After founder Cho Choong-hoon died in 2002, his four sons split into two groups, leading to the separation of the chaebol's heavy industry and finance divisions.

Hanjin Group faces the prospect of another split.