NEW YORK/TOKYO -- When SoftBank Group invested a further $2 billion in New York-based shared-workspace provider WeWork this January, it had valued the company at $47 billion. This week, it was reported that We Company, WeWork's parent, is exploring a target valuation less than half that size for its upcoming initial public offering, in the neighborhood of $20 billion.

The Japanese tech investment powerhouse has already booked nearly 200 billion yen ($1.87 billion) worth of unrealized losses for the quarter ended in June, much of it stemming from the sluggish share price of Uber Technologies, which listed this year.

The string of disappointing investments puts a dent in the legendary success of SoftBank and its chief, Masayoshi Son. But it comes at a time of newfound investor scrutiny of money-losing unicorns, or unlisted startups valued above $1 billion. Such companies once received a pass due to their growth potential, but stock pickers have grown more discriminating amid concerns of an economic slowdown.

SoftBank has spent over $10 billion so far buying a large chunk of The We Company.

WeWork's fate would affect not only SoftBank, but also the banks that have flocked to do business with the tech investor. Last year, the group paid $872 million in commissions to investment banks, data from Refinitiv shows, the highest amount in the past decade among private-sector corporations.

Japan's Mizuho Bank, in particular, rakes in tens of billions of yen in commissions from SoftBank in a good year, or one zero more than what other Japanese megabanks earn.

Even at its discounted valuation, The We Company remains one of America's biggest unicorns. The startup is preparing for a roadshow that could start next week, marketing itself to investors ahead of the IPO planned for this month.

But the stock debut could be delayed depending on the outcome of discussions between The We Company and SoftBank, according to a report by The Wall Street Journal on Thursday.

Unicorns that floated this year have seen contrasting receptions on the stock market. Shares of video conference startup Zoom Video Communications have performed well, but Uber has dipped nearly 30% from its initial offer price as of Thursday, while rival ride hailer Lyft hovers near all-time lows.

"Investors are going to be very cautious about wanting to make sure they don't lose money because they already saw Uber and Lyft," said Kathleen Smith, a principal at Renaissance Capital.

Uber, Lyft and The We Company share bleak prospects of turning profits. The We Company's net loss of $1.61 billion in 2018 approaches the size of total revenue. WeWork's parent has already booked $680 million in red ink for the first half of this year.

Uber, for its part, turned in a $5.2 billion net loss for the three months through June, the worst quarterly performance in the company's history. At the same time, Zoom is riding in the black. 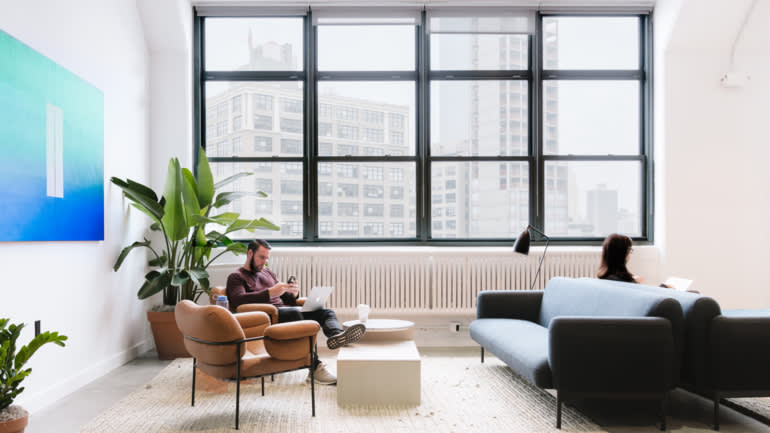 Another common thread among unicorns is the fact that most have launched services following the 2008 global financial crisis. "Most of their business models have not been tested fully," said Ilya Strebulaev, a professor at Stanford University and an expert on IPOs.

The We Company's revenue, based mainly on office rent income, flourishes in an expanding economy as a shortage of office space lifts rents. During a downturn, however, tenants will opt for smaller offices to cut costs or move out entirely. Contributing to The We Company's truncated valuation is the impression that what really propped up the startup was the U.S. economy rather than the business model.

The cases of Uber and The We Company also point to a wider epidemic of overfunding among unicorns, many of which have been rapidly burning through cash to scale their business but struggle to turn a profit.

"SoftBank Group's Vision Fund in particular has come to embody this new normal," CB Insights said in a July report.

The number of private funding rounds sized $100 million and above to U.S. startups nearly tripled between 2016 and 2018. After going public, the most lavishly funded companies tend to underperform those that raised less private capital, CB Insights noted.

For Masayoshi Son, however, such gambles seem part of the calculation. "Look across from a high vantage point, gather information and formulate a strategy," one rule goes. "If there is a 70% chance of success, go for it."

It is worth noting that Amazon.com hemorrhaged losses for years after its founding in 1997. Yet the tech pioneer weathered both the dot-com bubble and the global economic crisis to become one of the most valuable companies in history. SoftBank and its bankers are watching anxiously to see if Uber and WeWorks will become the next Amazon.