TOKYO -- Vietnam's stellar economic performance over the last few years has brought it to the attention of businesses worldwide and has also shone a light on its top performing companies that have become a force for foreign rivals to reckon with.

Among those rising stars is Vingroup, which began life as a property developer that has now grown into Vietnam's largest conglomerate focused on new technologies. It recently launched a smart TV called "Vsmart" that comes loaded with the Google platform, vying for local market share against established foreign players such as Japan's Sony Corp. and South Korea's Samsung Electronics.

Importantly, Vingroup, which is listed on the local stock exchange and has a market capitalization of 1.5 trillion yen ($13.7 billion), has the support of the government in the development of its businesses. The smart TV was manufactured in its new plant in the Hoa Lac Hi-Tech Park near Hanoi, which the Vietnamese government is keen to develop as a tech hub.

Vingroup also moved into automobile manufacturing, with the backing of the government, in 2017 and has spent about 400 billion yen equipping its facility in the northern port city of Haiphong with cutting-edge technologies.

The company is also collaborating with major foreign companies, such as Posco, South Korea's largest steelmaker, and Germany's BMW and Bosch in this venture. As the first stage of its operation, the plant in June embarked on producing sport utility vehicles and sedans. Although vehicle sales in Vietnam is low at around 300,000 annually, Vingroup has plans to produce 250,000 units initially and 500,000 vehicles in the future, hinting at its export ambitions. 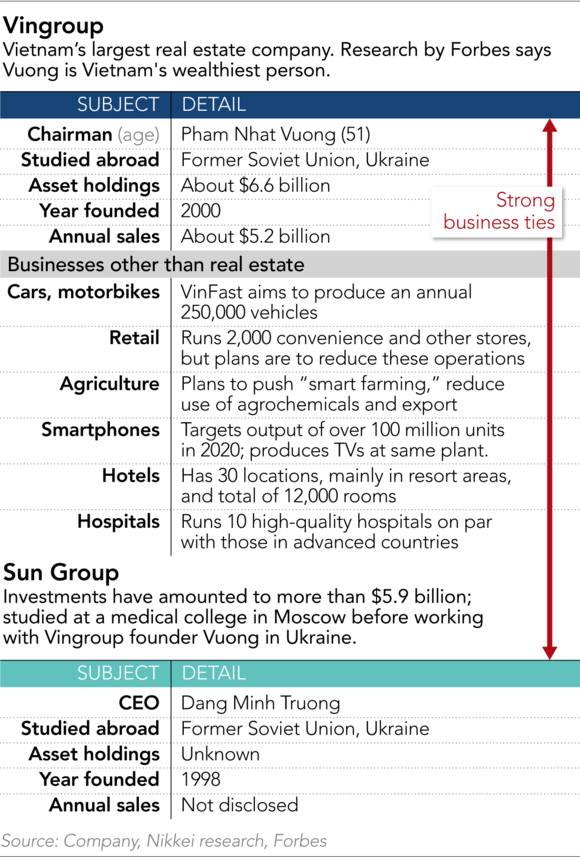 Vingroup's founder and chairman Pham Nhat Vuong is the wealthiest person in Vietnam, worth some 720 billion yen, according to Forbes. His success story mirrors that of many entrepreneurs in Vietnam who also started out in real estate.

One common factor is that they studied abroad in former Communist bloc countries. Vingroup's founder Vuong studied in Moscow, and started a restaurant business in Ukraine. He soon developed it into the production of instant noodles and then the development of dehydration apparatus used to make instant noodles. In 2009, he sold his company that dealt in dehydration systems to Nestle, a Swiss multinational food and beverage company, for $150 million, making the seed money to start a real estate business. 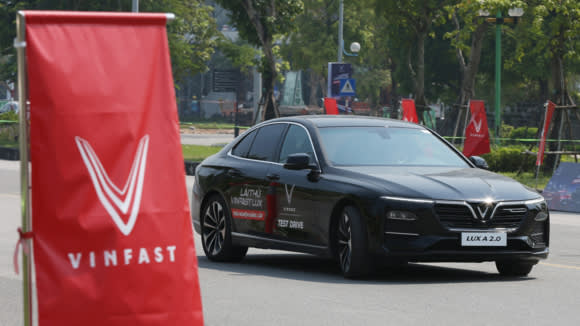 The chair of Sovico Holdings, Nguyen Thi Phuong Thao, also studied in Moscow in 1988. While there, she began to import rubber, fax machines, clothing and consumer goods from Japan and South Korea to sell locally. By the time she completed her studies, she had earned about 100 million yen. Using that money, she and her husband started a real estate business. Late in 2011, the Sovico group established the low-cost carrier Vietjet Aviation, which now rivals Vietnamese flagship carrier Vietnam Airlines in market share. 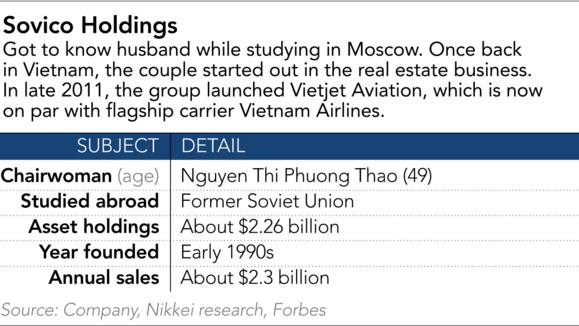 In large part, these entrepreneurs also formed important relationships while they were abroad that helped their careers later on. The Vietnamese government had sent many bureaucrats to former Communist bloc nations from the 1980s onward who formed a close-knit diaspora. For these entrepreneurs, the personal connections they formed with government officials there subsequently helped them in the process of gaining administrative authorization for the acquisition of land for business projects and other permits and licenses.

For example, Nguyen Thi Nga, chair of BRG Group, is well known for her political clout. In the 1990s, she ran a trading company in Hanoi that conducted business with former Communist bloc nations. There has been speculation that her father was a former head of state, although that rumor has never been confirmed.

In another example of the small circle in which the Vietnamese diaspora operated, Dang Minh Truong, CEO of Sun Group, one of the largest real estate developers in the country, studied at a medical college in Moscow, and subsequently worked for a company that supplied dehydration devices established in Ukraine by Vuong, the founder of Vingroup. These businesses also benefited from the property boom in Vietnam. In the early 2000s, investments in real estate surged. This was followed by greater inward foreign investment after Vietnam's accession to the World Trade Organization in 2007.

A recent report by Savills Vietnam, a property advisory company, showed that condominium prices in Hanoi had moderated somewhat in the first quarter of 2019. Yet land prices in the urban centers of major Vietnamese cities have still continued to climb, with property prices also rising in regional towns due to ongoing development projects in tourist resorts such as Danang and Phu Quoc Island. Such rapid growth in the property sector is matched by Vietnam's economic expansion. Gross domestic product growth is forecast to reach close to 7% for the whole year, the highest among Southeast Asian nations.

A growing number of multinational corporations are now relocating their manufacturing operations in China to Vietnam to avoid being hit by the U.S.-China trade war. Consumer spending is also rising due to an expanding middle-income group. Aeon, a major Japanese supermarket chain, on Dec. 5 opened its fifth store in Vietnam, and Uniqlo, a Japanese casual clothes retailer, on Dec. 6 launched its first shop in the country.

Buoyed by such a positive economic environment, conglomerates that evolved from property businesses are likely to increase their presence even further as a driving force behind the Vietnamese economy. Their main challenge is to improve corporate governance and social responsibility in order to bring in investors.