Online streaming service Leshi struggles to turn itself around 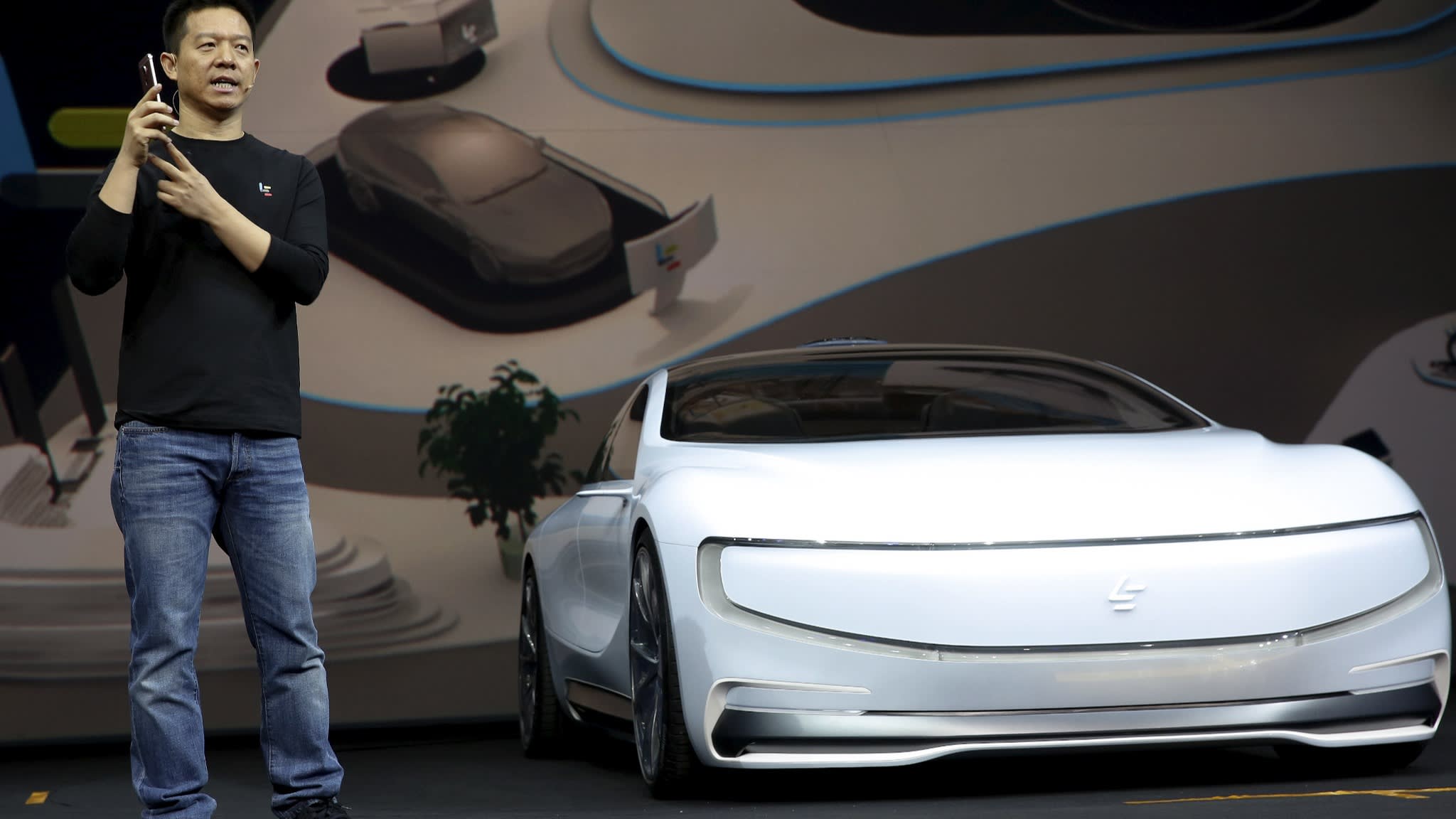 DALIAN, China -- Video streaming service Leshi Internet Information & Technology is struggling to regain its financial footing as an ill-conceived push to diversify has left the company with a negative net worth.

The owner of a Leshi smart TV store on the outskirts of the northeastern Chinese city of Dalian stares at his unsold inventory and muses that he can no longer keep the store open. There are no customers in his 30-sq.-meter shop.

The owner opened the store in 2015, when Leshi was growing fast. Back then, he sold around 300 TVs a year, thanks to the company's bundled service packages that include a low-priced flat-screen set and video content.

But sales began falling off following reports of Leshi's sluggish earnings in 2017. Last year he sold fewer than 100 sets. He says he may switch to selling TVs from rival Xiaomi.

Leshi logged a net loss of 2 billion yuan ($298 million) for the year through December 2018 on sales of 1.6 billion yuan, down 78% on the year, according to preliminary figures published in late February.

That was an improvement from the 13.8 billion yuan net loss the year before, but the company remains stuck in the red due to falling subscriptions to its service. The company's financial problems have tarnished its image, making a turnaround harder. 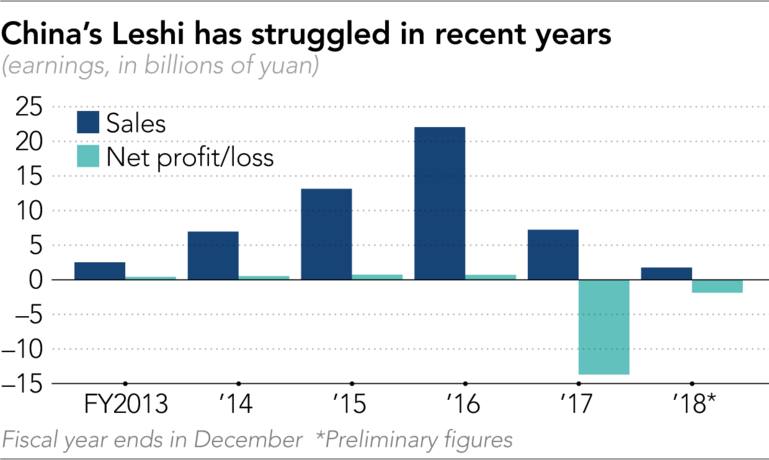 Leshi said it plans to release official results in late April, adding that its final numbers could change significantly from initial estimates. The company also hinted that it might be delisted from Shenzhen's technology-heavy ChiNext stock market.

Founded in 2004, Leshi was once a key unit of the LeEco conglomerate. Its earnings grew rapidly as its video streaming site became as popular as rival Youku (now known as Youku Tudou).

The company's branded smart TVs and smartphones, which were rolled out in 2015, became big hits. Leshi founder Jia Yueting was hailed as "China's Steve Jobs."

But an overambitious push to diversify, including investments in foreign companies and a move into electric vehicles, brought trouble. In 2016, it was revealed that the company had unpaid bills to a Taiwanese smartphone component maker. There was a series of reports of financial problems at Leshi, including unpaid construction costs for an auto factory and a failed deal to buy a foreign company.

Despite this, Jia stayed in the U.S. as the crisis deepened, preferring to focus on the development of electric cars. In June 2017, a court ordered the seizure of shares held by Jia and his family over delayed debt payments. 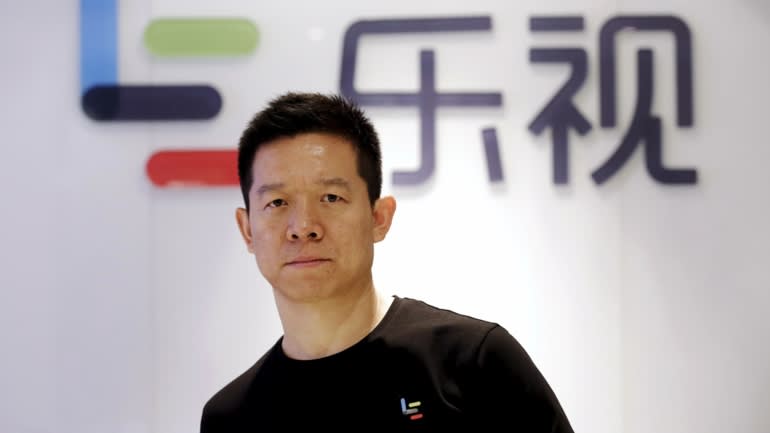 Leshi founder Jia Yueting has stepped down as chairman, but continues to run the company's electric car business.   © Reuters

Jia stepped down as chairman and was replaced by Sun Hongbin, chairman of property developer Sunac China Holdings and a major Leshi shareholder.

In the short term, there is little Sun can do to shore up Leshi's financial standing. As of the end of June 2018, the company's debts exceeded its assets by 470 million yuan. The company has been servicing its debt, but there is no way to whittle it down quickly, according to a company representative.

Meanwhile, the risk of bankruptcy continues to rise because Leshi has no cash to invest in new businesses and has so far failed to find a corporate backer. The company could survive if Jia, who continues to run the electric car business, can make that bet pay off. But for the moment, the outlook remains bleak. Jia is locked in a financial dispute with developer China Evergrande Group, which was a partner in Leshi's electric car operation.

Despite Leshi's predicament, the market for video streaming, the company's main business, has been expanding steadily in China. Initially, most content was user generated, or TV programs and reruns of movies, most of which could be viewed for free. But as the market matured, companies began looking for "killer content" to attract paid subscribers in an attempt to resolve copyright issues and stand out from their rivals.

The video streaming market has taken off since 2015, reaching 36.2 billion yuan in 2018, a sevenfold expansion from three years earlier. With fewer people watching TV and a wide variety of online content available, the number of paid streaming subscriptions is increasing.

Leshi's competitors, including Alibaba Group Holding's Youku Tudou, Baidu's iQiyi and Tencent Holdings' Tencent Video, focused on producing dramas. Lavish period pieces, such as "Story of Yanxi Palace," proved popular among paid subscribers, who are mostly women. But Leshi has lagged behind its rivals in this area, hurting its overall performance.

Leshi opted instead to purchase exclusive rights to sporting events, including overseas soccer matches, an expensive move that proved less successful in attracting viewers. The company hired a well-known movie director to create dramas, but it ran into financial trouble. Leshi-produced content was not among the top internet dramas last year. These missteps have contributed to falling paid subscriber numbers, further darkening the company's outlook.