OSAKA -- Panasonic plans another round of restructuring of unprofitable businesses, responding to sinking profits with the same prescription that has restored the ailing giant to health before. Yet the company will need more than cutbacks to thrive in an electronics industry searching for new growth avenues as prices slide.

The proposal drawn up by Panasonic's business planning department, based on President Kazuhiro Tsuga's ideas, calls for reforms to six money-losing businesses.

The company plans to halt one of its two production lines for liquid crystal display panels at its Himeji plant in Hyogo Prefecture, and to sell off equipment from the line. 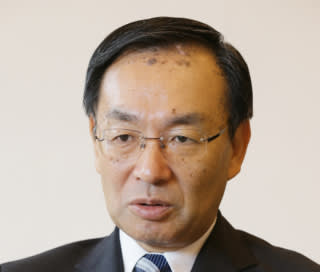 President Kazuhiro Tsuga has led an ambitious restructuring program over his five years in charge of Panasonic.

Panasonic will also consider reworking its domestic manufacturing structure for residential solar power systems. In the chip business, the company is weighing unloading shares in a joint venture with an Israeli enterprise.

Three other businesses units -- digital cameras, private branch exchange telephone systems and optical disk drives -- will be dismantled. Each will be scaled back and placed under the umbrella of other operations, with headcount to be reduced.

These six businesses are expected to report aggregate sales of roughly 380 billion yen ($3.42 billion) in the fiscal year ending March 31, accounting for about 5% of the total, and operating losses totaling about 46 billion yen.

Panasonic booked net losses totaling more than 1.5 trillion yen across fiscal 2011 and 2012 owing to missteps in such areas as plasma televisions. With survival at stake, Tsuga -- who took over in 2012 -- embarked on a sweeping restructuring program.

Panasonic ended TV production in the U.S. and China, exited the Japanese consumer smartphone market, stopped making plasma televisions and displays, and sold some chip plants and its lead-acid battery operations. These improvements brought the company back into the black, with annual net profit topping 100 billion yen from fiscal 2013 on. Markets applauded Tsuga's adroit handling of the situation, contrasting the quick action taken by Panasonic with the foot-dragging of peers such as Sharp.

But profits are slumping again. Panasonic has stayed in much the same fields, and its ability to compete on price is falling across a wide range of products. The company was forced to downgrade profit forecasts in fiscal 2015 and 2016.

Panasonic sees net profit dropping 20% to 130 billion yen this fiscal year and expects sales to slip 4% to 7.35 trillion yen, the lowest since fiscal 2012. Restructuring may reduce fixed costs, but it does not help cultivate new profit sources. The company has also put off steps to reform unprofitable businesses. Mid-level employees complain of a sense of stagnation.

This round of restructuring aims to end the last of the losses from individual businesses and create a structure that will put the company on a path to renewed growth. The fields that Tsuga plans to put front and center -- automotive and housing-related products -- are expected to enjoy solid growth but are not exactly new. The current plan limits itself to dealing with money-losing businesses, rather than going further and restructuring Panasonic's portfolio or shifting focus to services.

Major electrical equipment makers worldwide have had to reckon with the commoditization of products -- a lack of differentiation that drives prices lower. General Electric responded by buying the energy business of France's Alstom while selling its appliance operations. Hitachi acquired an Italian rolling-stock business and took leasing and logistics operations off its consolidated books. These examples have not escaped Tsuga's notice.

This fiscal year, Panasonic will "work on concentrating on core competencies and set a deadline for reform," the president said at a meeting early this year attended by all employees. He targets operating profit of at least 250 billion yen in fiscal 2018, Panasonic's 100th anniversary.

New profit drivers will be a must if Panasonic hopes to double operating profit within two years. The company has started to lay the groundwork through such steps as its partnership with Tesla on automotive batteries. The fate of one of Japan's biggest names will depend on reform that goes beyond restructuring.