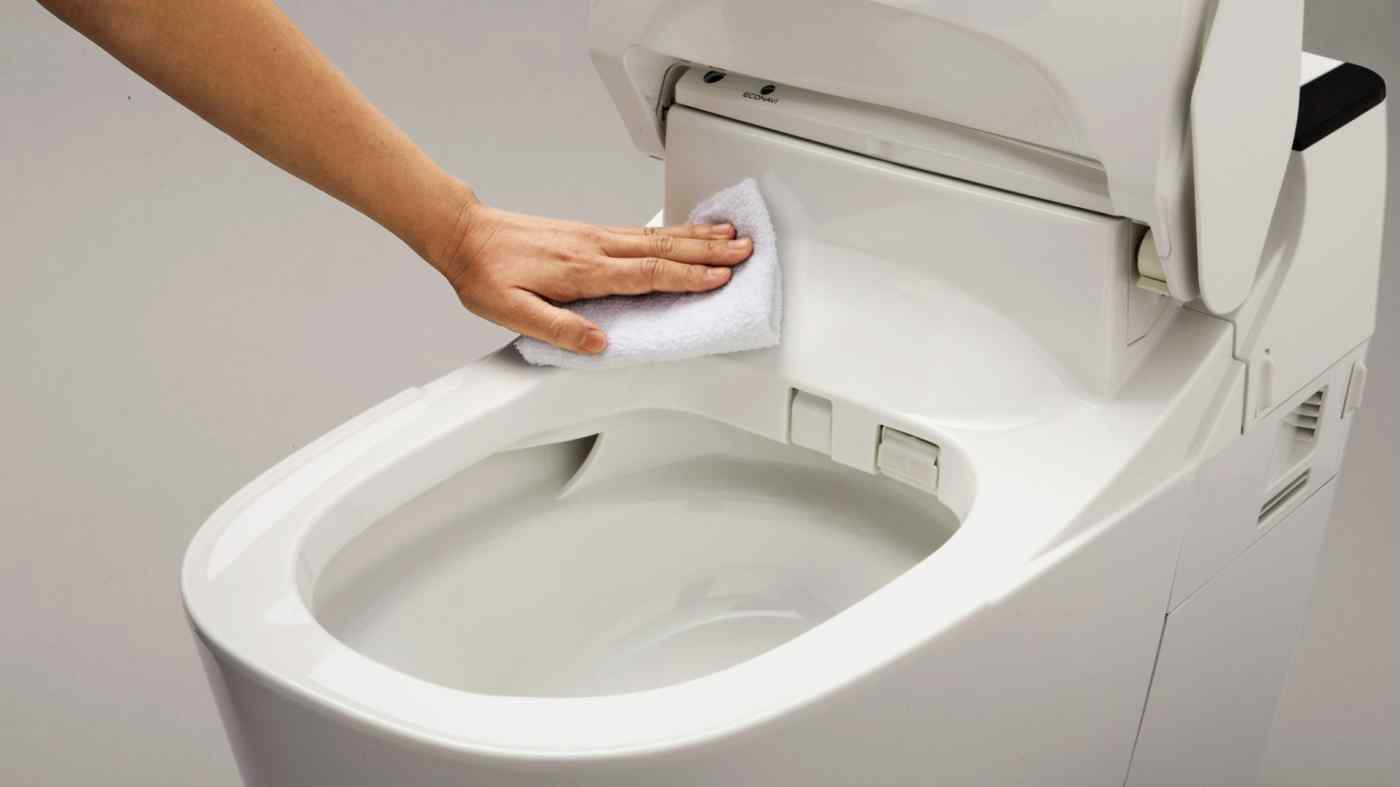 A relative newcomer to a field long dominated by such ceramics giants as Toto and Lixil, Panasonic is turning its expertise in plastics toward creating uniquely stain-resistant products.

At the company's research lab for toilet products in Kadoma, Osaka Prefecture, part of the floor is covered with rows of bowls in various shapes, each facing a pole from which a jet of water pours in. At the foot of each bowl is a mat that keeps track of splashes.

The units simulate how urine splashes inside the bowl or onto the floor. The devices may appear simple, producing a jet of water at the push of a button, but the shapes of the bowls and the water outlets are among the company's top secrets.

"When a male urinates, the urine spins two and a half times before hitting the surface," said Hiroshi Matsunaga, a senior researcher in Panasonic's sanitary planning and development department. "You may not know it, but the stuff lands on the floor, not just on the edge of the bowl." Panasonic's lab in Osaka conducts various simulations to see how urine splashes inside the bowl or onto the floor.

One invention born there is a bowl that makes the water foam with the help of a solvent, dissipating the impact of the urine and preventing it from splashing outside.

In another product, the surface of water automatically drops by about 3 cm when the seat is lifted. This function, developed a few years ago, minimizes the risk of droplets jumping outside the bowl.

Though more moldable than ceramics, standard plastics are less durable and harder to clean. Panasonic has developed a type of plastic glass that is strong enough to be used in aquarium tanks and aircraft windshields and also collects less limescale than ceramics.

Having launched its toilet business in 1963, Panasonic was a latecomer in the industry. It bought the ceramics maker Hokuriku Yogyo to gain expertise in sanitary ceramics but struggled to reduce the number of defective parts. Then, in 2006, the company hit the jackpot when it debuted a product called the Alauno.

The Alauno features a plastic bowl created with molding technology the company developed in its electronics business. It defied the common perception that plastics soil quickly and break easily.

Thorough research on filth in bowls was the key to the development of this product.

In a refrigerator at the lab are a row of plastic bags containing brown paste -- imitation feces made of materials including miso bean paste, oil and a thickener. Panasonic's Alauno features a plastic bowl developed with its molding technology honed in the electronics business.

Human bowel conditions vary from person to person and day to day. To make realistic simulations, researchers have developed five types of fake feces, including "hard" and "spattering" ones, and patented them.

"Crud on toilet bowls is basically just oil," Matsunaga said. He started by creating feces-like substances, thoroughly studied them and their effect on toilet bowls, and finally developed a solvent for the Alauno. When the user adds the solvent, the liquid dissolves into the water when the toilet is flushed, producing foam.

Although Panasonic sells a special solvent for the toilet, any dishwashing detergent can do in a pinch, said a company official.

The new normal under the pandemic has created a unique opportunity for Panasonic. With people staying home longer, toilets need cleaning more frequently. In a consumer survey the company conducted recently, the largest proportion -- 27% -- said the bathroom is where their cleaning workload has increased the most.

Thanks to its expertise in forming plastics, Panasonic is more flexible in product design, eliminating hard-to-clean gaps in key components, including the seat and the lid.

Legend has it that Panasonic founder Konosuke Matsushita was quick to give the green light when asked about the possibility of developing toilet products at a company meeting around 1960: "Sure, there's no home without one. We make home products, so it's a natural extension. Go ahead." His lighthearted comment surprised many who had expected him to reject the idea.

The company produced portable toilets in 1963 and flush models in 1973, followed by electronic bidet products in 1979. The business was kept alive by the company's motto of "stick with what you started until it achieves success." By the early 2000s, the business was struggling after being left far behind by its two main rivals, but Panasonic persisted, focusing on strategic products.

The main challenge going forward is to develop overseas markets. In China, where Panasonic first debuted toilet products in 2013, the company plans to expand lineups this year. It previously sold only low-priced models there but has started introducing high-end products, including new models that use water with sterilizing ozone to clean the bowl.

Now Panasonic is ready to take advantage of being a latecomer. Free from the restrictions of existing business relationships, it plans to bring its products directly to COVID-wary consumers through online malls.