JAKARTA -- Indonesia's state-run oil company Pertamina is rushing to ramp up its oil refining capacity as demand sharply increases at home. It recently acquired oil concessions in Malaysia and signed a string of partnership deals with foreign energy companies. 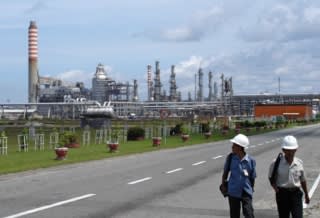 Workers walk at a Pertamina oil refinery in Indonesia. The state-run oil company is buying concessions overseas to meet demand at home.

Pertamina is also reducing its investments in property and other non-core businesses to help President Joko Widodo's administration bolster the oil industry.

The company has bought 30% of U.S.-based Murphy Oil's oil and gas assets for $2 billion in Malaysia's Sabah and Sarawak states on the island of Borneo. Pertamina acquired these concessions in stages through the end of February. It did so in a cash transaction through its subsidiary, Pertamina Malaysia Eksplorasi Produksi, which handles exploration and production processes for the company.

Pertamina has acquired drilling rights at six oil and gas sites, three of which are already pumping out 43,000 to 45,000 barrels of oil a day. The company expects to boost daily output to 50,000 barrels by 2018. It has also opened a new office in Kuala Lumpur since the Murphy acquisition.

Since 2013, Pertamina has been on the buying spree, snapping up concessions in countries such as Algeria and Iraq. These moves come amid rising oil demand in Indonesia. Widodo aims to bolster the capacity of domestic refineries, so the state-run oil company has set its sight on Malaysia to secure stakes in promising nearby oil and gas fields.

Indonesia, an oil producing country, has been a net importer of the fuel since 2003. Motorization has raised domestic gas consumption, but the country has not built any new oil refineries, resulting in deeper dependence on imports.

To prop up the sector, the Indonesian government is working to expand domestic refining facilities. Last December, Pertamina formed partnerships with Saudi Arabian state-run company Saudi Aramco, China Petrochemical, known as Sinopec and Tokyo-based JX Nippon Oil & Energy to double the combined daily capacity at five refineries from 820,000 barrels to 1.68 million barrels by 2025. It will likely cost $25 billion to upgrade the refineries.

With its onshore oil fields nearing their limits, Indonesia will have to pay the high prices required to develop offshore and deep-water oil fields to increase domestic capacity. Therefore, the crude oil it buys overseas plays an important role in boosting refining at home.

However, Pertamina's net profit dropped nearly 20% from a year earlier during the January to June period of 2014. The decline was in part due to a rise in general administrative and sales expenses. Moreover, a sharp fall in rude oil prices starting from the second half of last year has hurt its earnings.

The company has cut its 2015 investment plan by about 40% to $4.4 billion. In addition, it has decided to put a plan to build a 99-story high-rise building in Jakarta on hold.