JAKARTA -- Pokemon Co., responsible for brand management and licensing of the popular Japanese franchise, is partnering with Indonesian conglomerate Salim Group as it looks to expand its presence in Southeast Asia's largest market.

The partnership, announced on Thursday, will see the Indonesian version of the popular Pokemon card game sold at Salim's convenient stores as well as fast-food chain KFC.

The instant-noodle-to-autos conglomerate has one of the largest retail networks in the country, with nearly 17,000 Indomaret convenient stores dotted across the archipelago. While the cards will be sold mainly in Greater Jakarta, the Japanese company hopes Salim's network can help it penetrate more remote parts of the country.

"We were already seeing high interest from Indonesian fans [for Pokemon cards] and now was the time for us to have an Indonesian version," said Axton Salim, executive director at Salim Group. "We hope to grow [Pokemon cards] as much as possible."

Pokemon enjoyed a surge in popularity in 2016 when the smartphone game "Pokemon Go" was released in the country, but for fans there were few licensed products. Pokemon Co. wants to further establish the franchise in Indonesia by looking at other licensing opportunities and restarting broadcast of its anime series, which ended several years ago.

The move into Indonesia is the latest step by the company to establish a larger foothold in Southeast Asia, a region it has largely ignored. The company struck a similar deal with Thai conglomerate Charoen Pokphand Group in February, resulting in the release of Thai-version Pokemon cards. It also opened The Pokemon Centre retail store in Singapore's Jewel, a $1.24 billion commercial, entertainment and garden complex at the city-state's Changi Airport. "It will be hard for us to further expand our main market of Japan, the U.S. and Europe," said Kenjiro Ito, chief business officer at Pokemon Co. "That is why we created a dedicated department for Asian expansion, and decided to tie partnerships with local companies in individual countries.

"We want to create local Pokemon with our local partners, and market that in local markets," he said, adding that Southeast Asia's young demographic makes the region more conducive to building familiarity with the characters.

The conglomerate announced a joint venture with a German company earlier this year to host esports tournaments, hoping the fast-growing industry will help it market its products to youth. Salim is looking for similar results with the Pokemon tie-up.

According to Japan's Ministry of Internal Affairs and Communications, the content market in Japan was worth about 11.8 trillion yen ($111.2 billion) in 2017. During the same year, the value of exports of broadcast content such as anime rose 13% from 2016 to 44.4 billion yen. Asian countries comprised the largest overseas market, accounting for about 60% of the total. 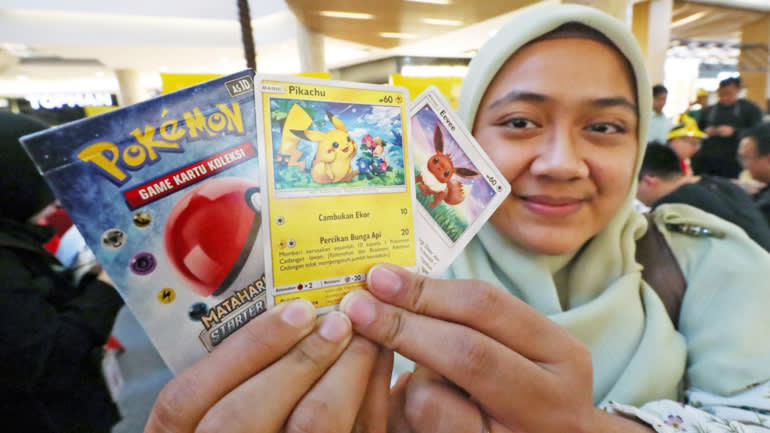 A woman shows off Pokemon cards at a news conference in Jakarta on Aug. 8. (Photo by Rie Ishii)

Apart from Pokemon, Sanrio -- the company behind Hello Kitty -- is developing an indoor theme park in Hanoi, Vietnam, while Kumamon -- mascot of Japan's Kumamoto Prefecture -- has partnered with Thai conglomerate Saha Group to roll out Kumamon-branded products in the country.