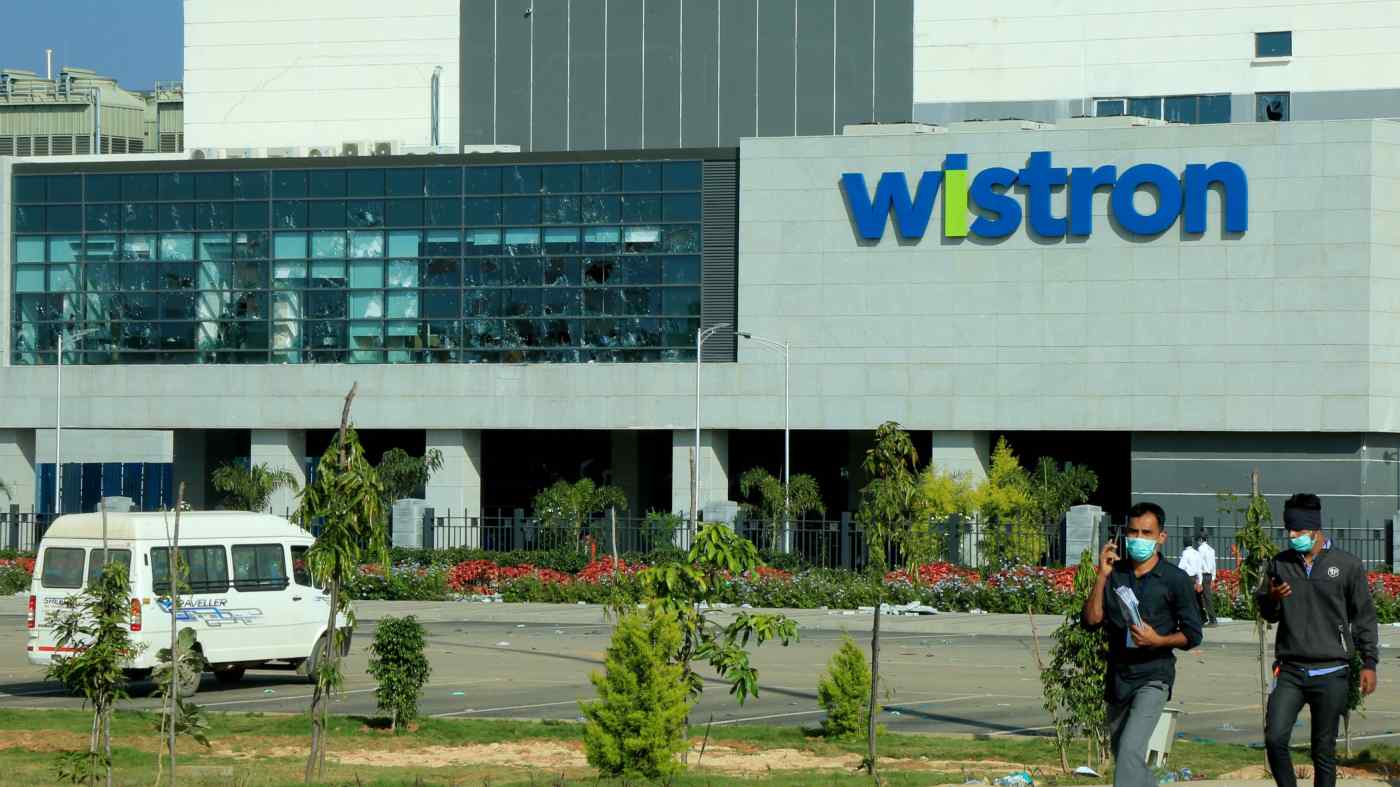 NEW DELHI -- When workers at an Apple supplier's plant in southern India ransacked the facility earlier this month, they did more than cause millions of dollars in damage. They also raised the specter of India as a country in the grip of powerful trade unions.

It is not an image that squares well with Prime Minister Narendra Modi's push to turn the country into a manufacturing powerhouse. Modi wants global companies to consider India as an alternative to China for at least some of their supply chains, especially given the chronic trade tensions between Washington and Beijing.

The incident in question occurred in the state of Karnataka at a facility where Taiwanese electronics maker Wistron assembles iPhones. Contract workers there were reportedly angry over unpaid wages. Wistron said in a stock exchange filing that the damage will cause an estimated loss of between $3.5 million and $7 million, but it has not otherwise commented on the issue beyond a brief statement pledging to assist the investigation and support employees.

While some have taken the violence as a sign that India is not yet ready to join China as a major manufacturing hub, Indian officials say that the incident is an isolated one and that business conditions are improving.

"The culture of strikes has come down substantially in India," said M.S. Unnikrishnan, chairman of the capital goods committee at the Federation of Indian Chambers of Commerce and Industry. The Wistron incident, he added, is an "isolated" case.

Unnikrishnan also disputed the notion that workers in India are overly eager to strike or otherwise disrupt business. There have been only a handful of big strikes in the past decade, he said, and in each of those situations the workers involved were "frustrated and had pent-up feelings ... because of the promises not kept. This disparity [between workers and management] is beyond social acceptance in the 21st century."

According to Unnikrishnan, the main issue for most workers is whether a company is being fair to them. "Wherever there's a fairness quotient deficiency, there will be trouble," he said.

Additionally, the government recently passed a law that makes it tougher for unions to strike, and companies are increasingly using contract workers, who are not unionized.

Madan Sabnavis, chief economist at CARE Ratings, said labor troubles will not pose a deterrent for investors. "All investors are aware of the labor laws, but they look at a whole gamut of things," including demand, capacity, access to raw materials and the overall policy framework, he said.

While labor issues are "a negative factor, [investors] come in prepared. They also know that in a developing country there's always some problem. But at least we are a democracy, and that's one of our biggest strengths," he said.

Indeed, Pegatron, another Taiwanese company, recently confirmed that its plans for India remain on track despite Wistron's recent trouble. The world's second-largest iPhone assembler, after Foxconn, Pegatron is building a manufacturing facility near Chennai, the capital of Tamil Nadu state, and is set to start production by the second half of 2021.

"We don't expect that the mega-trend of suppliers needing to build some production capability internationally is going to change ... and India is a place with [manufacturing] potential," Pegatron Chairman Tung Tzu-Hsien told reporters at a recent event in Taiwan. "It's like when we went to build production sites in China two or three decades ago. There were a lot of infrastructure issues. I think things will improve and get better."

But that does not mean it will be easy for foreign companies to navigate India's unique labor landscape.

Union activity in India traces its roots to the early 1920s, when it was a British colony. Those fighting for the country's freedom realized it was necessary to "cripple its economic machinery," said professor A. Venkataraman, who teaches human resources at the Faculty of Management Studies at the University of Delhi. This led to the start of large-scale, politically backed organized strikes, Venkataraman said, as well as the formation of the All India Trade Union Congress, the country's oldest union, which is affiliated with the Communist Party of India.

More recent clashes between unions and foreign businesses, experts say, have stemmed from a mix of cultural misunderstanding and frustration over working conditions.

In 2012, an altercation between workers and management at Maruti Suzuki India's plant at Manesar, in the northern state of Haryana, resulted in a fire that gutted the facility and killed one manager.

While the incident was sparked by a manager allegedly using caste-based slurs toward a worker, the underlying tensions went back years. Full-time employees, angry at the growing use of lower-paid contract workers, had been pushing for higher wages and the right to unionize.

Another example came in the mid-2000s, when Honda Motorcycle and Scooter India fired 2,700 workers after days of them adopting go-slow tactics and going on a hunger strike at its Gurgaon plant to protest the firing of four colleagues and unmet demands. The tipping point for that flare-up was a Japanese manager who reportedly went around with a stick to measure productivity and patted a Sikh employee so forcefully that his turban fell off.

While such eruptions can make India's workforce appear volatile, Venkataraman said they are usually the result of years of frustration. "Generally unions don't resort to a strike at the outset," he said. "There's a pressure building up."

Some of those pressures include a mindset common in parts of India where anyone in a position of power has a tendency to wield it, he added, as well as a potent "cocktail of issues" including caste, gender and social backgrounds.

Auto manufacturers in particular are increasingly using contract workers, many of whom are first-generation factory workers from agrarian families. "There's a lot of class tension," he said, adding that contract workers often do not have a channel to communicate their grievances to management.

Keeping India's manufacturing ambitions on track means protecting -- and when necessary punishing -- both workers and companies, according to Biju Varkkey, who teaches human resource management at the Indian Institute of Management in Ahmedabad.

"The government should act swiftly against those who indulge in violence so that confidence about the rule of law in India is reinforced to investors," he said. "Equally, it applies to those who have refused to comply with the law of the land, in terms of not paying workers or denying their rights."