Qatar Petroleum's decision to integrate Qatargas and RasGas, the two units, follows moves by Australian and U.S. rivals to increase production, aggravating a persistent global LNG glut. With the prolonged oil price slump having also affected the market, LNG spot prices are hovering around $7 per 1 million British thermal units -- roughly half the peak of over $15 in 2014.

With annual production reaching 41 million tons, Qatargas is the world's biggest LNG producer, followed by RasGas, which turns out 36 million tons. To say the new company will have a formidable global footprint would be putting it mildly. 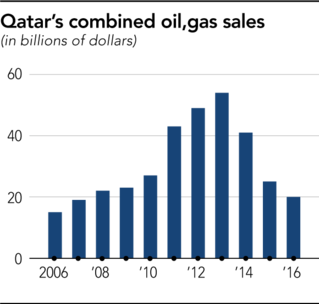 Late last year, Qatar Petroleum said it wanted to form a united front in the international market. The merged company will inherit the name Qatargas.

There is little reason to think the headwinds will die down anytime soon. The European economy remains sluggish, while China's slowdown is limiting its thirst for energy. These and other factors mean demand is unlikely to grow as steadily as it once did.

The emergence of Australia and the U.S. as major LNG exporters has also changed the game. Australia, in particular, is expected to soon overtake Qatar as the world's No. 1 exporter of the fuel.

Other countries, including Russia and Indonesia, are also expanding their production facilities.

Qatar, with its annual production capacity of 77 million tons, has maintained a strong position thanks to long-term supply contracts with overseas customers. But with key contracts approaching expiry, the outlook is growing murky.

Contracts with Japanese customers like utility Chubu Electric Power are to expire in 2021, after 25 years of steady annual shipments of 7 million tons.

Qatar Petroleum CEO Saad Sherida Al-Kaabi told a news conference that the integrated Qatargas will also be more competitive when it comes to recruiting top-tier talent, which is increasingly hard to come by as rivals battle it out in Asia.

According to Qatargas' website, shareholders besides Qatar Petroleum include oil majors such as ExxonMobil of the U.S., Japanese trading houses Marubeni and Mitsui & Co., and Japanese oil companies Idemitsu Kosan and Cosmo Oil.

Japan's government and businesses played a key role in supporting Qatar's LNG industry in its infancy. The 25-year contracts are among the fruits of that period. When the Middle Eastern country started shipping LNG in 1997, it all went to Japan. Reflecting the long-standing relationship, Qatargas' CEO visited Japan soon after the March 2011 earthquake and tsunami, and offered to provide emergency supplies.

But Qatar, which depends heavily on natural gas proceeds, also needs to adapt with the times. The government expects to fall into a budget deficit for the second straight year in 2017, even though it has slashed spending by 5% in real terms and expects a 15% increase in revenue.

Qatar Petroleum and Qatargas remain major employers, but given the harsh market conditions, the government now feels it has too many eggs in one basket. It hopes to build a more diverse industrial sector, using its role as host of the 2022 soccer World Cup as a springboard.