TOKYO -- Online retailer Rakuten is set to make a splash in Japan's mobile phone market, which has long been dominated by three major carriers.

The e-commerce giant with operations in retail, travel and financial services has cleared the final administrative hurdle on the path to launching a mobile carrier business.

On April 9, Japan's  Ministry of Internal Affairs and Communications granted the company approval to operate as a carrier, adding a fourth player to the battle between NTT Docomo, KDDI and SoftBank. Rakuten will become the industry's first newcomer in 13 years. The last, eAccess, later merged with SoftBank.

In contrast to existing players, which all started as mobile carriers before adding related services, Rakuten is taking the opposite approach -- targeting its existing e-commerce customers with a new mobile service.

While working for Industrial Bank of Japan, now a part of Mizuho Financial Group, Mikitani was tasked with handling SoftBank's overseas acquisitions for Masayoshi Son. 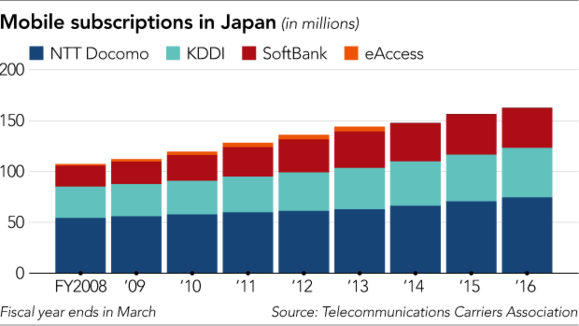 Some industry insiders now regard Rakuten as a potential threat due to Mikitani's political ties.

"Everybody present here is an entrepreneur who is not afraid to take risks," said Japanese Prime Minister Shinzo Abe at a New Year party of the Japan Association of New Economy, a business lobby headed by the Rakuten CEO, in late January. "Mikitani-san, of course, loves risk."

In 2015, Abe ordered a study into ways mobile prices could be lowered, claiming existing levels were too burdensome for households.

Rakuten already operates a discount smartphone service using equipment rented from larger carriers. With ministry approval, it can become a full-blown carrier with its own infrastructure.

The company plans to launch its service in October 2019 at prices about 30% lower than existing players, once the network has been set up.

But it is unclear if low prices alone can pry customers away from the established carriers and building a network from scratch presents numerous challenges.

Rakuten at present has only around 50 wireless engineers. NTT Docomo and other big players, by comparison, have between 1,500 and 3,000.

Base stations are second concern. Rakuten plans to use simple concrete poles for about 20,000 of a planned 27,000 stations. This will minimize costs but critics say the poles are susceptible to earthquake damage.

A third issue is investment. Rakuten foresees spending an initial 600 billion yen ($5.6 billion) or so to establish a fourth-generation wireless network. But launching in October 2019 would coincide with the commercialization of 5G, raising the possibility that more funds would be needed to remain competitive.

Despite the risks, Rakuten is confident that it can not only get its e-commerce customers on board, but also provide them with an entire "ecosystem" of connected services. Registered users are prompted to switch to the company's existing mobile service through various campaigns and the company envisions pitching benefits it is in a unique position to offer, such as using Rakuten Ichiba reward points for mobile phone bill payments.

Rakuten Ichiba is reported to have more female shoppers than Amazon Japan and other e-commerce sites, and the company hopes housewives, who often hold the purse strings in Japanese households, will shift en masse to the new carrier.

The country's mobile market has already reached a saturation point due to factors such as the shrinking population.

Under the circumstances, they are rapidly developing new business areas, primarily services integrating telecommunications with e-commerce and financing.

Having already established itself in these fields, Rakuten could hold the trump card. SoftBank President Ken Miyauchi acknowledged that Rakuten's entry into the mobile market "poses a threat."

When smartphones became popular in the 2010s, the main battlefield shifted from voice calls to data communication.

That era has now run its course and competition is developing into a turf war over "ecosystems" where telecommunications are integrated with e-commerce and other services.

KDDI President Makoto Takahashi said, "The time has come when we become conscious of each other's economic zone."