MANILA -- Philippine Long Distance Telephone, the leading telecommunications company in the Philippines, continues to build up its digital muscle.

PLDT, as the company is known, recently acquired a Singapore-based e-commerce startup and invested in a Malaysian online video service provider. The Philippine company has also teamed up with U.S. broadcaster Fox to provide movies, sports and other TV programming.

All this is an effort to shore up earnings in the face of stiff competition from the No. 2 player, Globe Telecom.

In late August, PLDT announced it will buy Singapore's Paywhere, through a subsidiary, for $5 million. Paywhere's cloud-based e-commerce platform, TackThis, has 30,000 registered users across Southeast Asia.

Philippine consumers are taking to online shopping as low-priced smartphones spread and economic growth pushes up income levels. The two companies have been working together since last year.

PLDT last year made another move aimed at raising its online profile: It spent 333 million euros (about $445 million at the time) to acquire a 10% stake in Germany's Rocket Internet, which owns and invests in startups, including e-commerce websites. This year, PLDT set up a joint venture with Rocket to cultivate Internet businesses in the Philippines.

PLDT is under pressure from Globe, which is rapidly expanding its subscriber base -- particularly in urban areas. "Either we pivot or we perish," PLDT Chairman Manuel Pangilinan told a news conference in May, explaining the shift to online endeavors. 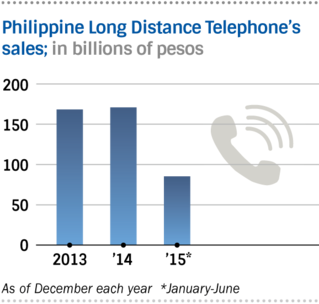 As the country's top provider of telecom services, the PLDT group counts 75 million subscribers -- over 70% of the nation's population. It hopes to leverage this base through e-commerce and digital content offerings, standing firm against Globe's advance.

PLDT announced the Fox tie-up in July, which allows subscribers to watch the U.S. company's films, TV dramas and sports coverage for 99 pesos ($2.11) per month. PLDT already had a similar partnership with Walt Disney and has decided to invest $15 million in iflix, a Malaysia-based online TV provider.

All that streaming requires plenty of bandwidth, so the Philippine company is also spending big to develop its high-speed data communications network.

The number of mobile service subscriptions in the Philippines exceeds the population. The competition between PLDT and Globe, which can be considered a duopoly, is only getting fiercer.

PLDT, which was founded as a U.S. telephone company when the Philippines was under American administration before World War II, remains the nation's most valuable enterprise. In 1998, Hong Kong conglomerate First Pacific, which is controlled by Indonesia's Salim Group, took control of its management.

Japan's NTT Group also has a 20% stake in PLDT.  Globe, meanwhile, is a joint venture of Philippine conglomerate Ayala Corp. and Singapore Telecommunications.

Globe's rapid growth in recent years has impacted PLDT's earnings. The No. 1 player's sales in the first six months of 2015 were flat on the year, at 85.2 billion pesos, while its net profit fell 6% during the period to 18.7 billion pesos.

Fitch Ratings, the major credit rating firm, has predicted that PLDT will lose market share to Globe at an annual rate of 1 percentage point.