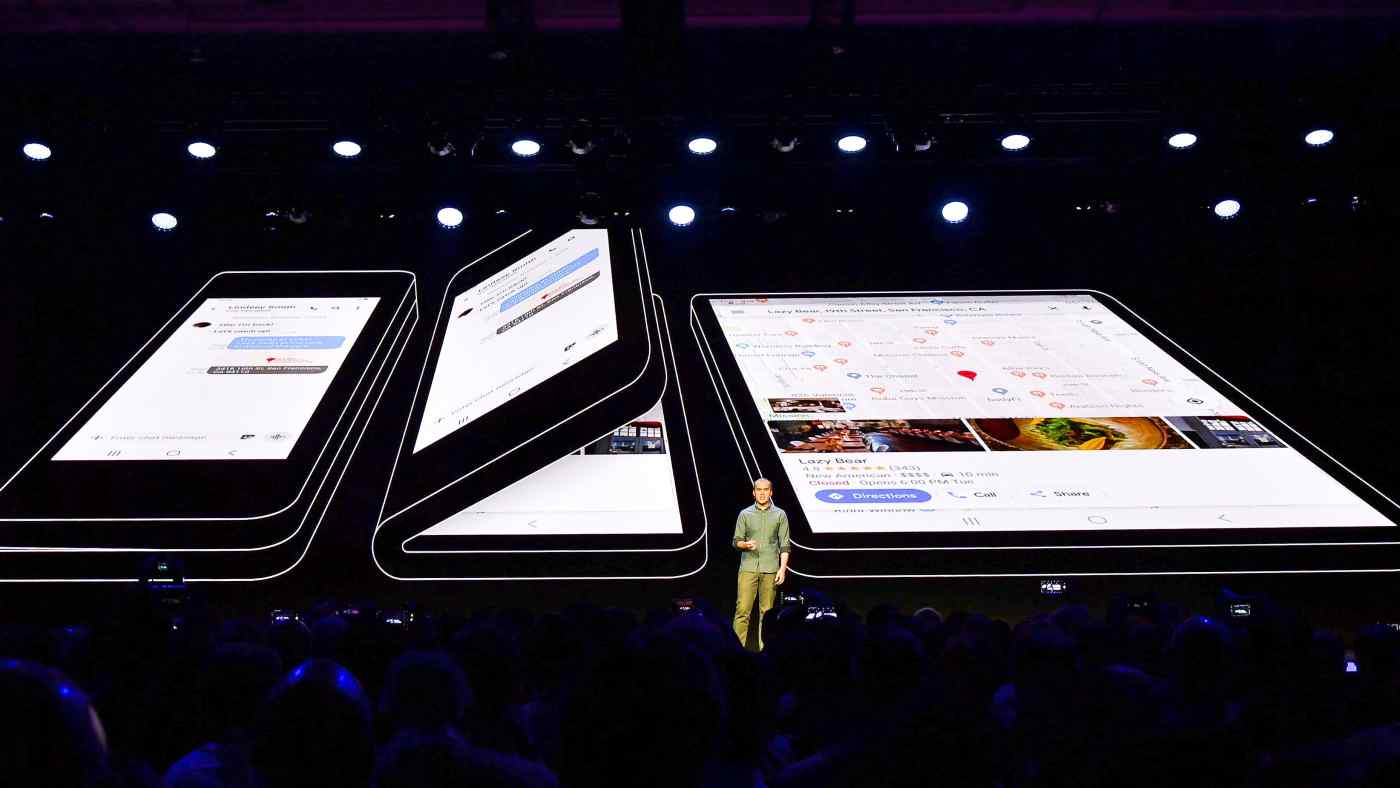 At 11 a.m. on Feb. 20, San Francisco time, Samsung is expected to unveil not only its foldable mobile, but -- in a separate handset -- the world's first smartphone compatible with next-generation 5G technology.

The launch would mark a decisive moment for the South Korean smartphone maker. Ten years after launching its Galaxy models, Samsung is hoping the innovative new phones will revive its flagging sales and halt the trend which, if unchecked, will see Chinese rival Huawei Technology overtake it as the world's biggest smartphone maker in just a few years.

Samsung's event comes four days before Huawei is likely to unveil its own foldable phone on the eve of the Mobile World Congress in Barcelona, the industry's most important event. In the coming days, a raft of other smartphone makers are also expected to unveil foldable or 5G smartphones.

Like Samsung, Huawei is counting on its foldable technology to generate a buzz. Unlike Samsung, however, Huawei's foldable will be 5G-compatible.

The different strategies of the two players say much about the culture of these arch rivals.

Samsung -- one of South Korea's oldest family conglomerates -- has deliberately chosen not to combine foldable technology with 5G in order to reduce risk. Instead, it is expected to offer 5G, which delivers significantly faster connectivity than 4G technology, in a traditional but more powerful handset, the Galaxy S10. Menawhile, the foldable phone, widely rumored to be named the Galaxy F, will be compatible with 4G networks, say executives.

By separating foldable from 5G, the company believes any teething problems with one will not affect the other. After all, market demand for foldable phones has yet to emerge, while 5G infrastructure is still not sufficiently developed worldwide.

Kim Dong-won, an analyst at KB Securities, adds that Samsung may also be concerned that equipping its foldable phone with costly 5G modem chips could erode profitability. Samsung's ad for its new phone carries the slogan, "unfolding the future", in Korean on signs above New York's Times Square. (Photo courtesy of Samsung)

But Huawei, which last year briefly overtook Apple as the world's second-largest smartphone maker, has no such qualms. The Chinese company, facing an all-out assault by the U.S. on its 5G telecom equipment business, is keen to show off its own high-tech prowess.

"This is a strong way to showcase the Chinese company's capability of advanced technology to the world," said Mia Huang, an analyst at Taipei-based research agency TrendForce. "We believe it is also a way to focus marketing resources on a handset that combines the two cutting-edge technologies."

The launch of these smartphones will set off a wave of innovation not seen in the industry for years. Many in the industry hope this will reverse the decline in global sales, which fell last year by 4.1% as consumers shunned costly upgrades in favor of cheaper or earlier-version handsets.

But given the limited 5G infrastructure, foldables will be the first real test of the industry's ability to revive consumer interest.

While details of Samsung and Huawei's foldable smartphones remain to be seen, the concept is simple: a device that unfolds into a small tablet, offering a bigger screen and more functionality. Last autumn, Samsung provided a brief glimpse of the new phone, whose display expands from 4.58 inches to 7.3 inches. The company says users can simultaneously view three windows, letting them watch movies while checking mail or performing other tasks.

"Samsung's foldable handset is likely to be priced around $2,300. I don’t think Huawei’s...price could be cheaper...taking production and materials cost into consideration."

Samsung is betting that its pioneering work in organic light-emitting diode display technology will give it an edge. Purported images of the folding phones planned by the two companies have been circulating online. If the images are accurate, Samsung will be the only company so far to offer a smartphone that folds like a book, with the screen on the inside.

Huawei's, on the other hand, may fold in the opposite direction, with the screen on the outside.

Samsung executives claim their foldable is more complex -- both mechanically and technologically -- than phones with outward-folding screens. "Ours can be folded completely, while out-folding devices [cannot]," said a Samsung source, who asked not to be named. "Out-folding screens can also be more easily scratched."

Industry watchers say Samsung has an advantage, as it has been developing and producing OLED displays for a decade. In contrast, Huawei mainly relies on its Chinese display partner, BOE Technology Group, for the flexible OLED display, which analysts say lacks Samsung's quality.

While it is still too early judge, some industry insiders predict that Samsung's foldable phone will deliver a better user experience and offer a wider range of content. In November last year, the company hosted a developers' conference in San Francisco, asking attendees to create applications suited to a foldable screen. Samsung is also in talks with game developers to release apps for the foldable design.

Finally, Samsung has partnered with Google to customize the tech giant's Android operating system so users can open multiple apps on the phone's different screens.

But Samsung is still cautious about predicting the success of its new devices. CEO Koh Dong-jin, in charge of the mobile business, said the company plans to produce 1 million foldable phone handsets in the first phase to gauge customer response.

"For a company that produces hundreds of millions handsets per year, it is very little," said an industry source asking not to be named. "It signals how Samsung careful is in dealing with this product."

Once consumer appetite is proven, Samsung plans to release a foldable smartphone with 5G capability.

Huawei, meanwhile, is counting on its 5G expertise to give it the edge. In late January, the company introduced a 5G modem chip for its latest handset as well as its own networking equipment. Huawei claims the Balong 5000 5G modem is not only the world's first single-chip, multi-mode 5G modem, but the most powerful chip for any smartphone.

Modem chips are the most important semiconductors in a device, and determine phone call quality, voice and video connectivity, and data transmission.

The Balong 5000 "can support not only the latest 5G network but also the older 4G, 3G, and 2G modes, while our competitor's [Qualcomm] most advanced modem cannot do that," said Richard Yu, CEO of Huawei's consumer business group. "At the same time, our modem's power efficacy is better and latency is lower."

Yet for all the hype of a new age of innovation, neither 5G nor foldable technology will be mainstream features in smartphones this year, analysts say. The 5G infrastructure in each market has not yet been built, while the flexible OLED required for foldable technology is still dominated by Samsung, said Huang of research agency TrendForce.

Huang forecasts that Samsung, like Huawei, will produce fewer than 1 million 5G foldable smartphones in 2019. 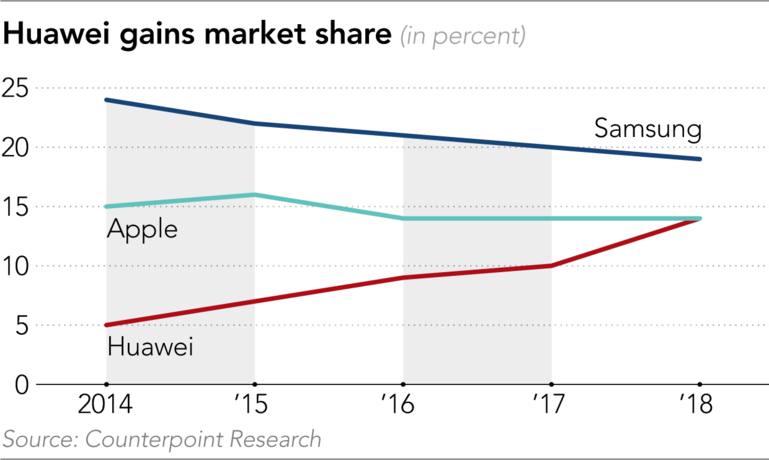 Price is another barrier. "Samsung's foldable handset is  likely to be priced around $2,300" said Jeff Pu, analyst at GF Securities. "I don’t think Huawei’s...price could be cheaper...taking production and materials cost into consideration."

Nevertheless, the fact that smaller players such as China's Xiaomi and LG Electronics of South Korea are piling into the segment suggests that most players believe that "phablets"- or phone-tablets -- are the future.

In fact, it was a Chinese startup that claimed the title for the world's first foldable phone launch. Royole, a Shenzhen-based company, beat Samsung and Huawei with the debut of its foldable smartphone in Beijing in October, one month before Samsung released its test foldable model in San Francisco.

At a price tag of about $1,300 for overseas users, Royole's FlexPai was a big draw at the global tech industry's CES jamboree in Las Vegas earlier this year, with visitors queuing at the company's booth to try their hand at bending a phone. Founded by Stanford graduate Bill Liu and two classmates seven years ago, Royole is already valued at $5 billion in its latest Series E round of funding.

"Since our technology is different from others, we will have different products at different prices with different user experiences," said Liu recently. "We are not concerned [about market competition]."

As well as challenging Samsung and Huawei on smartphones, Royole is also taking its flexible screen technology into the industrial world. It has teamed with European aerospace giant Airbus to integrate flexible displays and sensors into aircraft design.

Samsung executives were miffed when Royole stole the spotlight last October. Four months later, they are confident enough to brush off the challenge from China's newest smartphone maker. "I think it rushed to launch the foldable phone to win the world's first title," said a Samsung source, asking not to be named. "Royole's display technology is not that impressive. It may take some more time to catch up."

They are less dismissive of the challenge posed by Huawei, however. "Huawei has narrowed gap. Now it is just behind us," said another Samsung executive.