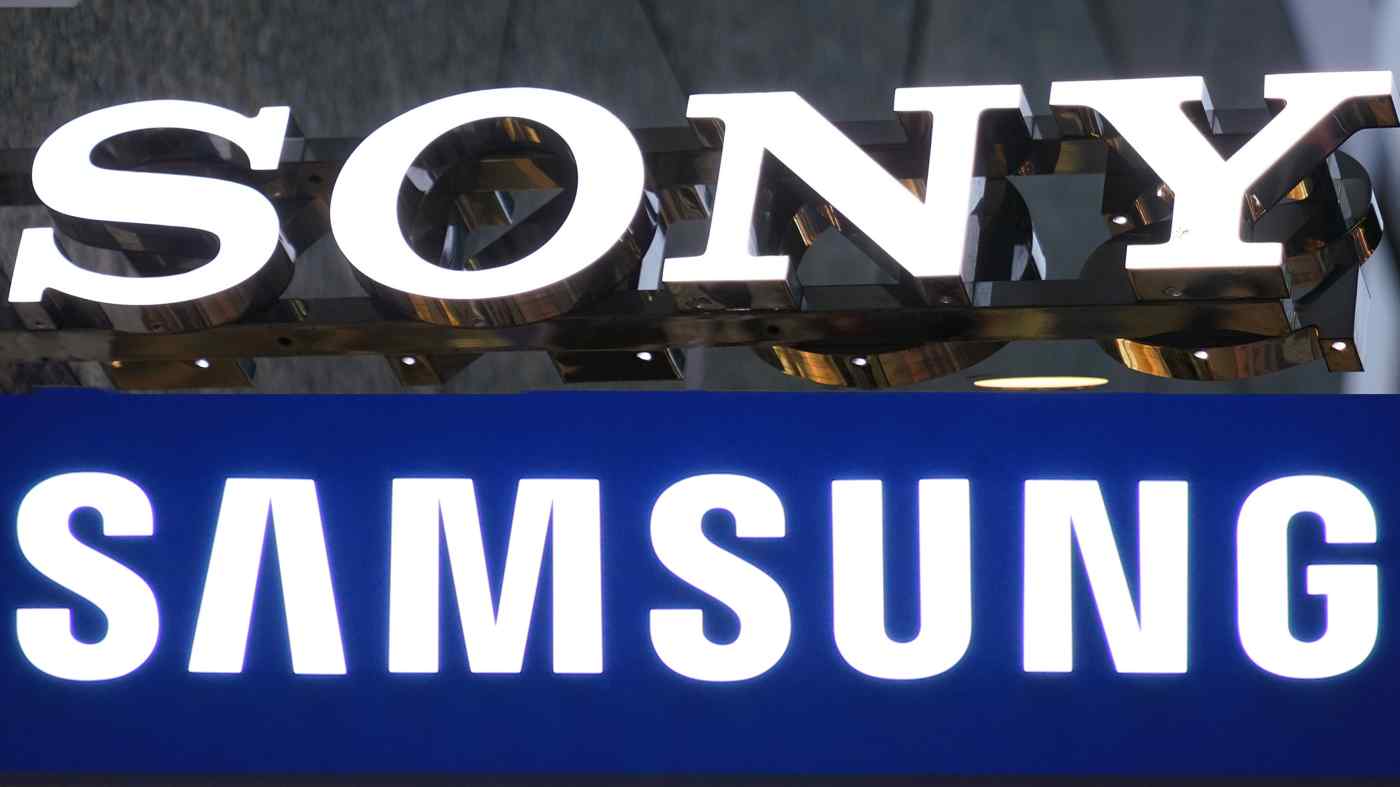 TOKYO/SEOUL -- Samsung Electronics is challenging Sony's stronghold in the global market for image sensors used in smartphones at a time when geopolitical risks involving Chinese giant Huawei Technologies are changing the competitive landscape.

Sony, which commands more than half of the market, has prioritized the supply of image sensors to Huawei and other leading smartphone manufacturers. But the strategy has backfired.

While competition for 5G smartphones is increasing, the struggles for leadership in the image sensor market are also intensifying.

"Sony maintains a cautious stance, while Samsung is going on an investment offensive as if now is their chance," said an official with a supplier of equipment used in the production process of image sensors. "The two companies are demonstrating totally different moves."

The comment followed several large orders the supplier won in August and September, all of which were from South Korea's Samsung. 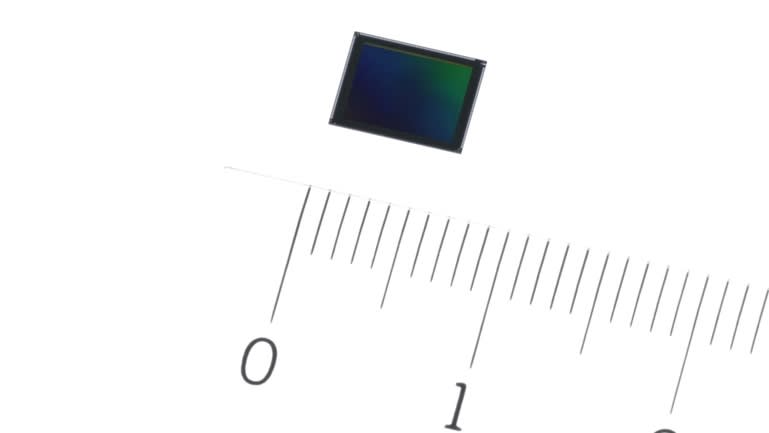 "It's not what we expected" a Sony executive said regarding new restrictions imposed by the U.S. Department of Commerce on exports to Huawei on Sept. 15.

Sony has so far been making aggressive investments in a desperate attempt to produce image sensors to keep up with brisk demand, including announcing a plan to build a new plant in Nagasaki Prefecture.

The company has been granted licenses by the U.S. government to resume some shipments to embattled Huawei. Sony, however, remains cautious about the future of its business with Huawei, a source close to the Japanese company told Nikkei, as the Chinese telecoms giant still needs to secure reliable sources for many other chips and components for its smartphone business.

Huawei is the second-biggest user of Sony-made sensors after Apple. While Sony chalked up some 1 trillion yen ($9.58 billion) in image sensor sales before the restrictions, supplies to Huawei are estimated to have accounted roughly for 20% of the total.

Sony has requested a waiver from the U.S. government that would allow it to supply the devices to Huawei. But it is uncertain whether its shipments to the Chinese telecommunication equipment maker would return to the pre-restriction level.

With its complementary metal-oxide semiconductor (CMOS) image sensors, Sony captured a 53.5% share of the global market in value terms in 2019, trailed by Samsung at 18.1%, according to British research company Omdia.

Sony developed a high-performance "laminated" image sensor ahead of rivals and has been supplying products primarily in a high price range. Seen as having technology superior to Samsung, Sony has been chosen by Apple and Huawei to supply image sensors for high-performance cameras in their smartphones.

But the Huawei problem risks upsetting the market structure. 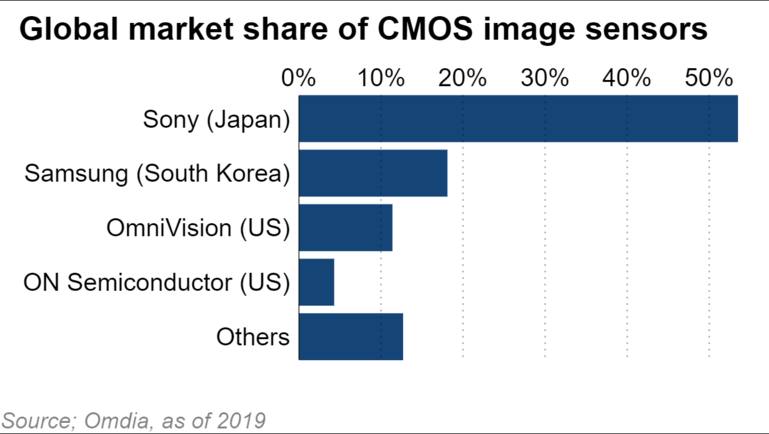 As a late comer to the image sensor market, Samsung has been doing business with Apple and Huawei on a limited scale while attracting smaller customers such as China's Xiaomi and Vivo, which are boosting smartphone production in expectation of demand for alternatives to Huawei versions.

Samsung, therefore, is highly likely to benefit from the rise of smaller Chinese smartphone makers.

Sony, for its part, has a strategy for meeting Samsung's challenge. "We will strive to expand and diversify our customer base looking ahead to fiscal 2021, " Hiroki Totoki, the company's executive deputy president, said at a press conference in October. "Recovery of profitability is expected in earnest in fiscal 2022.", he added.

But one analyst familiar with the matter said it will be difficult for Sony to "fully make up for a drop in supplies to Huawei with an increase in sales to other companies this business year."

Sony draws demand for its sensors because of their overall technological advantages such as fast-reading and low-noise performance. Having developed a 180 million pixel sensor, Samsung is emphasizing the high pixel number and use of the sensor in its own smartphones as well as Xiaomi's as a marketing strategy.

As its biggest strength, Samsung is an integrated electronics producer covering memory chips all the way to electronics manufacturing, while Sony focuses on image sensors in its semiconductor business. Samsung logs 10 times more in sales in its chip business while applying its cutting-edge production technology to image sensors. In procurement of production equipment and materials, furthermore, it enjoys the advantage of scale.

Producing electronic parts for use within its group, Samsung is also improving entire camera module quality including for image sensors.

In addition, Samsung produces high-definition organic electroluminescent panels, indispensable to smartphones, on its own and offers them in a wide price range under the Galaxy brand.

Samsung, as the biggest smartphone maker in terms of global market share in 2019, can also adjust supply and demand for image sensors and make them friendlier to users through combination with smartphones. Samsung, the world's largest smartphone maker in 2019, is stepping up marketing of its 5G smartphones.   © Reuters

The image sensor business is one of Sony's main breadwinners, posting an operating profit of 240 billion yen in fiscal 2019 that ended in March, almost the same as results in its video game segment. But announcing earnings for the second quarter of fiscal 2020 in October, Sony forecast a 66% plunge in profit for the full fiscal year for image sensors, a decline much sharper than the company's expected overall operating profit drop of 17%.

But there is a potential savior for Sony in Apple. With the release of the U.S. company's 5G-capable iPhone 12 on Oct. 23, Sony may be able to cover some losses resulting from the suspension of supplies to Huawei if the new smartphone can maintain strong demand.

For core smartphone components, major Japanese electric and electronic equipment manufacturers aggressively invested in the production of liquid crystal panels. But beaten by Chinese and South Korean rivals in terms of investment, they have lost their competitive edge.

Sony, however, has adopted a strategy to remain competitive based on its advanced image sensor technology and high market share combined with active investment.

Samsung has set a target of surpassing Sony by 2030 as the world's biggest maker of image sensors. The tug of war between Sony and Samsung over image sensors is about to gather steam at a time when the U.S. export restrictions on Huawei are starting to bring fundamental and potentially far-reaching changes to the landscape of competition in the smartphone market.

Depending on global developments, Sony may fall into a vicious circle in which it turns cautious about investment in the absence of expectation of solid demand, resulting in a loss of competitiveness. If that happens, Sony may see its long-held stronghold crumble.