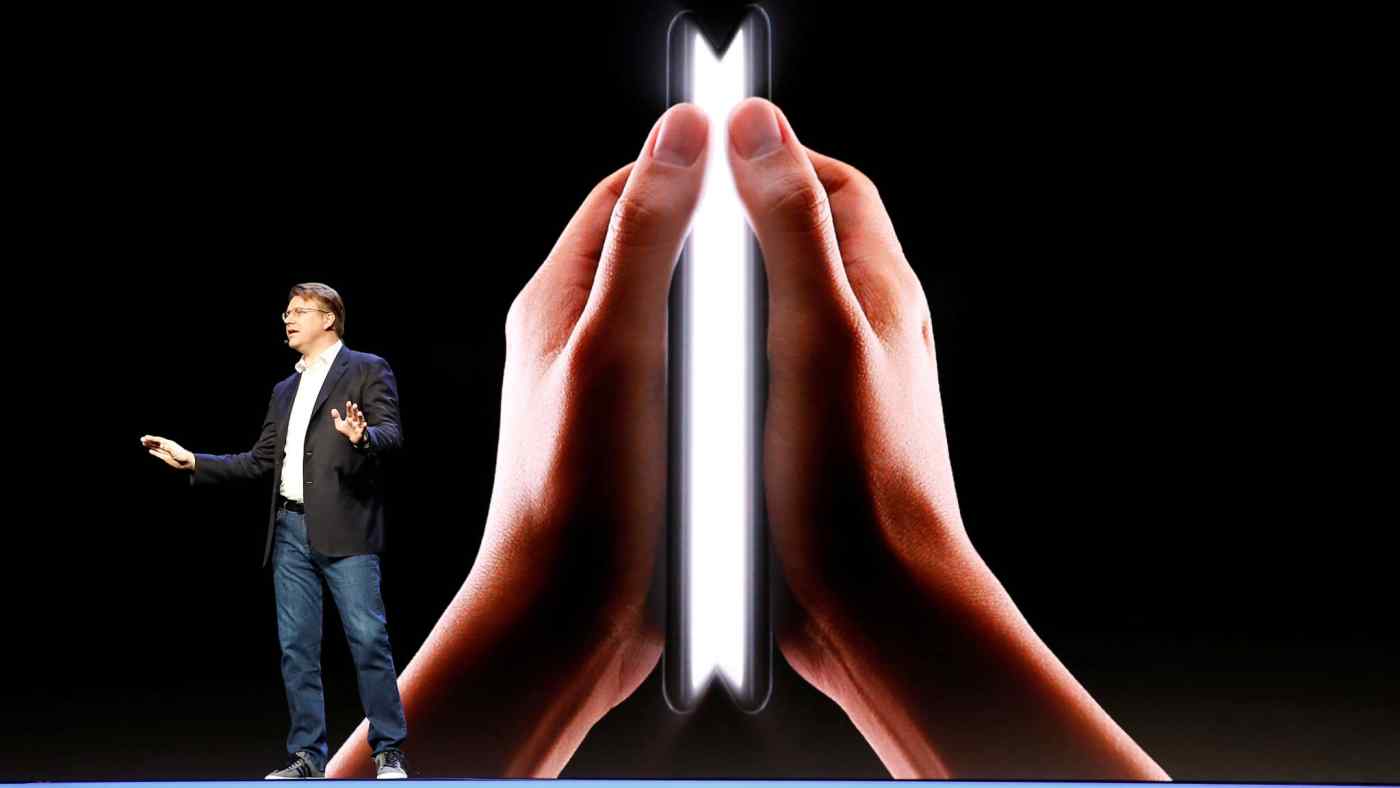 SAN FRANCISCO -- Samsung Electronics will start mass production of its anticipated foldable phone in the coming months, the company said on Nov. 7, adding that the new device will be able to run three apps at the same time on its 7.3-inch screen.

The world's top smartphone maker by market share had been racing big Chinese rival Huawei Technologies to produce the first foldable phone, only to be beaten this month by a small startup. Samsung has nearly completed hardware development for the device, from a flexible display to lightweight battery.

"We will come together at a key turning point in our industry," Samsung CEO Koh Dong-jin said at the South Korean company's developers conference in San Francisco. "A new generation of technology breakthroughs is opening the door to a phase we have never seen before."

Koh confirmed that Samsung is developing a specialized operating system for the foldable phone with Google, whose Android is the world's most widely used mobile operating system.

He said that the new device will allow users to open multiple windows, letting them check emails and chat with friends at the same time on the bigger unfolded screen. Samsung held back many details regarding the "Infinity Flex" foldable display, including the camera and battery devices would use, as well as their price.   © Reuters

At the San Francisco conference, Samsung hoped to enthuse developers who can offer optimized apps to enrich the uses and content for the phone.

But the company held back many details on the bendable phone, including the camera and battery as well as the price, with a source saying the company remains concerned that it lacks enough software content to make the new device a commercial success.

"Samsung is worried about how it can make the foldable phone valuable enough to satisfy consumers who pay big money," said a source close to the company who requested anonymity. The phone is expected to be priced between $1,500 and $2,000. "Samsung is afraid that it will be ridiculed in the market if it fails to draw enough customers."

"The device has to hit the market with an OS and apps that work on the larger screen," Milanesi said. "That is no trivial process and needs time."

Given the phone's likely high price, she added, releasing it "without having all the pieces would make it a gimmick rather than the future of smartphones."

The company had hoped to be the first to launch a foldable phone, a product that many in the industry expect will transform how the devices are used, potentially replacing tablets or laptops.

Samsung aims to produce a higher-end model as Huawei gains rapidly on the industry leader. Both companies hope to release foldable phones next year, with the winner well placed to secure the lead in a technology that could open new revenue streams.

Apple is applying for design patents for a foldable phone. But the Silicon Valley company has decided to be a follower in order to reduce risks, according to a source familiar with the matter.

"Apple is watching carefully what Samsung is doing with the new phone. It will release its own product later after checking reactions from the market."

The new device might give a much-needed boost to a sluggish global smartphone market, which totals nearly 1.5 billion units annually. Counterpoint Technology Market Research forecast a 1.3% decrease in smartphone shipments for 2018.

"Many markets have already hit the saturation point for new smartphone demand and are dependent on replacement demand," said Tom Kang, a researcher director at Counterpoint.

While many of the details of Samsung's foldable phone remain secret, Royole's device is being closely watched for clues to its impact on a sluggish smartphone market.

When unfolded, the FlexPai's 7.8-inch display is the size of a compact tablet, creating a bigger screen for playing games and watching videos. When the user wants to carry the device around or make a call, FlexPai can fold in half to normal smartphone size. Royole says the screen can be bent more than 200,000 times.

Samsung downplayed Royole's product. "Everybody knows that we have the top display technology. We do not care about the company that much," said a Samsung executive, asking not to be named.