South Korean giant pins hopes on the $1,980 Galaxy Fold, due out in April

SAN FRANCISCO -- Samsung Electronics unveiled Wednesday a foldable smartphone and the world's first commercially available 5G phone, officially setting off the race among smartphone makers for breakthroughs as they seek to shore up consumer interest amid a plateauing market.

On the foldable-display front, Chinese-founded startup Royole beat the South Korean giant to market when it began taking orders for the FlexPai last October.

Still, Samsung is the first mainstream smartphone maker to bring a foldable smart mobile device to consumers after first teasing a prototype at its developers' conference in November.

The Galaxy Fold has a 7.3-inch screen -- the size of a minitablet -- and folds into a smaller form with a 4.6-inch cover display. It supports app continuity between screens, meaning no disruption when folding or unfolding. The Fold can show three apps simultaneously on a single screen when expanded.

Koh Dong-jin, CEO of Samsung's mobile division, said the Fold "breaks new ground because it answers skeptics who say everything possible has been done, that the era of smartphone innovation is over, and the smartphone is a mature technology in a saturated market."

"We are here to prove them wrong," Koh said.

But for Samsung's main consumer base, the center of the launch is still the S10, said Carolina Milanesi, an analyst at Creative Strategies.

"The foldable phone is a very niche product," Milanesi said.

"They're trying to show where the market is going but also realize that not every consumer is ready for it yet," she said.

The Galaxy S10 series, comprising the S10, S10+, S10e and S10 5G, marks the 10th anniversary of Samsung's Galaxy smartphone line. The devices all boast Samsung's Infinity Display -- with small bezels and curved edges -- and an ultrasonic fingerprint scanner embedded in the screen.

The phones all support wireless charging between devices. 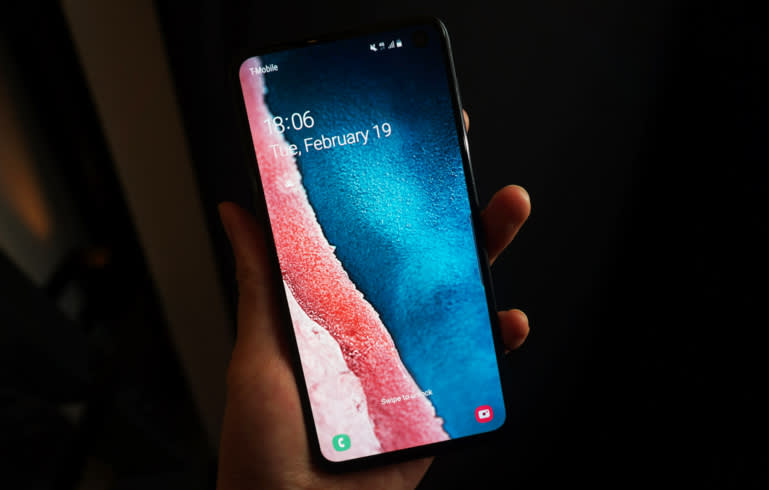 The Samsung Galaxy S10 has an ultrasonic fingerprint scanner embedded in the screen. (Photo by Alex Fang)

Smartphone makers like Samsung are racing to showcase these new technologies at a time when the global smartphone market shows signs of fatigue as consumers hesitate to spend hundreds of dollars on a simple upgrade to higher specifications.

Smartphone shipments worldwide fell 5% by volume in 2018 to mark the first-ever decline on a full-year basis, according to Boston-based market research company Strategy Analytics. Although Samsung maintained its top spot globally last year, with a 20.4% market share, its shipments declined 8.3% from 2017 and its share shrank 0.7 percentage point. Huawei's market share rose to 14.4% in 2018 from 10.1%.

"Huawei is well-positioned to capture the 5G market as it has its own equipment business -- though now there are some political headwinds," said Linda Sui, an analyst at Strategy Analytics. "But in the flexible-display area, I think Samsung is No. 1."

Sui said Samsung's foldable phone might not immediately translate into revenue growth this year, citing a small market volume. Nonetheless, she saw its launch was an exciting event for both the company and the smartphone industry, one that will benefit Samsung in the long run.

Samsung suffered year-on-year drops of 10% for sales and 30% for net profit in the fourth quarter of 2018, earnings results out last month show. Consumer reaction to the new offerings will be crucial for the company if it wants to fend off the competition and bolster sagging sales.

"On a scale of 1 to 10, the importance of this launch goes to 11," said Ramon Llamas, an analyst with market intelligence company IDC. Samsung will have an edge over Huawei in North America because of the backlash against the Chinese giant, Llamas said.