Korean Air Lines pilots and members of the public go incognito in a march against abuse of power by the chairman's family in May 2018.   © Reuters
KENICHI YAMADA, Nikkei staff writerMarch 6, 2019 05:04 JST | South Korea
CopyCopied

SEOUL -- Hanjin Group, one of South Korea's vast conglomerates, hopes to quiet a public outcry over a spate of scandals involving members of its founding family and escape the pressure from an activist fund that rumors say has ties to the current government.

In an unusual move for a chaebol, as the conglomerates are known, the group has compiled a five-year management plan that, among other things, calls for boosting annual sales by more than 30%. The group has also unveiled plans to cut debt at Korean Air Lines and increase the number of outside board members at its holding company.

The impetus behind these plans is pressure from a domestic activist fund called Korea Corporate Governance Improvement. The pressure began after Cho Yang-ho, the conglomerate's chief, was indicted without arrest on embezzlement and other charges.

In January, KCGI called on Hanjin Group to pull the plug on unprofitable businesses and push ahead with management reforms.

KCGI was established in July 2018 by its representative, Kang Sung-bu, who had worked for many South Korean securities companies. It claims to have invested more than 160 billion won ($142 million), but the sources of the private equity fund's capital are unclear.

One theory holds that the money came from financial institutions looking for quick profits. There are also rumors that South Korea's current administration, which has been advocating for chaebol reforms, is involved behind the scenes.

Regardless, the annual shareholders meetings of Hanjin Group companies are coming up this month, and the conglomerate is now desperate to gain its stock owners' understanding.

The plan also calls for boosting the carrier's operating profit about 2.5-fold during the same period to 1.7 trillion won in 2023.

Many companies in Japan and elsewhere compile management plans that cover three to five years, but it is rare for a South Korean company to set medium-term targets.

Hanjin KAL holds about 30% of Korean Air Lines. The National Pension Service, South Korea's public pension fund, owns a little over 10%, and individual and other minor shareholders own a combined 56%.

KAL's medium-term management plan and growth targets apparently reflect a desire to secure a mandate from the smaller shareholders.

Hanjin KAL unveiled a five-year management plan in mid-February that calls for boosting overall group sales by more than 30%, to 22 trillion won or more in 2023, compared to 2018 levels.

The plan also calls for raising the operating profit margin at the group by about 4 percentage points during the same period to 10% in 2023.

In addition, Hanjin KAL's management plan calls for new investments at and expanded sales networks for the group's airline, hotel and logistics businesses.

Furthermore, Hanjin KAL is to increase the number of outside directors from three to four, which will mean these directors will have a majority. And Korean Air plans to lower its debt-to-equity ratio to 395% in 2023 from 699% in 2018.

The ratio has become a target for criticism from shareholders; it is much higher than the 100% to 200% range that major Japanese and Hong Kong airlines find themselves in. 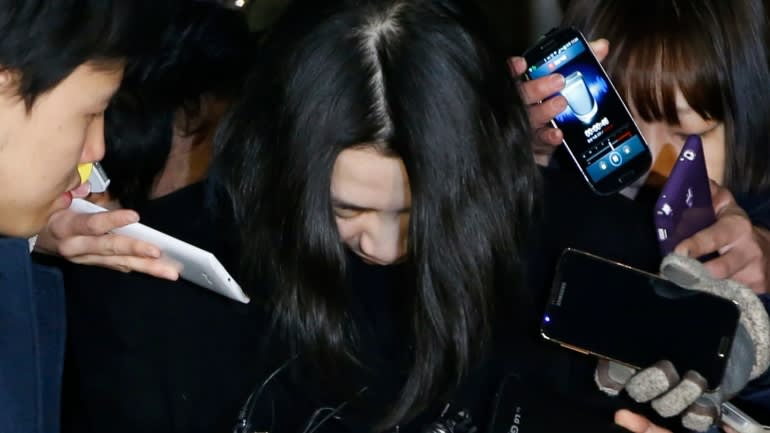 While a Korean Air Lines executive in 2014, Cho Hyun-ah became enraged and delayed a flight because of how she was served nuts in first class. Five years later and her family remains embroiled in scandals.   © Reuters

Hanjin Group's founding family, meanwhile, has been scandal-plagued. Group Chairman Cho was indicted by prosecutors in October on embezzlement and breach of trust charges. His three children, including his eldest daughter, Cho Hyun-ah, stepped into their own scandals during the same year.

South Korean people have traditionally been critical of the country's family-run chaebol. But the Cho family has come under increased public scrutiny as it goes from scandal to scandal.

Hanjin Group employees held a protest rally calling for Chairman Cho's resignation. South Korean media outlets have repeatedly reported that the focus of Hanjin Group companies' upcoming shareholders meetings will be whether Cho is reappointed as a board member.

After acquiring a stake of about 11% in Hanjin KAL, KCGI began negotiating with Hanjin Group behind the scenes. In January, after those talks broke down, the private equity fund is said to have demanded management reforms at the conglomerate.

U.S. investment company Elliott Management once clashed with Samsung Group and later set its sights on Hyundai Motor. In fact, overseas institutional investors have often called on chaebol to carry out management reforms. But this is believed to be the first time that a domestic fund has publicly locked horns with one of the South Korean economy's dominant players.

Hanjin Group is not remaining on the defensive. On Feb. 20, it claimed that KCGI is not legally qualified to exercise its shareholder proposal rights because KCGI's large shareholding report was publicly confirmed only in November. KCGI insists that it is fully qualified.