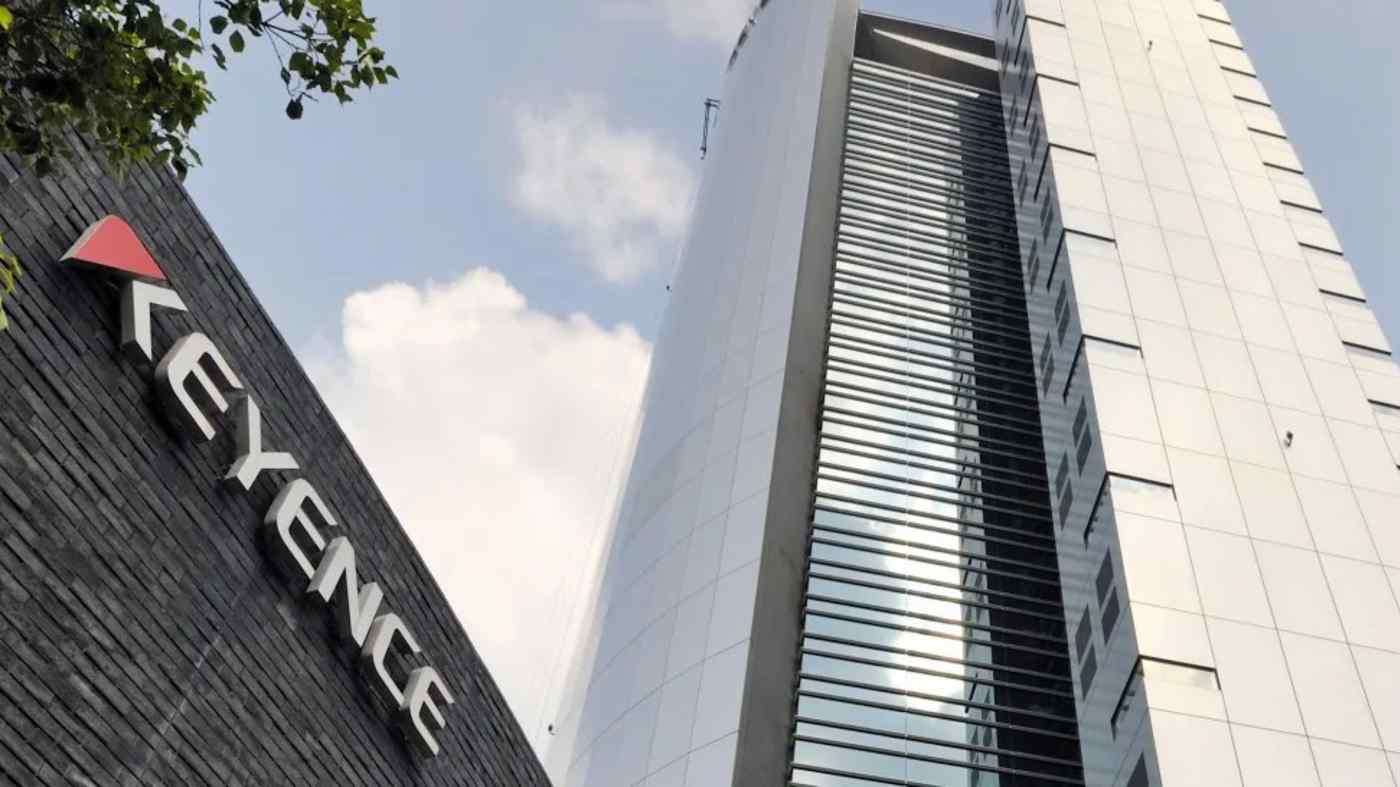 OSAKA -- Sensor manufacturer Keyence has reported an operating profit margin of 54%, breaking its own record for the seventh straight year even as it pays workers more than triple the average annual salary found at listed domestic companies.

The Japanese company's high-octane performance is driven by rigorous use of data that refines the development and sales of products, and keeps employees under heavy scrutiny.

Sales managers are constantly ranked within the company for all to see. Those who remain below a certain threshold must explain themselves in private sit-downs with their superiors.

"There are GPS tracking devices on company vehicles, and I was questioned by my boss when my arrival was off by 10 minutes from the appointed time," said a sales manager working outside of Tokyo.

At first glance, Keyence displays all the trappings of the workaholic culture that has defined corporate Japan. But instead of relying solely on personal sacrifice and grueling work, the company draws success from its data.

Keyence recently reported consolidated operating profit of 317.87 billion yen ($2.85 billion) for the year ended in March, nearly double the 163.2 billion yen earned at Fanuc and well above the 76.6 billion yen at Omron, another domestic rival. 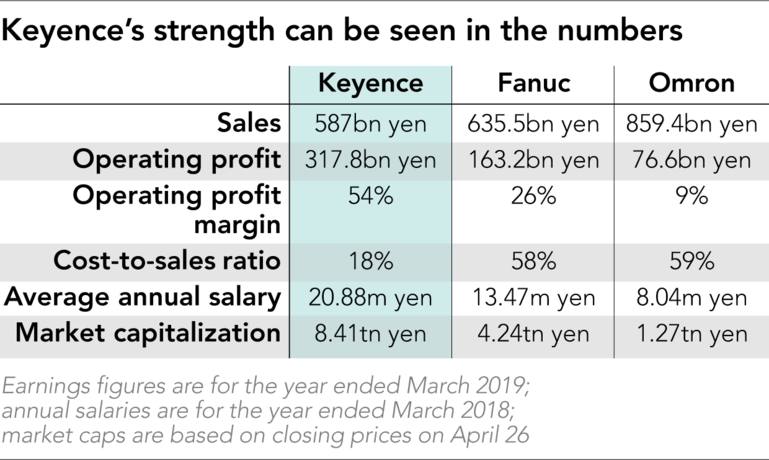 Keyence's products range from pressure sensors to measuring devices and high-resolution microscopes. The company possesses little proprietary technology that sets it apart, yet its 54% operating profit margin outstrips the 26% realized by Fanuc and 9% at Omron. Keyence limited the cost-to-sales ratio to 18%, compared with nearly 60% for its two rivals.

The secret to such efficiency lies in how Keyence packages its products.

"If you sell just the device, you may get 10 million yen per contract, but if the device is bundled as a system, it will fetch tens of millions of yen," the sales manager said.

That high-margin approach requires the expertise to select the right device and software from Keyence's vast catalog to build a system matching a client's needs. It also requires volumes of customer data that come only from years of legwork. Furthermore, the company updates its sales and product development strategies based on decades' worth of information from sales leads and client companies.

Keyence also tracks how many phone calls to clients in a week lead to business negotiations. The data is differentiated by product segment, and the practice minimizes wasted effort. The company never engages in unsolicited sales visits to potential clients.

Data drives product development as well. Developers receive "needs cards" monthly created by sales teams around the world based on frequent visits to the factory floors of clients. For example, a card might say a customer wants a camera that can detect flaws in plastic bottles or to halve the size of a piece of equipment.

In turn, the developers concoct factory automation functions unavailable anywhere else. This has won fans among corporate clients.

"While other companies would simply explain [products] based on their catalogs, only Keyence would come forward with proposals that are attuned to our needs," said a representative at a Chinese enterprise.

Yet members of sales teams rarely meet face to face with developers. Details on new products usually are presented through documents. Instead of attending company meetings, sales managers are out looking to sell as many of the new products before competitors devise similar offerings.

The complete separation of the sales and development teams lends to "new products being continuously created at high-speed cycles," said a Keyence employee working at the Osaka head office.

The product cycle has its roots in Keyence's fabless manufacturing, which dates all the way to its founding in 1974. The company handles product planning and development while contract manufacturers fabricate the final item, and transactions are settled in cash.

The contractors deliver most of their output to Keyence, letting the company control its procurement costs and product quality, another Keyence sales manager said.

If problems occur with any Keyence device, the company sends replacement parts the same day. That requires Keyence to oversee a massive inventory, but "most of our clients place heavy importance on the speed of delivery during emergencies," a sales agent said. "They don't care if Keyence devices are a little expensive."

Overseas sales rose 11% during the previous fiscal year, accounting for 53% of the company's total. While some factory automation companies are struggling in China, Keyence secured growth in both profit and revenue in that market by leaning on its direct sales team to aggressively land small orders.

"About 80% of Keyence's foreign sales contacts are believed to be local companies, so competition is limited," said Tomoki Komiya, senior analyst at Mitsubishi UFJ Morgan Stanley Securities. Small to midsize Chinese enterprises are only starting to automate their processes, which leaves much room for growth in sensor sales.

Keyence's market capitalization has soared roughly ninefold to around 8.4 trillion yen over the past decade, putting it in fourth place nationally ahead of Sony.

However, not everything is rosy in Keyence's securities filings.

The mean age of employees is 35.9 years, and they stay with the company an average of 12.2 years -- about five years less than at Omron. Though an increase in hiring to drive its overseas expansion could explain some of these outcomes, turnover at Keyence appears abnormally high despite the lavish compensation. A former sales representative said that although few people quit in the development segment, a relatively large number of sales personnel leave the company.

The staff at Keyence are under pressure to maintain a constantly speedy product cycle.

"If we don't continuously produce singularly unique products, we will immediately fall into price competition," the head office employee said.