The scene at the gates on Dec. 3 shows what a difference half a year makes.
DAISUKE HARASHIMA, Nikkei staff writerDecember 14, 2016 19:35 JST | China
CopyCopied

SHANGHAI -- Half a year after its much-hyped debut, Shanghai Disneyland is struggling to keep the turnstiles spinning as visitors' complaints about high prices and disappointing services have spread through social networking sites.

A clear day in early December reveals a lethargy that contrasts with the fever seen during the park's June 16 opening. Entry lines at the core property of Shanghai Disney Resort are almost nonexistent at 9 a.m. as gates open. In the afternoon, electronic signboards show only a short wait -- five to 50 minutes -- for all but the most popular attractions. Workers kill time chatting at deserted gift shops across the park.

Many of those who made the trip carried in packed lunches and drinks from nearby convenience stores, including thriving locations inside the subway station used by Disneyland visitors. Come lunchtime, patrons spread out on benches to eat.

"I heard everything in the park was expensive, so I bought lunch ahead of time," a college student from Jiangxi Province said, adding that she did not plan to pick up souvenirs or gifts. 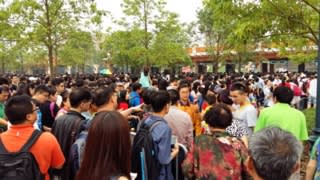 Shanghai Disneyland drew 4 million visitors in its first four months, and the park is on track to reach its initial-year target of 10 million visitors. But business is less brisk than expected, said an official for the city of Shanghai, which holds a majority stake in the park's operator.

A team from The Nikkei asked 20 visitors in late November and early December about Shanghai Disneyland's highs and lows. Of that group, 45% praised the attractions, while 40% said they appreciated the park's atmosphere. One in five spoke of convenient transportation to the park. The state-of-the-art computer graphics in various attractions, as well as the venue's appeal to both adults and children, drew particular praise.

"When the lights turn on at night, it's almost like a fairy tale," said a 22-year-old woman visiting from Beijing. She called the Shanghai park "a clear winner" over its siblings in Hong Kong and Paris. A 36-year-old Shanghai man with his family in tow said the venue is "very convenient" to reach, with a parking lot nearby.

But high prices are the most common complaint among the visitors. Admission runs 370 yuan ($53.50) on weekdays and 499 yuan on weekends and holidays -- a sizable figure given the average monthly wage is just under 6,000 yuan even in Shanghai, where people tend to earn more than in other areas. Tokyo Disneyland, by comparison, charges 7,400 yen ($64.30) for a day's admission.

A 26-year-old Dalian woman visiting with friends said she spent over 2,000 yuan, or half a month's wages, on the two-day trip, including lodging and airfare. The group initially intended to stay at a "Toy Story"-themed hotel run by Disney, she said, but the 1,000-yuan nightly rate led them to opt for a youth hostel nearby instead. Poor transportation in the area still left the travelers shelling out for pricey private cars to and from the park.

"Food or merchandise in the park costs 100 yuan or so -- it's pretty expensive," the visitor said. The woman even passed up bottled water and made do with a small 30-yuan hot dog although she was hungry. To "enjoy the atmosphere," she visited a gift shop, but all she did was don a hat topped with "Mickey Mouse" ears and take photos.

Shaun Rein, founder and managing director of China Market Research Group, said visitors complain most about the cost of food and souvenirs rather than ticket prices. Chinese consumers tend to hesitate on these types of costs, he said, adding, "I would actually raise ticket prices and lower prices for food."

Poor service and operations were also an issue for 40% of respondents. A 30-year-old woman from Suzhou visiting with five other family members complained of staff doing nothing about line-jumpers, as well as the "coarse" manner of speech by workers. Given how close they are to Shanghai, the family members would like to keep coming, she said, but they will not return unless park operations change.

"There are plenty of staff around, but they can't even give clear directions," a college student from Hangzhou said, having asked two separate workers for navigational help to no avail.

China's baseline for customer service tends to be considerably lower than in advanced nations -- something residents are resigned to, even if they are not happy. But the involvement of Disney, a lauded global entertainment company, pushed expectations for Shanghai Disneyland much higher than for elsewhere in this country, deepening frustrations when those hopes are not met. These dashed expectations are damaging the park's image.

Two in five of those surveyed by The Nikkei said they expected the park to be more crowded than it was. Disney faced substantial opening-day issues in Shanghai, Rein said, as the park was "too packed, and so they had people waiting in line for three hours for one ride." Pictures of these long lines and complaints from those waiting flew across Chinese social media, giving the park a reputation that will take a good deal of time to counter.

A high number of repeat visitors is key to a theme park's success. Shanghai Disneyland has begun offering 100-yuan gift certificates, usable at facilities such as restaurants inside the park, to get potential customers in the door. It has also started selling season passes through March 2017. These passes are invalid during the Lunar New Year holiday, though the ones applicable on weekdays only are relatively cheap, paying off after just three trips to the park.

Expansions in progress could burnish the venue's appeal. But large-scale renovations are also in store for Disney parks in Tokyo and Hong Kong, creating competition for visitors. If Shanghai Disneyland cannot solve its customer service problem, cultivating repeat customers will remain challenging, limiting growth in admissions.

Hong Kong Disneyland suffered its first net loss in four years in fiscal 2015, amid a drop in the number of Chinese visitors, who account for roughly 40% of admissions. Market cannibalization by the Shanghai facility likely contributed to this drop. Disney has its work cut out to keep both theme parks humming happy tunes.