OSAKA -- It has been nine months since Sharp was acquired by Hon Hai Precision Industry, a Taiwanese contract manufacturer. Thanks to the strong leadership of President Tai Jeng-wu, who came over from the parent company, Sharp is starting to recover.

Sharp's medium-term business plan through March 2020, released on May 26, sets the rather ambitious goal of expanding group sales by more than 1 trillion yen ($9 billion). It also expects operating profit to reach a near-record level. But given Hon Hai's top-down management style, concerns are growing that employees could become intimidated.

If Sharp were to lose its creative edge, a full-scale recovery could take much longer than indicated by the current trajectory.

During a news conference at Sharp's head office in the city of Sakai, Osaka Prefecture, Tai said the company will achieve a major turnaround by shifting from structural reform to business expansion.

Tai, who often speaks of the importance of being faithful to one's own word, achieves goals one by one. He says he sets them high in the hope of boosting employee morale.

Even though earnings are turning up, Tai continues to heap pressure on his high-ranking lieutenants. Many in the company can not even breathe a sigh of relief. 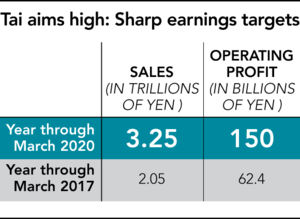 During the news conference, Tai said his biggest concern is that employee awareness might decrease. He also said he wanted employees to think outside the box when it comes to tackling costs. This can be achieved, he said, by setting more challenging goals.

These messages were sent out to employees right after Japan's Golden Week holidays, which ended in early May, to keep the workers on their toes.

This was expeditious, to say the least. Hon Hai Chairman Terry Gou, after all, gave Sharp two years to achieve a net profit.

After he took the helm last August, Tai said he is not immune to anxiety, then added that no one can develop their talent unless they are under pressure.

He applies his cost-cutting mandate to himself. He lives in a company house in the city of Osaka near Sharp's old head office. He also uses bullet trains rather than more expensive airplanes when he travels on business.

Tai also revised onerous contracts with suppliers that had been keeping Sharp's solar cell business in the red. The unit has since become profitable. In instances like these, Tai has been able to demonstrate the hard-edged negotiating skills he acquired while serving as Hon Hai's No. 2 executive.

Tai's deep understanding of businesses and factory floors are also helping improve Sharp's bottom line. He attaches great importance on the actual making of products -- an ethic he picked up while working on the production end of business. His decision to consolidate the operations of the Mihara factory with those of the Fukuyama factory, both located in Hiroshima Prefecture, was made possible because he had familiarized himself with the utilization rates and other details of each plant.

Tai has suggested he would step down as president when Sharp posts a net profit and is ready to again be listed on the first section of the Tokyo Stock Exchange. But financial institutions that do business with Sharp have already been leaning on him not to resign.

That said, as Tai's power increases, Sharp employees are becoming more passive, at least in some cases. In April, a meeting went on for about a week at the head office so executives could review the company's businesses. Division heads explained their medium-term plans, many of which failed to pass muster with Tai. Not only did Tai deem sales and revenue goals to be too low, he even commented on the way documents had been prepared and presentations made. More than half the division heads were instructed to rework their plans.

At first glance, Tai looks mild-mannered, but he shows no mercy, even to elderly executives. "Once Mr. Tai says, 'no,' it is difficult to get his approval," a midcareer employee said. "And the tacit understanding is that it is no use to try to reason with him."

Hon Hai, better known as Foxconn, is steadily strengthening its control over Sharp. A board reshuffle was unveiled on May 12. Of the nine directors, five hail from Foxconn group companies. The current board has three directors who have been with Sharp since the start of their career. Of them, one is to remain on the reshuffled board -- Katsuaki Nomura, executive vise president.

Foxconn Chairman Terry Gou has a deep trust in Nomura, partly because he was transferred to an LCD panel production company, a joint venture set up by Hon Hai and Sharp. The other two directors who have only known Sharp, Yoshisuke Hasegawa and Masahiro Okitsu, are to step down.

Hasegawa has been overseeing Sharp's internet of things projects, for which Tai has high expectations. Okitsu has been responsible for white goods and is expected to lead the expansion of sales in Asia.

Sharp explained that the reshuffle is aimed at separating the duties of those who oversee operations and those who execute them.

Hasegawa, Okitsu and many others who have worked only for Sharp will attend management meetings -- at which company policies are set -- as executive officers.

But some in the company remain skeptical. "There has been no explanation about the aim behind the personnel changes," a Sharp employee said. "The top executives may not want to include people from Sharp in the [board] meetings where the high-level decision-making is done."

When the acquisition agreement was first made, Gou stressed that Sharp would remain independent. What is going on now seems to contradict this.

"There will be no one who can talk straight with Gou or Tai," said another Sharp employee.

Meanwhile, the appointment of Nobuaki Kurumatani as a new board member stunned many people inside and outside the company. Kurumatani is a powerful banker who served as a deputy president of Sumitomo Mitsui banking -- a competitor to Sharp's main banks, Mizuho Bank and Bank of Tokyo-Mitsubishi UFJ. Tai handpicked him, using his own political and financial connections. 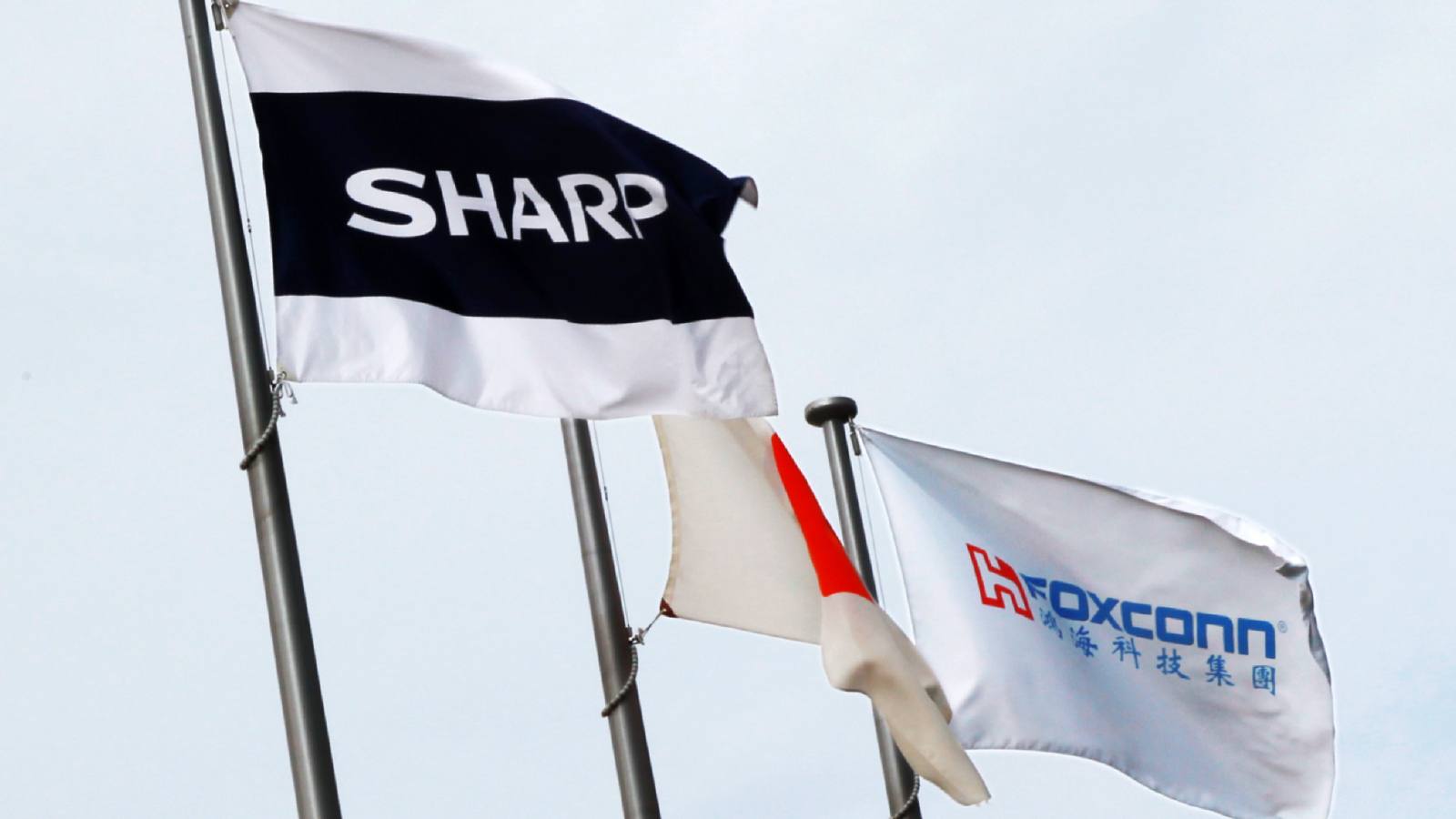 Google and Sharp team up on LCDs for virtual reality

Sharp to open panel factory in US

According to a senior official of a bank, Foxconn is taking Sharp in the right direction, and the appointment of a board member from a rival bank shows how the Japanese company has changed since the days when it had to heavily lean on its main banks to keep operating.

Not many who spoke up

This is not to say that executives clearly know what Tai is thinking. "I know he has been to the U.S. but do not know the nature of his trip," Nomura said after earnings were announced on April 28. The day before, Tai and Gou had visited the White House. They were believed to have met U.S. President Donald Trump and directly asked him to provide support for the building of an LCD panel factory.

The plan to build an LCD panel factory in the U.S., announced by Tai in January, was news to Sharp executives. A month earlier, Sharp and Foxconn had decided to spend about 1 trillion yen on a factory in Guangzhou, in the southern Chinese province of Guangdong, that would make LCD panels for TVs. The planned U.S. factory is expected cost about 800 billion yen. Many people are skeptical about whether these factories will be able to contribute to Sharp profits, although Sharp's investment in each is to be limited.

A Sharp executive said he is unsure whether Sharp should be involved in projects such as bidding for chipmaker Toshiba Memory, a decision that was made with Foxconn, as well as collaborating with Masayoshi Son, the chairman and CEO of SoftBank Group and a friend of Gou, as Son wields his new 10 trillion yen investment fund.

Gou and Tai, it seems, have gone behind closed doors to make decisions on one critical matter after another, giving other executives little chance to object.

Going forward, the creativity and ideas of every employee will be crucial in accelerating Sharp's growth -- something Tai has reiterated on many occasions. If the company lacks an atmosphere that encourages lively discussions undaunted by top leaders, developing products unique to Sharp will prove difficult.

"There were not many people in Sharp who spoke up to top executives," one influential former employee said. "This could become a major problem if the atmosphere returns."

Katsuhiko Machida, who became Sharp president in 1998, launched a strategy to completely shift to LCD-panel TVs from cathode-ray-tube sets. It was a huge success. Temporarily.

Sharp will become a truly global company that can be counted on to expand.

His successor, Mikio Katayama, who assumed the presidency at the age of 49 in 2007, once said, "I know more about LCDs than anybody else."

These former presidents demonstrated powerful leadership. They both contributed greatly to making Sharp a global company, but a top-down corporate culture also took root under their leadership. No one was able to prevent the top leaders' ambitious plans from going too far. As a result, the company kept making massive investments in LCD panels and solar cells.

These investments put Sharp in the financial hole that Foxconn pulled it out of.

The introduction of Foxconn's corporate culture will likely help Sharp develop people who can actively make business proposals. At least, that is what some Sharp people thought shortly after the company came under Foxconn's wing. But now Sharp is becoming more passive in Foxconn's strong top-down culture. "Recently, Sharp seems to have gone back to the Machida-Katayama era," a Sharp employee said.

On May 26, Tai stressed that Sharp would become a truly global company that can be counted on to expand. If this ideal is to be realized, it is important for Sharp to create a bottom-up culture in which employees feel that they can freely share their opinions.