TOKYO -- Nikon officially announced on Oct. 30 plans to close a digital camera plant in Wuxi, China as part of its structural reform program running through fiscal 2018, which prioritizes profitability over expansion.

"We regretfully halt operations today. Our operating rates are falling," the plant chief's voice echoed through the factory speakers. The roughly 2,300 employees of the plant, located in Jiangsu Province, listened calmly.

In the past, Japanese companies have faced riots and protests from employees when trying to close factories. Nikon was bracing for just such a backlash, but even the employees were well aware of falling digital camera sales.

Until about six years ago, the plant employed some 8,000 workers and produced more than five times the current output.

The announcement comes as smartphones are increasingly eroding market share for compact digital cameras. On Oct.30, the same day of the plant closure, Nikon raised its earnings forecast for the April-September period in 2017, primarily due to reduced sales expenses and more efficient research and development sparked by the reforms.

The profit-oriented strategy has put Nikon on the defensive, so the company has yet to introduce an aggressive strategy going forward. 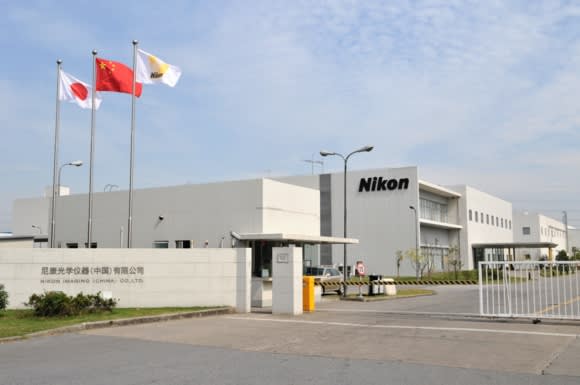 Last November, Nikon suddenly backtracked on its medium-term management plan and began structural reform, driven largely by the struggling camera and semiconductor exposure apparatus sectors that account for 80% of sales.

Nikon President Kazuo Ushida said, "Now is a good time to push through reforms since our company is still sound financially." He has since shifted the company from a strategy of expansion based on increasing sales and gaining bigger market share toward one of profitability. The first stage of the reform focused on downsizing domestically by slashing some 1,000 jobs and easing back on development of advanced manufacturing equipment for semiconductors.

Back then, Nikon Senior Executive Vice President Masashi Oka, who is heading the reform, said that the company is "considering various options."

The closing of the Jiangsu plant signals the start of the second stage.

The effects are already being felt. The company's earnings projections released on Oct. 30 show that consolidated operating profit for April-September likely reached 23 billion yen ($203 million). Despite being down 15% from the same period last year, the new figure represents an upswing of 6 billion yen from the previous forecast.

Nikon said reforms would continue until the end of March 2019, after taking into account the time needed for effecting fundamental change at the company, which marked its 100th anniversary this year.

"We must first change our earnings structure and business mentality before embarking on our next growth strategy," Oka said, noting that the company had focused too much on growing sales figures and expanding market share with less regard for costs. Nikon's semiconductor exposure apparatus is a case in point, with development costs ballooning but with little to show for growing market share.

The profit-oriented measures, however, are not a cure-all. Rivals Canon and Fujifilm Holdings have gone on merger and acquisition sprees -- mostly in the medical field -- to develop revenue streams outside of cameras and multifunction printers. Although Nikon is also working to strengthen its fundus camera and regenerative medicine segments, there are uncertainties regarding market growth and other factors.

The surging demand for intermediate-level cameras among people who prefer cameras to smartphones is providing an unexpected tailwind for Nikon's two rivals, with sales of mirrorless models rising particularly.

Nikon, however, may have missed the boat, as it has not released any new mirrorless camera models since 2015.