In addition to its offshore credit rating sinking deeper into junk territory, the privately held company, which has spent at least $40 billion buying assets around the world, is reportedly being probed by multiple overseas regulators.

Germany's financial watchdog Bafin is investigating whether the Hainan-based company had accurately reported its holdings while building a 9.9% stake in Deutsche Bank, according to a report by Bloomberg.

The query was prompted by a disclosure of the Chinese company's shareholding structure in July, which claimed that its biggest shareholder was a nonprofit entity based in New York -- an organization that sprang into existence only last December.

Bafin's examination follows the Swiss Takeover Board's ruling on Nov. 22 that the Chinese company had provided false information when taking over Zurich-based airline caterer Gategroup Holding, which HNA is looking to spin off in an initial public offering.

The shareholdings of the top two stakeholders -- Bharat Bhise and Guan Jun -- were not properly revealed in the offer prospectus, according to the Swiss Takeover Board. The regulator believed Bhise and Guan acted as trustees, holding the shares on behalf of HNA co-chairmen Chen Feng and Wang Jian, CEO Adam Tan and three other senior officers.

Meanwhile, several of HNA's listed subsidiaries are facing financing difficulties as credit rating agencies and investment banks have raised questions about the health of the company.

HNA Group's total outstanding debt hit 637.5 billion yuan ($96.4 billion) as of November, up 36% from the end of last year, according to a filing to China Central Depository & Clearing. New debt accumulated between January and November was equivalent to 140.7% of the total assets reported for 2016.

But the company said its debt-to-asset ratio is at a historic low. "For fiscal year 2016, it decreased to 59.5%, the seventh consecutive annual decline, and that trend continues," said HNA's spokesperson in an email to the Nikkei Asian Review.

S&P Global on Tuesday sounded an alarm bell over the conglomerate's "aggressive acquisition policy, tolerance for high leverage, and contracting liquidity burdened by significant debt maturities over the next several years." The assessment was made in a report explaining the credit downgrade of Swissport, a cargo and ground handler bought by HNA in 2015.

The Swiss subsidiary was found to have lent 400 million euros ($471 million) to an HNA affiliate outside mainland China at an 8% coupon rate after receiving 718 million euros of pure cash equity from its Chinese parent.

"These loans support our view that HNA Group could divert assets from Swissport or burden it with liabilities in the event of financial stress," said S&P Global on Tuesday. The agency recently cut HNA's group credit profile to "B" from "B+."

The downgrade was unveiled a week ago in an S&P report on New Zealand's UDC Finance, a unit of ANZ Bank that HNA is in the process of buying.  The report suggested HNA's deteriorating debt servicing ability might bring collateral damage to the creditworthiness of the New Zealand lessor.

"While HNA Group continues to access the capital markets, its funding costs appear to be meaningfully higher than a year ago," said S&P. 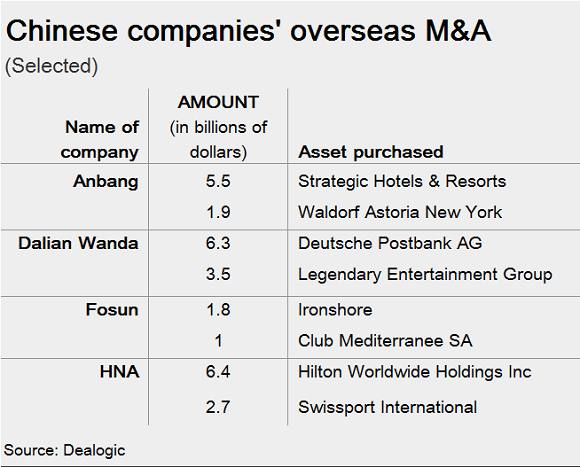 Early last month, the company sold a $300 million note with a duration of just under a year by agreeing to pay an interest rate of 8.875%, compared to the average 5.5% offered to other Chinese issuers during the first half of this year.

One of its onshore subsidiaries is likewise facing financing challenges. Shenzhen-listed HNA Investment said in a filing on Tuesday that it decided to scrap plans for a private placement of shares worth 5.22 billion yuan. The deal was meant to finance a 19.6% stake in a local insurer and the buyout of a medical company.

It is also the vehicle through which HNA backs its property trust, HNA Commercial REIT, which has 46% of its assets in Australia, 27% in the U.K., and 26% in Singapore. The company is preparing to float the REIT on the Singapore Exchange, in hopes of raising 775 million Singapore dollars ($574 million). But the plan was reportedly hampered by the withdrawal of banks advising the embattled company.

Having logged a net loss of 34 million yuan for the third quarter, HNA Investment said it had yet to receive an approval document from the China Securities Regulatory Commission for the placement plan, even though it was greenlighted last May.

The financial watchdog announced in February that it would curb additional fundraising by A-share companies -- firms with shares that trade on the two Chinese stock exchanges-- in a bid to aid Beijing's drive for corporate debt reduction. The program dovetails with recent restrictions against investments related to property, hotels, film, entertainment and sports abroad.

HNA Group CEO Tan Xiangdong told local media last week that the company is trying to offload assets that are not in line with China's national strategy. It is negotiating with a financial institution and other parties to sell part of its stake in Spanish hospitality group NH Hotel.

HNA's ascendancy was widely attributed to its linkage with Wang Qishan, the former head of the Communist Party's Central Commission for Discipline Inspection. Wang left the Politburo in late October, during the twice-a-decade party congress. But he was reportedly given the rare privilege of attending meetings of the party's top decision-making body, the Politburo Standing Committee, even after retiring from official posts, and therefore expected to continue to wield significant influence.

HNA's fate, many believe, could depend on how things shake out for Wang, who stands to become China's next vice president, according to Hong Kong's Sing Tao Daily.