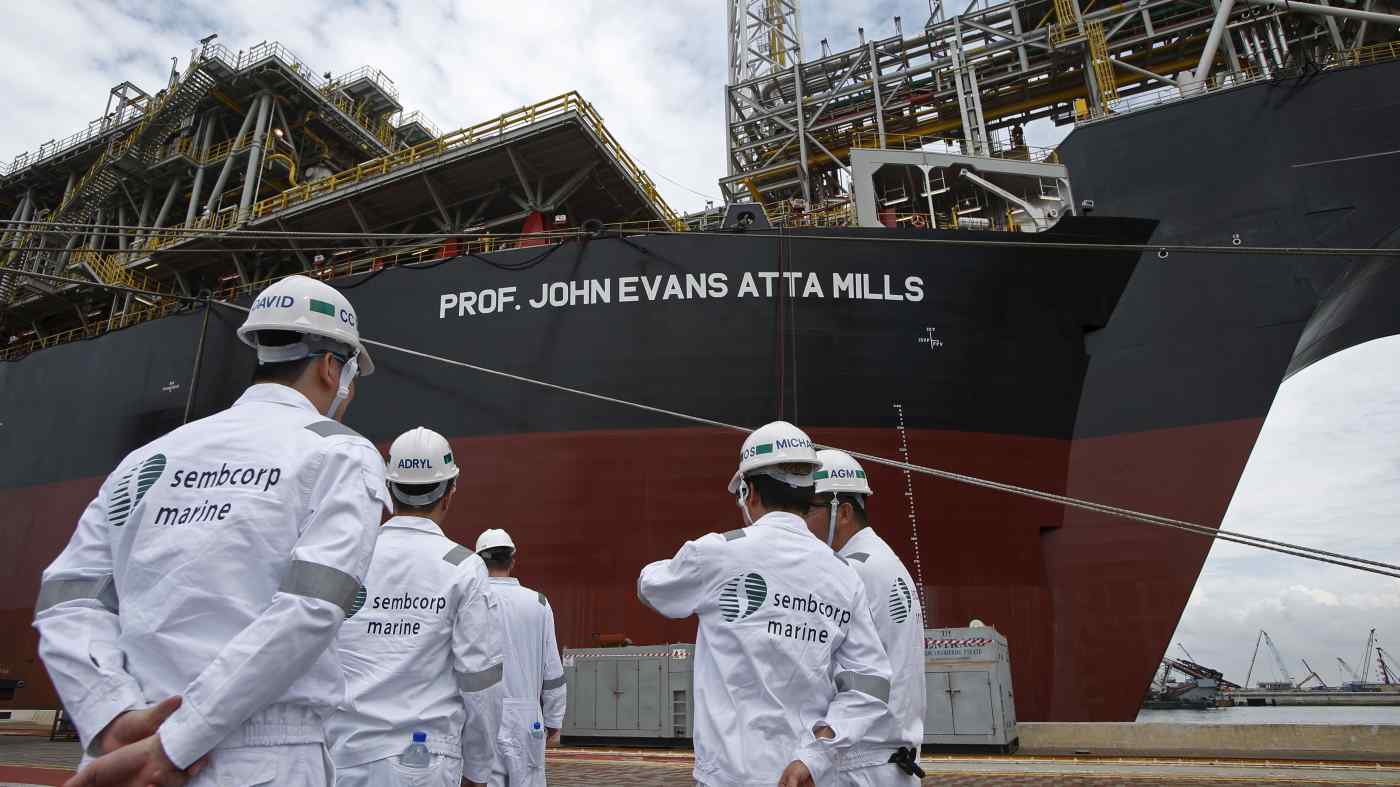 SINGAPORE -- The shipyards spanning the western coast of Singapore represent the city-state's crucial marine industry, a sector that has helped turn the country into one of Asia's leading port cities.

But with the COVID-19 pandemic disrupting operations and other problems on the horizon, the sector is under immense pressure to change.

On Monday, Keppel Corp. said that state-owned investment company Temasek Holdings -- holder of 20% of Keppel shares -- was withdrawing a bid to acquire a majority stake in the marine giant due to its sinking financials.

The $3 billion deal would have resulted in the restructuring of Keppel, which had been struggling as a result of weak oil prices. But Keppel's first-half earnings showed a net loss of 537 million Singapore dollars ($390 million) from a net profit of SG$356 million a year ago, breaching one of the deal's conditions.

Keppel's share price dropped over 10% the next day as investors fretted over restructuring.

Keppel was established in 1968 as a ship repair yard just three years after the nation's independence from Malaysia, a spinoff from the dockyard department of the Port of Singapore Authority. It is a Singapore icon and key contributor to the country's rise as a major port, well before the city became a major financial hub.

Its businesses range from constructing offshore oil rigs and repairing ships to building highly specialized vessels. The Keppel name is well-known throughout the global marine industry.

Before the novel coronavirus hit, the country's marine sector was already facing tough times. According to the Association of Singapore Marine Industries, the industry generated turnover of SG$10.3 billion in 2018 -- down 39% down from SG$16.8 billion in 2008.

Weak rig demand stemming from volatile oil prices hurt the marine sector, along with the overall global shift to clean energy. Moreover, Asian marine companies have been locked in a battle for regional supremacy, notably China's International Marine Containers and South Korea's Daewoo Shipbuilding & Marine Engineering. These players -- both with global reach -- have become stronger through mergers and acquisitions. Since its marine founding, Keppel has become a multifaceted conglomerate, branching out into real estate and infrastructure development. The marine side of the business accounted for about 30% of the group's SG$7.5 billion in total revenue, its slump in recent years being offset by the group's other businesses.

Then the pandemic struck, significantly weakening oil demand as airplanes were grounded and oil rig orders plummeted. Singapore's marine sector employs thousands of low-wage migrants workers, but most have not been able to work due to a massive coronavirus outbreak in dormitories.

Keppel's 24,000-strong workforce staff has seen only 5,000 employees return to work as of late July. When others return, beefed up safety measures for their working and living conditions could result in higher company costs.

Meanwhile, Keppel's local peer Sembcorp Industries, which also counts Temasek as its largest shareholder, reported a net loss of SG$131 million for the first half of 2020, compared to a net profit of SG$191 million a year ago. On Tuesday, it held an extraordinary shareholders meeting during which it was agreed to spin off listed subsidiary Sembcorp Marine, which will make a rights issue that is to be backed by Temasek, providing a line of liquidity for the marine unit.

An independent Sembcorp Marine would become attractive for a merger, perhaps with Keppel's marine unit or another global suitor. Still, there is a possibility that both Keppel and Sembcorp operate separately. But some restructuring, such as shedding losing businesses, would be necessary.

The trouble goes beyond Singaporean companies. Swire Pacific, a Hong Kong-listed British conglomerate, announced on Thursday that its Singapore-based marine service business suffered a 22% drop in revenue during the first half of the year to 1.01 billion Hong Kong dollars ($130.3 million). The net loss worsened to HK$4.967 billion from HK$611 million a year ago, as the company took HK$4.345 billion in impairment charges on its vessels and related assets in "view of deteriorating industry conditions," according to Michelle Low, Swire's finance director.

"It's been very tough at this point of time for the marine business," Chairman Merlin Swire told reporters at Thursday's online press briefing. He said the company has "taken some pretty severe measures," including an undisclosed number of staff cuts and shedding 28 out of 72 vessels by year-end.

Keppel said it would explore new areas such as renewables, environmental solutions and nearshore floating infrastructure in its midterm plan unveiled in May. Yet, there has been increasing speculation of a potential merger between the marine units of Keppel and Sembcorp.

"Given the dour outlook for the oil market and ancillary businesses, there is no reason for two government-linked corporations to be engaged in what are essentially the same businesses," Justin Tang, head of Asian research at United First Partners in Singapore, told the Nikkei Asian Review. "A merger would result in plenty of cost synergies and is something to be looked at seriously." 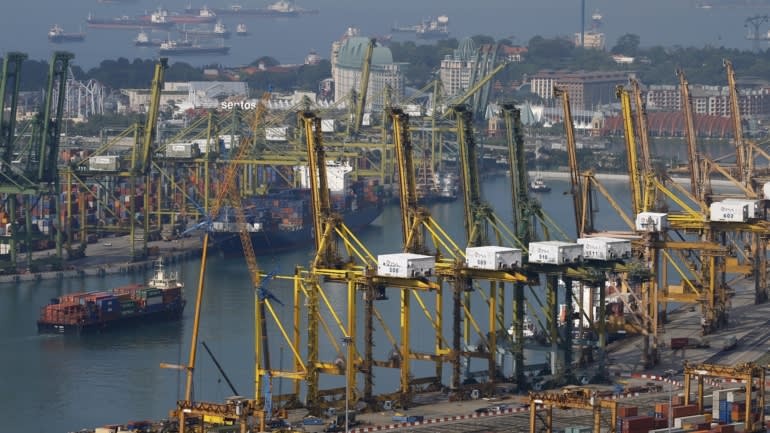 A weakening marine sector could have a big impact on Singapore's economy.   © Reuters

That the two state-linked companies operate in the same space may raise questions among investors, but it was natural for Singapore to back multiple players decades ago as it sought to expand the marine sector while demand was increasing globally.

Keppel was turned into a company from the dockyard department of the port authority, whereas Sembcorp began as a joint venture between the government and Japanese heavy-industry giant IHI. As they became conglomerates, diversifying into non-marine businesses that could offset marine units' weakening performance, incentives for marine business consolidation might not have been as strong.

While Singapore will remain a port city and Asian trade hub, a weakening marine sector could have a broader impact on the economy, especially as regards employment: The labor-intensive industry employed 64,300 people in 2018. It could also hurt small and midsize businesses such as manufacturers of ship components and paint companies.

As the pandemic gradually creates a new normal, the Singapore government also plans to revamp the economy, laying out plans to shore up specific industries in the coming weeks. It remains to be seen what the government has in store for the marine sector as it pushes toward a digital-driven economy.

Remaking Singapore's marine sector "is possible but not probable against the backdrop of challenges that the sector and the world are facing," said Tang of United First Partners.

"While the world will return to a new normal when a vaccine is found, some industries will be irreparably damaged, reducing demand," he said. "On the supply side, new technologies will continue to provide alternatives and create further market imbalances."