StarHub chief steps down at 54 to 'pursue my own interests' A man talks on his mobile phone as he walks past a StarHub shop in Singapore.   © Reuters

SINGAPORE -- Singapore's second-largest telecom carrier StarHub said its CEO Tan Tong Hai will step down next May. The surprise announcement came on Friday after the market closed. 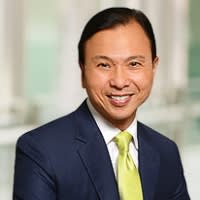 The company has so far not given any reasons for the resignation, although Tan said in a press release that "it is now the right time for me to step down to pursue my own interests." He added that he will work with the board "in its global executive search to ensure a smooth transition."

Under his leadership, StarHub significantly developed its enterprise business, helping the company expand through acquisitions and investments, including in local media company mm2 Asia.

The announcement comes as StarHub faces tough competition in its Singapore home market. Net profit in the third quarter ended in September fell 11.5% to S$76.2 million from a year ago, mainly due to a decline in service revenue, lower income grants and higher operating expenses.

Competition in the city-state is growing as telcos fight for customers in a market where penetration of smartphone and mobile broadband exceeds 100%. Competition is not only against the likes of major rival Singapore Telecommunications, but also against emerging fourth mobile-network operator TPG Telecom.

StarHub has been working with external partners to upgrade its offerings. Last month it announced a strategic partnership with Oversea-Chinese Banking Corp., Singapore's second-largest lender by assets, to spend S$6 million over a year on research and technology focusing on artificial intelligence and the internet of things, to improve customer experience. The carrier also joined with China's messaging app WeChat, operated by Tencent Holdings, to launch a new SIM card that offers travelers unlimited service during their stay in Singapore.