OITA, Japan -- A small Japanese lumberyard on the southern island of Kyushu is building a foothold in the U.S. market by carving an opportunity from Washington's trade battles with Beijing and others.

Koichiro Seto, president of Seto Seizai, visited Florida in December to see with his own eyes how cedar wood is used in American construction.

"Products with added value will sell, even at a higher price point," Seto said, revealing what he gleaned from the trip.

The roughly 50-person company was founded in 1912. Seto, its fifth-generation chief, thinks the U.S. could prove an attractive market for Hita cedar, a type of Japanese cedar grown largely in the lumberyard's home prefecture of Oita.

Hita cedar is easily processed but can withstand significant vertical force. Seto sees the lumber as an alternative to western red cedar, a popular construction material in the U.S. In addition, sending Hita cedar from Japan to the U.S. costs little more than shipping western red cedar across North America. 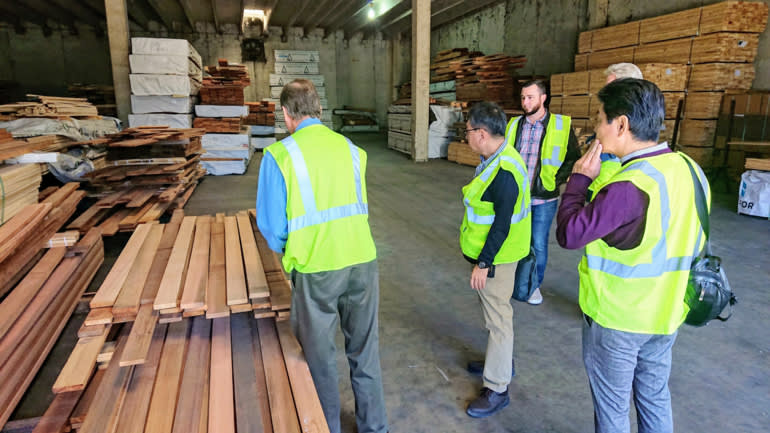 In return for Seto's visit the chief executive of a Florida-based trading house visited Seto Seizai in February.

"I was told to have pride in Japanese-made products and to not sell our products short," Seto said. The executive advised Seto on how to advertise effectively in the U.S., encouraging him to dive into the American market.

Seto Seizai started exporting Hita cedar in 2011. But overseas shipments initially accounted for just 1% of revenue, with many of them going to China.

Rising trade tensions in recent years have opened doors. After Washington slapped high tariffs on Canadian lumber, Seto Seizai began exporting wood to the U.S. for use in fences. The U.S. has since raised tariffs on Chinese lumber as well.

Seto, who earned a doctorate from the University of Tokyo while leading his company, sees a chance to grow.

"Japan may ship relatively little construction-related materials to the U.S., but the products push the envelope," he said.

The market for Japanese cedar faces headwinds after Tokyo lifted restrictions on cheap imports. Though the country has become more self-sufficient for lumber in recent years, the domestic housing market is only shrinking as the population declines.

Seto Seizai thinks its future lies in the U.S. The company recently received new orders from Florida despite the coronavirus pandemic.

"I want to cultivate new fans for Hita cedar on the East Coast as well," Seto said.