TOKYO -- Heavy snow and frigid temperatures in and around Japan's capital have put key infrastructure to the test, forcing the area's main power provider to call in pledges from large customers to use less electricity at peak times.

Power usage on Tokyo Electric Power Co. Holdings' grid hit 95% of capacity Monday night as snow fell and customers turned up the heat, bringing demand near the level where outages become a concern. And so the utility sent out its first order for "negawatts," paying certain big customers to conserve power and reduce the overall load.

Tepco has long used emergency generators to cope with demand spikes. Since April 2017, the government-organized negawatt system has offered another source of emergency capacity. Major power consumers such as factories agree to reduce consumption when the utility deems it necessary, and are rewarded both for being on standby and for when they actually answer the call with credits to their bills.

If Tepco were to call in all of its negawatt contracts, power usage would drop by nearly 500 megawatts. Yet this is less than 1% of Monday night's demand, which topped out around 51,000MW. On Tuesday and Wednesday, Tepco drew as much as 2,000MW from other utilities, keeping its grid at 95% capacity, rather than the 99% that could have otherwise been reached. This is the first time in around three years that Tepco has drawn power from its peers.

Drawing on negawatts at peak demand avoids the need to keep fuel on hand to increase plants' output, as utilities have traditionally done. The system could also reduce the need for capacity increases in the long run. Such arrangements are growing more popular in Europe; even Tepco outsources its negawatt operations to the local unit of France's Energy Pool. 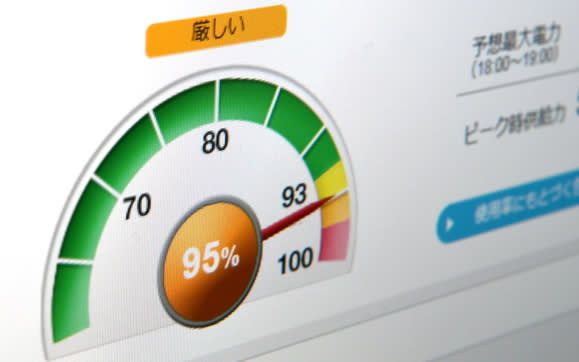 Demand for heat has pushed electricity usage on Tokyo Electric Power Co. Holdings' grid to 95% of capacity over the past several days.

Meanwhile, Tepco continues to do what it can to keep its customers warm. The utility has called in negawatt contracts for four days straight, and drew on more power from its peers between 6 p.m. and 7 p.m. Thursday, when usage was expected to hit 96% of capacity. Further challenges are expected, giving Tepco's negawatt operations a vigorous first run.

The heavy snow has also played havoc with Tokyo's transportation system. The Monday storm closed 230km of highway in the capital region, around 70% of the key arteries' total length. Portions of three major routes remained closed as of Thursday, though the head of Tokyo's Metropolitan Expressway Co. has said full service is expected by Friday morning. 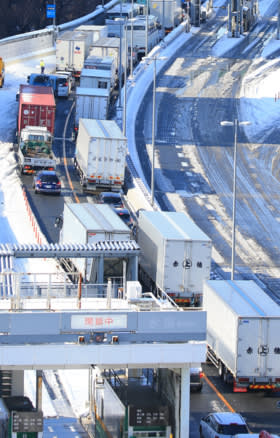 Home deliveries by Yamato Transport are experiencing delays of up to a day or so nationwide as drivers abandon closed-off highways for local streets. It is expected to take several days for the Yamato Holdings unit to restore normal service.

Some retailers have made a quicker recovery. The FamilyMart chain of convenience stores has said business is mostly back to normal in the greater Tokyo area and surrounding prefectures, though product shipments were delayed by several hours Thursday to the FamilyMart UNY Holdings unit's stores in particularly mountainous parts of central Japan. The company had products shipped in advance to stores expected to be affected by snow. Peers Seven-Eleven Japan, a unit of Seven & I Holdings, and Lawson took similar precautions.

Nikkei point-of-sale data shows sales at Tokyo-area retailers rose 7-20% on the week on Saturday and Sunday as shoppers prepared for the storm. They plunged 26% and 25% on Monday and Tuesday.