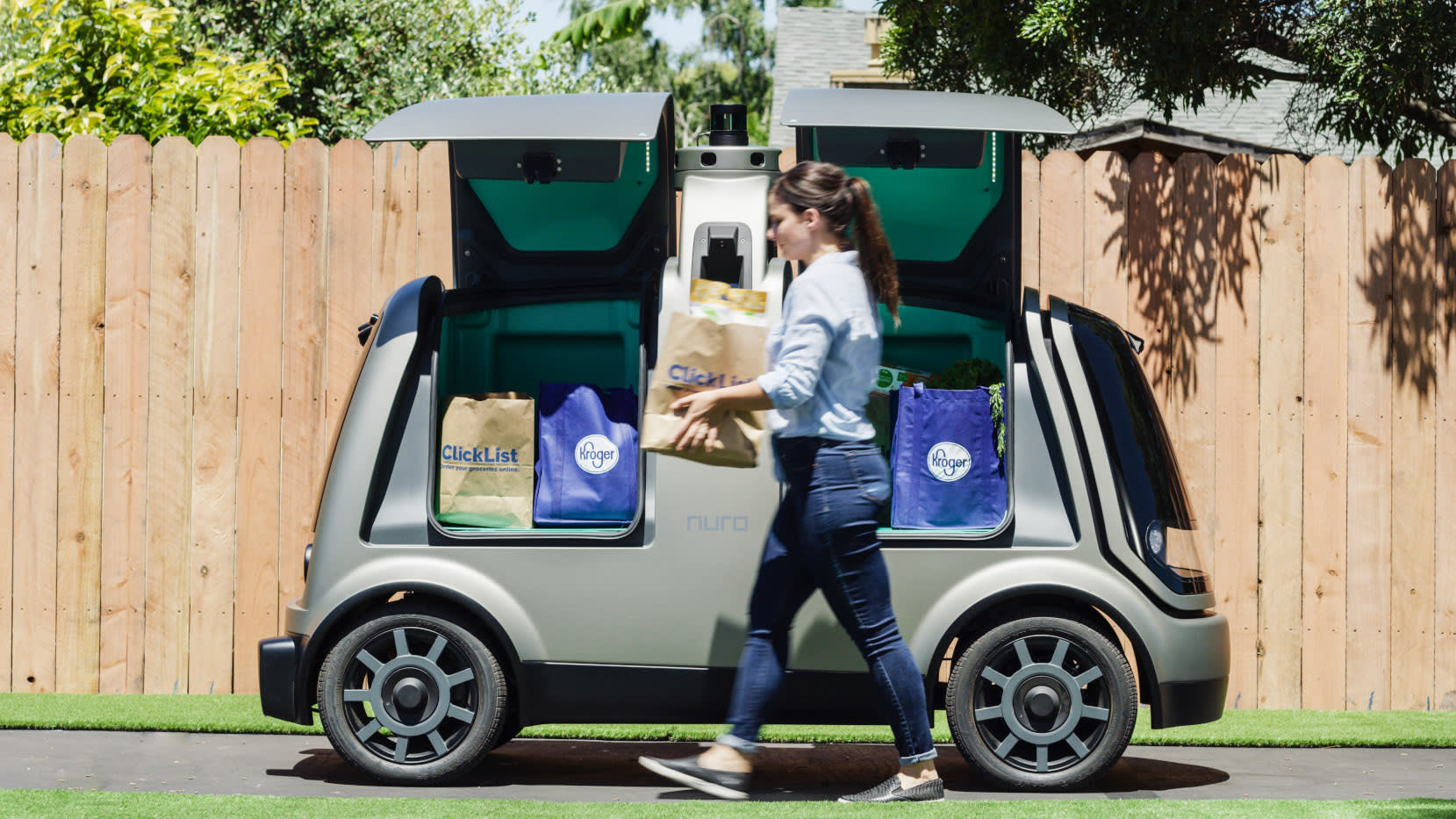 A Nuro car is used in a self-driving grocery delivery service in the U.S. state of Arizona under a tie-up with Kroger. (Photo courtesy of Kroger)
ALEX FANG and WATARU SUZUKI, Nikkei staff writersFebruary 12, 2019 05:59 JST | North America
CopyCopied

NEW YORK/TOKYO -- SoftBank Group is investing $940 million in driverless-delivery startup Nuro through its $100 billion Vision Fund under plans announced Monday by the Mountain View, California-based company, valuing it at $2.7 billion.

The announcement came only months after Nuro launched an unmanned delivery service for the public with Kroger, a grocery seller dating back to 1883. Privately held Nuro was founded in 2016 by two alumni of Google's self-driving team, now Waymo.

The SoftBank partnership "gives us the opportunity to take the next step in realizing our vision for local commerce and the broad application of our technology," Nuro co-founder Dave Ferguson said in a news release.

Nuro said it will use the funding to expand its delivery service to new locations, add new partners, scale its fleet and mature its technology.

SoftBank has invested in a number of online food delivery services that could team up with Nuro in the future. These include San Francisco-based DoorDash, which offers subscriptions allowing unlimited deliveries for $10 a month, and Mountain View-based Zume, which uses robots to help make pizzas. Zume trucks have ovens to bake the pies en route. 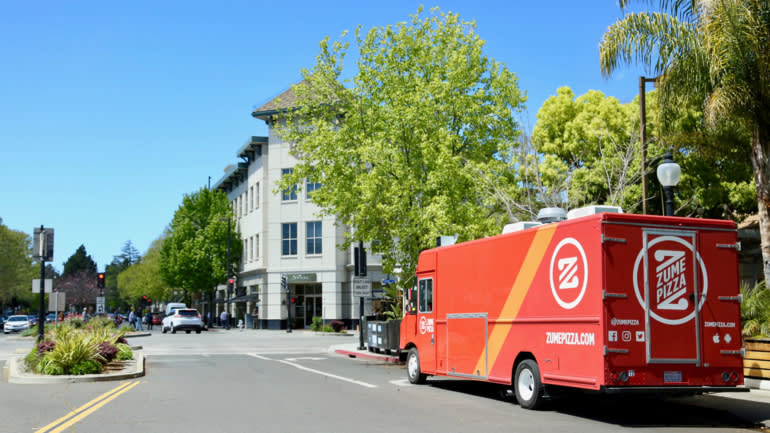 SoftBank has also invested in California-based startup Zume, where robots put pizza in the oven and otherwise help out. (Photo courtesy of Zume)

Transportation has been a core investment area for the Vision Fund, which makes bets on leading-edge companies related to artificial intelligence.

It holds stakes in ride-hailing giants including Uber, Singapore-based Grab and India's Ola. These together cover about 90% of the global ride-hailing market, SoftBank has said. The fund has also acquired roughly 20% of General Motors driverless-vehicle unit GM Cruise for $2.25 billion.

SoftBank CEO Masayoshi Son predicted in a Feb. 6 earnings briefing that ride-hailing companies and other businesses will be the first owners of the vehicles because they will still be too costly for consumers.

"That means our group will be the biggest customers of self-driving vehicles," Son said.

SoftBank could invest in companies building related technologies, he said.

Its new interest in Nuro, which deploys such technology in the retail space, shows that the company is taking a targeted approach to the broader theme of self-driving tech, said Geoff Blaber, vice president of research for the Americas at CCS Insight, a technology-focused research firm based in the U.K.

"This move points to the bigger and nearer opportunity in autonomous driving, which is in verticals where it's operated in a tightly controlled and limited environment," Blaber said. "That's where the growth will manifest itself first."

"This will also give SoftBank a good platform to test the concepts and what adoption is really like," he said.

Carolina Milanesi of San Jose-based market research company Creative Strategies said that while much attention goes to autonomous driving for cars and fleets to carry human passengers, opportunities are broader in Nuro's business of delivery.

"If you look at Amazon, but also the myriad of services that deliver food, you can see just how big the opportunity as well as the need is," Milanesi said by email.

"Delivery times will set online retailers and services apart which means they will be looking to innovate and stay ahead of the game," she said.