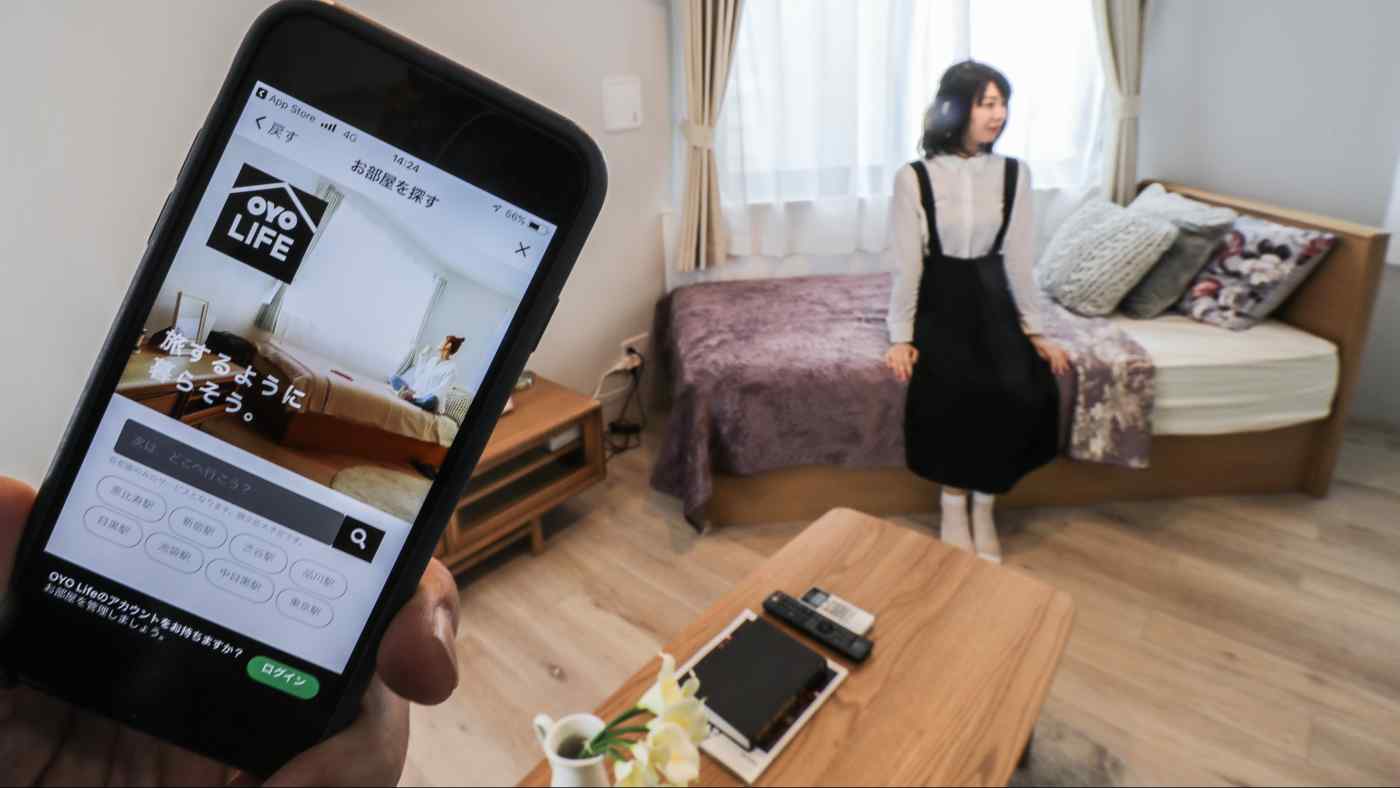 TOKYO -- The Japan residential unit of India's Oyo Hotels & Homes has suffered a dramatic drop in valuation after its joint venture partner sold its $77 million stake for a nominal $3.

The sale by Z Holdings, a SoftBank Group affiliate, of its stake in Oyo Life for just 339 yen reflects the seismic shift in startup valuations following the collapse of the WeWork float last autumn. Since then, Oyo and other SoftBank-backed startups have been forced to prioritize profitability over growth.

Oyo Life plans to downsize by transferring staff to WeWork and other SoftBank-affiliated companies, sources familiar with the company told the Nikkei Asian Review. The sources said the unit aimed to break even by March by raising occupancy rates and cutting costs, although Oyo said there was "no set deadline to break even."

SoftBank, which also backed WeWork, has been pressing parent Oyo to become profitable, partly by scaling back noncore businesses, according to sources. Z Holdings is controlled by SoftBank Corp., part of the SoftBank Group.

Group CEO Masayoshi Son, who also sits on the board at Z Holdings, pledged last year in the wake of the WeWork debacle that there would be no more "rescues" of companies in the SoftBank portfolio.

Oyo launched Oyo Life less than a year ago with the goal of offering one million rooms. It aimed to lure Japanese millennials by making it simpler to rent apartments, and also sought to create synergies with rental apartment operator MDI, which SoftBank and Oyo acquired from a third party.

But Oyo Life has only managed to sign contracts for about 7,000 rooms, with 4,200 currently occupied.

"The business model is too expensive to maintain," said a former executive.

For its part, Oyo said, "Our performance is aligned with our expectations, which are backed by our business plan."

Oyo Life announced the sale, but did not give details. "Oyo, Oyo Life and Z Holdings had discussions, and the decision was made taking into account each of their respective medium- to long-term strategies and goals," the company said at the time.

In response to Nikkei's inquiries, Z Holdings said it was not disclosing the sale and purchase prices. Oyo said it did not comment on market speculation.

The company is now transferring a large number of employees to other SoftBank affiliates in Japan, such as WeWork and mobile payment company PayPay, according to current and former employees. Those being transferred are mostly in sales. A person familiar with the plans said about 150 people will be affected, or nearly half of Oyo's recent workforce.

Oyo has laid off more than 1,800 employees in India, but is reluctant to trim its workforce in Japan, partly due to pressure from SoftBank to prevent further damage to its reputation, according to a former Oyo Life executive.

Oyo told Nikkei that companies across SoftBank's portfolio in Japan were "executing joint projects as well as employee secondments ... [in a] mutual process."

Oyo Life allows people to search, sign rental agreements, and pay for apartments via a mobile app. It offers fully furnished rooms, complete with Wi-Fi and other amenities, and does not collect brokerage fees, security deposits or other charges.

Under a subleasing agreement, Oyo Life is required to pay the rent for each listed residence, regardless of whether it is occupied. This led to heavy losses as it residence inventory piled up. Within months of starting operations, the company ramped up hiring, further adding to its financial burden. At one point, the company had about 500 staff on payroll, including contract workers and part-timers.

Oyo Life has also come under fire from consumers. Some say the company does not properly explain how to obtain keys, while others complain of rooms that lack furnishings as shown in the rental listings. A person with knowledge of company finances said it stopped outsourcing customer support in a bid to lower costs, which left it lacking staff to handle the hundreds of daily inquiries.

Multiple sources say SoftBank is encouraging Oyo to merge its residential unit with the Japan hotel unit as part of the overall drive to focus on profitability.

"Oyo Life has no other choice but to merge with Oyo Hotels Japan, as suggested by SoftBank," said a person familiar with the matter. "Son must have realized that Oyo Life does not work in Japan. To avoid damaging the brand, he probably thinks it's better to continue the residential business under Oyo Hotels Japan, but shrink it significantly."

An internal document estimates a 75% decline in the number of occupied rooms through the end of the year from the current 4,200.

Son called Oyo "wonderful" at an earnings conference last month. "Because Oyo is still a young company, there are some disagreements and changes in the menu," he said. "But the reality is that the number of hotels, members and guests continues to grow."