TOKYO -- SoftBank Group Chairman and CEO Masayoshi Son on Monday said the company was committed to running its Saudi Arabia-backed investment fund, despite looming concerns over the kingdom's role in the murder of Saudi journalist Jamal Khashoggi.

"It was a truly horrific incident that should never happen," Son said at a news conference, his first public appearance since Khashoggi's killing. "I sincerely hope there will be a responsible explanation."

The trouble surrounding SoftBank's $100 billion Vision Fund comes as Son looks to move 6,800 employees out of the group's mainstay telecommunications business -- about 40% of the staff -- to prepare for further reductions in service fees.

Son said he canceled an appearance at a conference in Riyadh last month but met with Saudi Crown Prince Mohammed bin Salman and other officials "to express concern" over the case.

But "these funds are important to the Saudi people in ensuring their economy diversifies and is no longer dependent on oil," Son said on Monday. "We have a responsibility towards the Saudi people, and we must carry out our responsibility rather than turn our backs on them." Saudi's public investment fund contributed $45 billion toward the Vision Fund.

"We should fulfill our responsibility to the future of the people," he said.

SoftBank's first-half earnings results, announced on Monday, indicated how important the fund has become. The group reported 840 billion yen ($7.41 billion) in net profit during the April-September period, an eightfold increase from the previous year. Operating profit rose 62% on the year to 1.42 trillion yen, thanks to a rise in the value of the Vision Fund's investments in U.S. chipmaker Nvidia and Indian budget hotel startup Oyo. 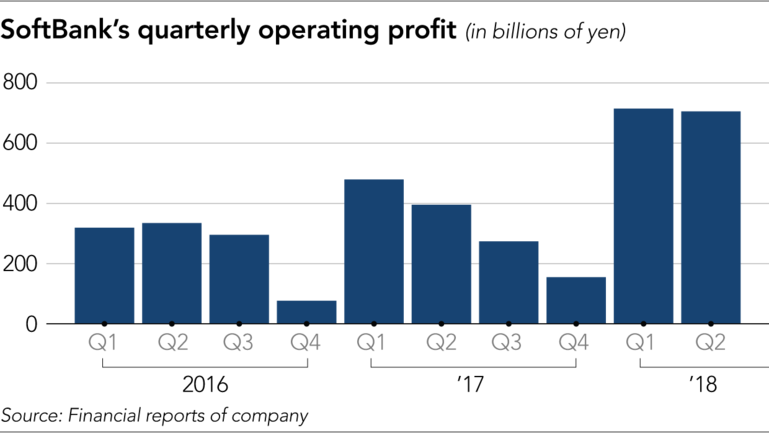 But he also struck a cautious tone about the company's relationship with the Saudis. SoftBank will consider launching a second Vision Fund "after the truth of the incident is explained," Son said, adding that the murder may have "some effect" on the fund's reputation in Silicon Valley.

On Monday, Son also unexpectedly announced plans to reduce 40% of the workforce in SoftBank's telecommunications business to cut costs. The move comes after NTT Docomo, Japan's largest carrier, announced plans to cut service fees by up to 40% next year. SoftBank is planning an initial public offering of its mobile unit in December.

Japanese carriers have been under pressure to reduce rates after Chief Cabinet Secretary Yoshihide Suga said that he believes phone bills can be 40% lower than current standards.

"We must listen very seriously and act accordingly," Son said of Suga's remarks at the earnings conference. It was uncharacteristic of Son, who is not known to be shy about fighting back against the government.

"We have already cut prices by 25% to 30% and are one of the cheapest telecommunications companies in the world, " Son said, but he promised to do more.

Son said robots will take over much of the work that was handled by the staff he plans to move away from the telecommunications business. These employees will move to growth areas for SoftBank, including artificial intelligence and the "internet of things."

While NTT Docomo has predicted a drop in profit for the full year, SoftBank maintains that cost reductions will enable the company to secure growth despite the challenges.

Son's game plan is to detach the group's mainstay telecom business, just like the group's other companies, and have the parent holding company focus on investing in promising entities around the world through the Vision Fund.

Becoming Uber's top shareholder was one such model, and the Vision Fund has become a presence in the startup funding world.

But that game plan, and Masayoshi Son's nose for survival, is being put to the test.