SoftBank Chairman and CEO Masayoshi Son met Monday with Rwandan President Paul Kagame and other top African officials at the African Union summit in the Mauritanian capital of Nouakchott.

The African officials talked about the AU's plans to add 300 gigawatts of solar energy. Son explained that SoftBank, through the $100 billion SoftBank Vision Fund, had invested in various solar power projects around the world, and would be able to take part in or provide support to African projects.

This follows a March deal between SoftBank and Saudi Arabia to build one of the world's largest solar projects in that country, with $200 billion to be invested by 2030 in 200GW of capacity. The Japanese tech conglomerate is also holding talks with the Indian government on a proposal for a megasolar project, according to a senior SoftBank executive.

The Vision Fund, in which Riyadh is a major investor, would shoulder only about 20% of the cost in each case, with the rest to be backed by revenue from electricity sales contracts. 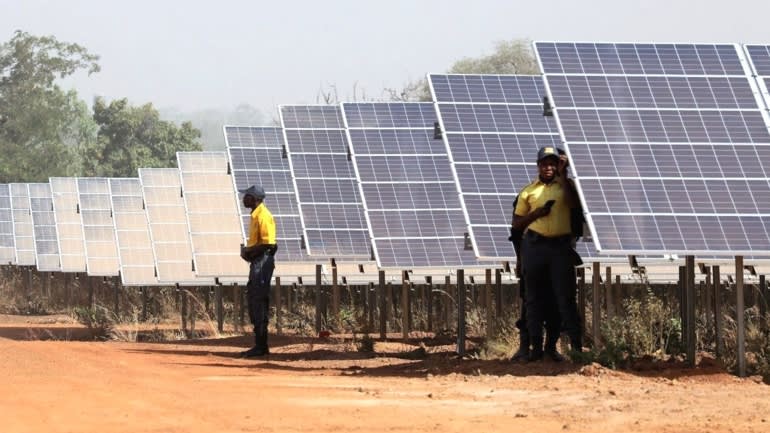 SoftBank invests -- both directly and through the Vision Fund -- in businesses that work on or have potential connections to emerging technologies such as artificial intelligence and the "internet of things." Its portfolio includes American ride-hailing giant Uber Technologies and British chip designer Arm Holdings.

Such companies need a steady supply of electricity to power their growth. SoftBank looks to tap into the other side of this equation as well by funding renewable energy and battery production.

Solar projects can also help the company fund its other investments. Son has said he is planning sequels to the Vision Fund, which is on track to burn through its capital within a few years at its current spending pace. But finding investors for such new funds may prove challenging, and SoftBank may not be able to find another rich Middle Eastern government like Saudi Arabia for a partner.

But because many countries have feed-in tariff systems under which solar power is bought at a fixed price, megasolar farms can provide a stable, long-lasting flow of cash at relatively low risk.