TOKYO -- Inside Airbus' plant in the south of France, workers dressed in cleanroom suits are piecing together satellites by hand. The installation of each part represents a small step toward a giant communications leap -- a prospect that has attracted some of the biggest stars in business, from Richard Branson to SoftBank Group Chairman and CEO Masayoshi Son. OneWeb, a U.S. startup founded by big dreamer Greg Wyler, plans to test-launch 10 of the satellites from French Guiana in March. If the testing goes well, the company intends to launch more over the course of two years at a pace of 36 satellites every 21 days. This will blanket Earth with a constellation of 720 -- 900 if you count reserve units.

Coupled with ground stations, this should make the internet accessible from any spot on the planet.

A $1 billion investment from Son's SoftBank Vision Fund is helping to pay for the ambitious endeavor. When Son and Wyler first met in September 2016, the latter quickly recognized that Son was a long-term thinker who understood the true significance of the satellite project.

Son asked simple, practical questions, Wyler recalled: How quickly could the project get off the ground? How would communications performance be upgraded? Son also touched on the obvious link between OneWeb's satellites and the rise of the internet of things -- the growing array of net-connected devices.

Wyler told Son about his plan to boost communications capacity by 100 to 200 terabits per year.

"He recognized very quickly that most of the world was without internet and the demand for internet access from people would far surpass the capacity we could bring," Wyler told The Nikkei about his discussion with Son. "He saw the OneWeb could help with IoT both in cities and in the developed world. And just as important, or more important, in the developing world where IoT will have a large impact on farming and smart city development."

Son subsequently agreed to serve up the $1 billion from his 10 trillion yen ($88.8 billion) Vision Fund. Thanks to the investment, the Arlington, Virginia-based OneWeb has already launched another project to build a factory in Florida, where it aims to make satellites for sale to other companies, Wyler said.

Epiphany under the stars

OneWeb has rocketed to relevance since Wyler resolved to bridge the digital divide while gazing up at a starry Rwandan sky.

Wyler had been running a company that produced semiconductor cooling devices, but he felt something was missing. He wanted to change lives. So he sold the business in 2003 and went to Rwanda, which was rebuilding after the genocide of the 1990s.

The American entrepreneur believed that enhancing education would accelerate the African country's renaissance under President Paul Kagame, and decided to create a fiber-optic network for schools. By the time Wyler had hooked up some 200 schools, the project was drawing international attention. But he had learned a hard lesson: Building a ground-based network across even a country as small as Rwanda was difficult, and yet there were still so many people unable to get online worldwide.

Wyler needed a way to connect more individuals in less time. So he looked to the heavens. 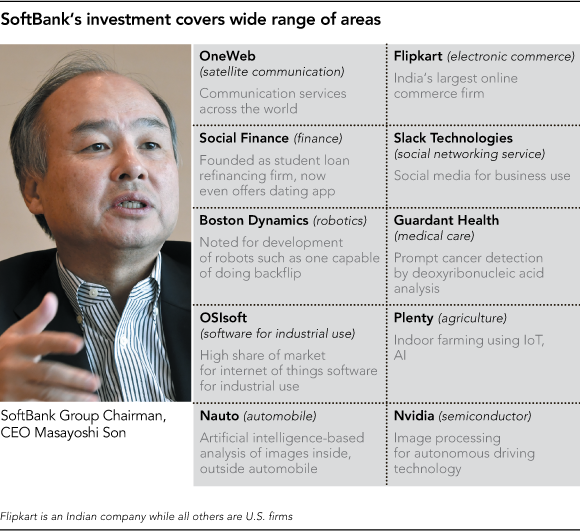 Back then, however, satellites and other necessary equipment were exorbitantly expensive. Constellation projects failed to catch up with the explosion of internet use and fell by the wayside.

Wyler, though, was determined. He scoured the globe for allies who would help him launch his communications revolution. Branson, who built Virgin Group out of a record shop and founded Virgin Galactic to pursue commercial space travel, stepped up.

Airbus, too, agreed to work with Wyler, who needed the aerospace giant's satellite expertise. An alliance with Qualcomm has allowed OneWeb to secure the semiconductors it needs to downsize the satellites and ensure high-performance communications.

Wyler said OneWeb is now able to mass-produce satellites for a tenth of the typical cost.

The plan is to launch small satellites to an altitude to 1,200km -- three times higher than the International Space Station, but well below the altitude of geostationary satellites. The low height should help maintain high communications speeds.

Each unit will cover a relatively small area, but Wyler said 720 satellites will be enough to fill any "holes."

OneWeb is not the only company taking another look at low-orbit communications satellites. Boeing is interested in the possibilities too, but Wyler said the U.S. aerospace giant is still in the early planning stages. Wyler wants to put his constellation in place ahead of potential rivals.

A lingering question is whether China and other governments that tightly control the internet will allow their citizens to access OneWeb's constellation.

Either way, Wyler sounds confident OneWeb will bring down digital barriers worldwide. It will not be easy, but he stressed that powerful backers like Son will make all the difference.

Son stunned the world in 2017 with the establishment of the Vision Fund. The 10-trillion-yen war chest is equivalent to a total amount of annual investment in startups in the world.

But this is "no more than a runup," Son told The Nikkei in a recent interview. "Ten trillion yen is not enough at all. I will use up the fund in about two years."

In his mind is a fund with an extra zero, of one hundred trillion yen.

The common denominator of the fund's investments are that they target the "third stage" of fundraising.

In the past, Son focused on earlier stages of startups, as was the case with Yahoo! and the Alibaba Group.

In contrast, the new fund invests in startups as they start to show signs of success. The investment of this kind "has a high success rate but requires a huge amount of money," Son said. "The scale of money itself is an important factor for the game."