SoftBank expects to chalk up consolidated pretax profit of 1.2 trillion yen ($11.1 billion) for the April-June period on proceeds from sales of Alibaba shares and on financial derivative gains. The figure represents about 70% of the pretax profit for the fiscal year through March, which came to about 1.7 trillion yen.

Of the expected pretax profit, the Alibaba proceeds account for 460 billion yen and the derivative gains for 740 billion yen. SoftBank initiated complex financial transactions in 2016 that have allowed it to add these sums to its pretax profit.

The portion from the derivative gains largely cancels out derivative losses that SoftBank booked in the past.

Masayoshi Son, SoftBank Group chairman and CEO, has said he does "not keep an eye out for profits appearing on the books" in steering the company. But the impact of selling the Alibaba shares was not small. In fact, they helped move SoftBank into position to surpass Toyota Motor as Japan's top profit earner. 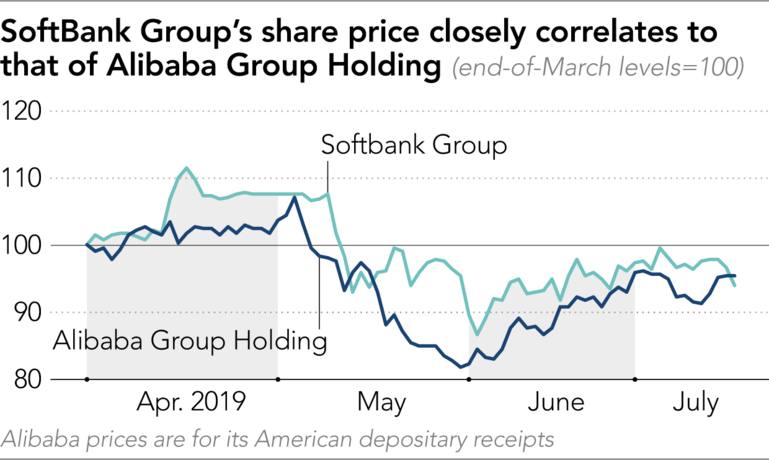 SoftBank in 2016 raised $10 billion by selling some of its Alibaba stake and by taking other measures. Of this, $3.4 billion was obtained by directly selling shares to Alibaba and investment funds; the rest was obtained through financial derivatives.

SoftBank raised 842.3 billion yen in the year through March 2018 and 161 billion yen during the following 12 months, leveraging its Alibaba shareholdings each year.

SoftBank has been able to raise this much thanks to huge unrealized gains on its Alibaba shareholdings. Of Alibaba's more than 48 trillion yen market cap, SoftBank Group can lay claim to 14 trillion yen.

All this comes from a 2 billion yen investment that Masayoshi Son made in Alibaba in 2000. The value of the bet on Jack Ma's startup.

SoftBank is expected to continue to bank on its Alibaba shareholdings. "I want to become the leader of the AI revolution," Son said at SoftBank's general shareholders meeting in June. The chairman has added many of the world's leading artificial intelligence companies to SoftBank's investment portfolio, a strategy he will move forward with and for which SoftBank's Alibaba shareholdings will be essential.

SoftBank has yet to recover what it has invested in other target companies, but there are signs that the SoftBank Vision Fund, which manages about $100 billion, could start to recoup money in the not-too-distant future. Slack Technologies, which operates a workplace chat tool, and Uber Technologies recently listed on the New York Stock Exchange. The We Company, which operates office-sharing company WeWork, and food delivery service DoorDash plan to list in the near future.

SoftBank also plans to set up a second Vision Fund.

On the negative side, SoftBank Group subsidiary Sprint, a slumping U.S. communications company, continues to have difficulty sealing a merger with rival T-Mobile US. Authorities from a number of American states have filed lawsuits to stop the merger. Meanwhile, Arm Holdings, a British semiconductor maker that SoftBank bought for 3.3 trillion yen in 2016, is hardly ready to return SoftBank's investment.

SoftBank clearly relies on Alibaba, which accounts for nearly half the value of SoftBank's 26 trillion yen in shareholdings. Its fate hinges on finding another Alibaba before its current genie stops granting its wishes.