TOKYO -- The strategy deployed by SoftBank Group's Vision Fund -- in which it invests billions in disruptive technology companies, who can then outgun the competition -- is facing a harsh reality: Instead of being forced to retreat, key competitors are stepping up the pressure on the fund's flagship investments across Southeast Asia, China and the U.S.

"In our industry, winner takes all," SoftBank CEO Masayoshi Son said last March at the Milken Institute symposium in Tokyo. "By probability, the No. 2 company's [chance of] succeeding is very low."

But rivals appear to be defying the odds in ride-hailing, where the near $100 billion Vision Fund has made the biggest bets. Indonesia's Go-Jek is taking on SoftBank-backed Grab across Southeast Asia; Meituan Dianping is moving in on the fund's Chinese player, Didi Chuxing; and in the U.S., Lyft is fighting back against one of the group's highest profile investments, Uber Technologies.

SoftBank's portfolio companies may not have lost their market-leading positions. But the stiffening competition raises questions over how effective the strategy is as SoftBank prepares to launch a second $100 billion Vision Fund, and whether the group will need to pump billions more into its investments to maintain the lead.

"There is a limit to the money that SoftBank can supply," said Nikhil Kapur, partner at Strive Ventures, a venture capital firm that invests in early-stage startups. "Both Grab and Go-Jek are at already at a scale any other company will not find. Both can be successful."

"Having more capital is a huge advantage," said one industry veteran. "But there are cases where giants came in and lost to domestic ones who were less well funded. The question is: is [Son] backing the right company?"

The Vision Fund has poured some $3 billion into Singapore-based Grab, Southeast Asia's largest ride-hailing company, including a $1.5 billion commitment in March.

But its main competitor, Indonesia's Go-Jek, has not held back. Instead, it launched an expansion drive in Southeast Asia and is now competing with Grab in several overseas markets in both ride-hailing and food delivery. Nadiem Makarim, CEO of Go-Jek, recently told the Nikkei Asian Review that it is considering entering Malaysia, where Grab first launched its taxi booking app in 2012.

"I can't find that many companies that have been killed by SoftBank-backed companies," Makarim said. "There is always that second player that is supported by everybody else." Go-Jek is backed by Google, Tencent Holdings and U.S. private equity firm KKR, among others. According to App Ape, an analytics service offered by Japanese data provider Fuller, monthly active users of Go-Jek's app in Indonesia have been greater than those of Grab since November 2018, when it began collecting comparable data.

Its domestic lead may have encouraged Go-Jek to challenge Grab overseas. Grab became the dominant player in many Southeast Asian markets after it bought regional operations from Uber Technologies, the U.S. ride-hailing giant, in March 2018. The Vision Fund is also the biggest investor in Uber.

Competition is brewing in other markets. Meituan Dianping, which runs China's largest food delivery app, in April launched an "aggregated" ride-hailing service in which users can book third-party car-hailing services like the car-hailing arm of Shouqi, CaoCao Car, and Ucar through Meituan's app. It aims to use the massive traffic from its food delivery service to attract customers, without having to burn cash to sign up drivers or passengers.

Integrating small players into a single, popular platform may threaten the dominance of Didi Chuxing, which bought Uber's China unit in 2016 and now operates in some 400 cities. The Vision Fund has invested $6.8 billion in Didi.

Ride-hailing will "enhance user stickiness and provide opportunities for cross-selling of other services," said Wang Xing, Meituan Dianping's CEO, at a recent earnings call. A Meituan spokesperson said Didi can even become a partner.

The Vision Fund has invested $7.7 billion into Uber, which continues to battle Lyft in the U.S. Uber had around 21 million monthly active users in the country in May, while Lyft had about 15 million, according to App Ape. The gap has remained roughly the same since January 2018. The Vision Fund has itself fueled competition between its portfolio companies as they expand into new markets.

Uber faces competition in Latin America, one of its fastest-growing markets, from Didi, which is seeking growth outside China. The Chinese company last week announced the launch of its ride-hailing services in Chile and Colombia.

In a recent conference call, Uber CEO Dara Khosrowshahi noted that competition had "come in more recently" to the region.

Son unveiled the Vision Fund in late 2016 to transform his company into an investment holding company with a network of leaders in artificial intelligence. To achieve this, he has taken a radically different approach from the conventional business of startup investing.

A typical venture capital fund buys small stakes in a variety of startups, and profits by selling them at a higher price when they become more valuable. A successful fund will typically have a few profitable investments that cover losses from a larger number of unsuccessful ones.

In contrast, the Vision Fund deploys what one executive describes as a "kingmaker strategy." It buys a large stake worth at least $100 million in industry leaders, most of them at a "unicorn" -- $1 billion or more -- valuation. The theory is that by investing a significant amount of capital into a single company in a capital-intensive industry like ride-hailing, its competitors will struggle to keep up.

With a bigger market share, the company will be able to dominate the flow of data from users, which they can use to improve pricing and service quality using artificial intelligence. Son believes AI will be smarter than humans in a few decades.

Ride-hailing companies are "a pure example of using AI as a power, as a tool for disrupting the traditional transportation industry," he said. "Among our family we have 90% market share of all ride-share businesses. If that industry takes off, we win. That's the simple strategy."

In two years, the Vision Fund has poured $26.5 billion into companies in the transportation and logistics sectors as of the end of March, representing 44% of its total. 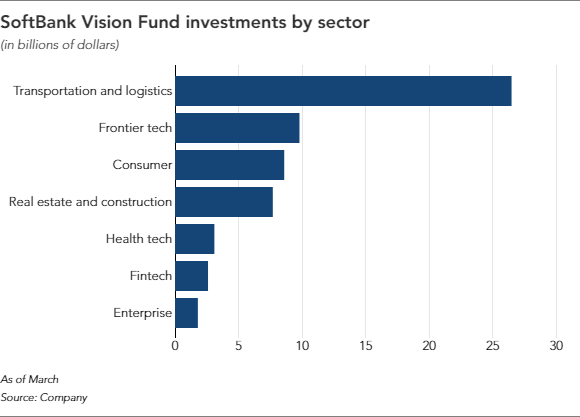 In Southeast Asia, some observers say the looming presence of the Vision Fund has created a difficult capital-raising environment for smaller startups.

Grab's aggressive expansion into new services "scares late-stage investors from investing in a business model which may directly compete against a particular team or arm of Grab," said Kapur of Strive Ventures.

There have also been concerns about the fund's ability to generate steady returns, given the largely unrealized investments. Son has brushed off these concerns. In early May, he announced a stellar 29% internal rate of return on investment for external investors. He went on to declare the preparation of the second Vision Fund, on the same scale.

"While still early in the process, the initial results seem to show that high returns with large amounts of money in late-stage investing is possible," said Chris Lane, an analyst at Sanford C. Bernstein, in a report on June 6.

But with most of the recorded gains still only on paper, and the disappointing initial public offering of Uber, the spotlight has turned on whether Son can achieve his long-term goal while pulling off profitable exits. Even small flaws in his strategy could be a blow.

Some investors believe there is still room for the competition to win.

"Go-Jek has tons of sources of revenue," said Xavier Gury, International Manager at French venture capital firm Via ID, an investor in Go-Jek. "It is better than Grab at capturing and retaining drivers because it has found ways to bring additional revenue."