TOKYO/NEW YORK -- The U.S. Department of Justice on Friday said it will approve the $26 billion merger of SoftBank Group-owned Sprint and T-Mobile US, setting the Japanese-owned carrier on the road to recovery and offering SoftBank Chairman Masayoshi Son leeway to take on risky but potentially rewarding investments in cutting-edge tech.

The Justice Department and attorneys general of five states reached a settlement with T-Mobile and Sprint regarding the proposed merger, with the two carriers agreeing to the divestiture of Sprint prepaid businesses including Boost Mobile, Virgin Mobile and Sprint Prepaid to satellite television provider Dish Network, as a condition for regulatory approval.

These and other conditions in the settlement would "resolve" the department's "competitive concerns," the DOJ said in a news release.

The merger requires approval from both the department and the U.S. Federal Communications Commission. But with FCC Chairman Ajit Pai already giving the deal his blessing two months ago, the requirements will be met.

The merger plan was shadowed by over a year of regulatory uncertainty due to antitrust concerns. It got the thumbs-up this May from Pai, who called the merger a "unique opportunity to speed up the deployment of 5G throughout the United States and bring much faster mobile broadband to rural Americans." T-Mobile and Sprint had a combined customer base of 135 million in the first quarter of 2019.

Under an April 2018 agreement, the merged entity will be controlled by T-Mobile parent Deutsche Telekom. SoftBank, which now owns 84% of Sprint, will have a stake of only 27% in the new company, making it an equity-method affiliate.

This also means that Sprint's roughly $40 billion in debt will no longer be consolidated in SoftBank's balance sheet, helping to slash the group's total debt by around 30%.

Son says he spends 97% of his time on the nearly $100 billion Vision Fund, which began investing in the world's biggest technology companies about two years ago. SoftBank has committed nearly $30 billion of its own capital to the fund and has also announced the launch of a second Vision Fund. 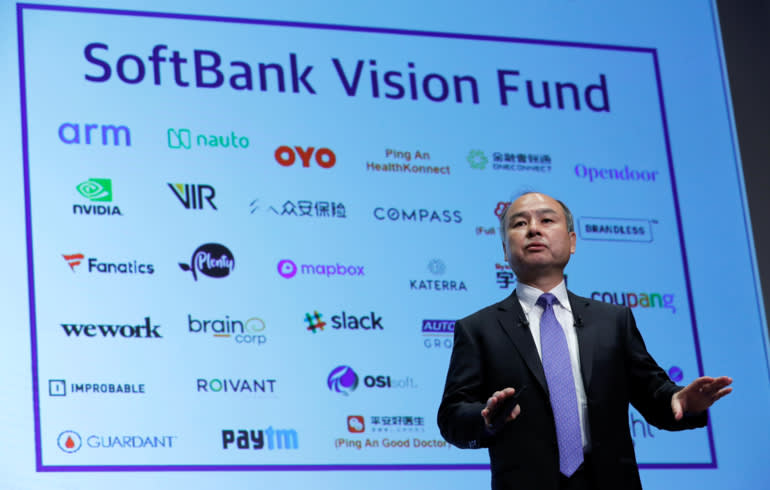 Established in 2017, SoftBank Vision Fund has 80 investment targets, and a second fund is in the works.   © Reuters

The Justice Department's approval came as a major relief for SoftBank, which remains burdened by the liabilities and losses at Sprint even while reinventing itself as an investment powerhouse.

And even with the green light from the Justice Department and the FCC, more than a dozen other states and the District of Columbia are suing in federal court to block the deal and can still "kill it," according to Tim Wu, a Columbia University professor specializing in antitrust and communications law.

SoftBank spent roughly $20 billion to buy Sprint in 2013. At the time, the Japanese tech company saw the deal as a strategic acquisition aimed at expanding its wireless business overseas. The acquisition would make SoftBank the world's third-largest carrier, Son said at the time.

A merger with T-Mobile had been part of the plan almost from the outset, as Sprint was seen as unable to compete on its own against top two U.S. carriers Verizon Communications and AT&T. SoftBank had wanted it from the day it bought Sprint, Son recalled at the group's general shareholders meeting in June. 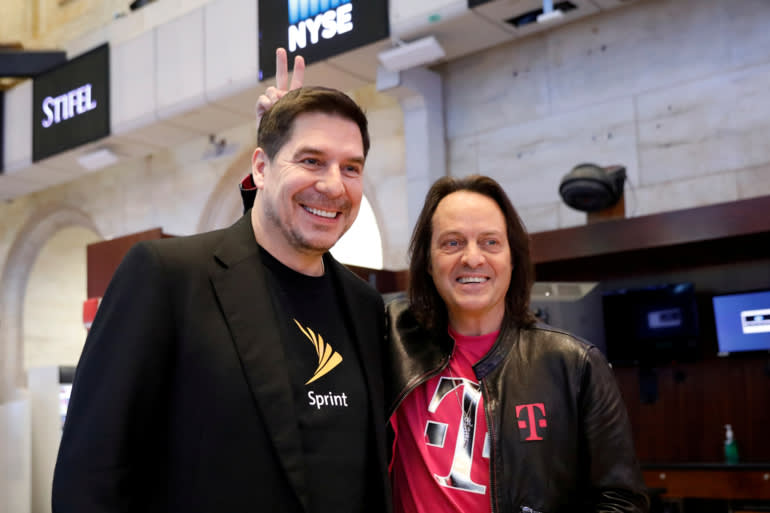 The two sides quickly entered into negotiations, but momentum stalled after two rounds of talks. The idea was scrapped in 2014 after the FCC expressed opposition over competitive concerns. Negotiations resumed in 2017, only to hit a wall when both SoftBank and Deutsche Telekom demanded control.

As the hoped-for merger failed to materialize, Sprint struggled. It was losing money before its acquisition and kept posting net losses for years afterward. It climbed into the black in fiscal 2017 but sank back into the red the year after that. As rivals were adding customers, Sprint was losing them, owing at least partly to its inferior network.

The start of the 5G infrastructure rush, in which Sprint lacked the financial wherewithal to compete, drove SoftBank to finally drop its demand for control, leading to last year's agreement. The companies laid out plans to invest $40 billion in a 5G network. For SoftBank, this represents a big step toward casting off the Sprint albatross.

It also means that the technology conglomerate no longer has to fear a worst-case scenario where it could have been forced to pull out of its Sprint investment entirely.

SoftBank has no obligation to cover Sprint if the unit cannot repay debt -- specifically, nonrecourse loans. This would have protected the parent if Sprint went under, but SoftBank might still have had to consider abandoning the carrier in that case.

"We took out nonrecourse loans, even if the interest rate was higher, in case the Sprint and T-Mobile merger didn't happen," a SoftBank insider said. SoftBank Chairman Masayoshi Son has transformed the group from a telecom operator to an investment company.   © Reuters

The deal will also help make Sprint a more comfortable fit with this new direction. SoftBank limits its stakes in artificial-intelligence-related companies to between 20% and 40%, a level that lets their leadership retain independence while still allowing for synergy among investees.

The conglomerate follows this rule for nearly all of its major group companies, aside from chip design house Arm -- acquired in 2016 as a keystone of its AI strategy -- and wireless carrier unit SoftBank Corp. The Sprint stake, which predates this policy, is now an exception to this rule, but the merger will bring it in line with the rest of SoftBank's portfolio.

But the merger still marks a bitter compromise for Son, who had earlier sought to maintain control of Sprint. The company's stock had traded below the $7.65 SoftBank initially paid in 2013.

The merger between T-Mobile and Sprint will likely "narrow" SoftBank's valuation discount, said Arun George, an analyst at Global Equity Research, as a merger with T-Mobile will greatly increase Sprint's chance of becoming a self-sustaining business, "freeing SoftBank to redeploy its capital for potentially more attractive opportunities."

SoftBank's shareholdings are valued at roughly 22 trillion yen ($200 billion), excluding venture funds, but most of this comes from only a handful of companies, including a 20%-plus interest in Alibaba Group Holding worth 14 trillion yen. Diversification will be a major challenge going forward.

SoftBank's stake in Sprint is currently worth about 2.8 trillion yen, giving the company about 757 billion yen in unrealized gains.