Sony feels it has immersed itself in a virtual shoo-in

TOKYO -- Sony is getting ready to join the virtual reality revolution. The iconic company that brought us the Trinitron, the Walkman and PlayStation is preparing to release a VR-based game system in the first half of 2016. 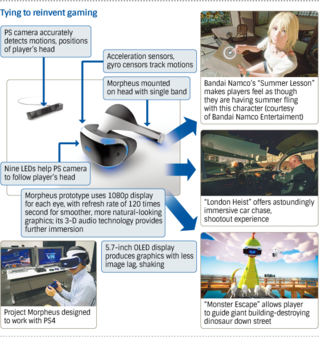 With the Morpheus, Sony is aiming beyond the gaming business. It will position the headset as a platform for movies, music and other entertainment and informational tours.

The company is also set to use VR technology as the foundation of a new business model that is not dependent on game machines for profits.

What does all this mean? Simple. Sony is reinventing its 21-year-old PlayStation business.

In fact, it might not have a choice in the matter: Sony Computer Entertainment is already frequently visited by Hollywood executives.

The Tinseltown guys make pilgrimages to Sony's video game unit to get a glimpse into the future of filmmaking and obtain some hints as to how to use VR technology to enhance their movies' visual effects and expressions.

"We receive a flood of inquiries," said Shuhei Yoshida, president of SCE Worldwide Studios, who is leading the development team. "VR is the 'it' thing among creators."

The Morpheus is a VR headset designed to work with the PlayStation 4. Worn like night-vision goggles, the display makes players feel as though they are immersed in a game's universe, rather that sitting on a couch or merely flicking a motion controller.

It does this with cutting-edge imaging, audio and censor technologies.

The Morpheus booth set up at this year's Electronic Entertainment Expo, the world biggest video game trade show, held in Los Angeles in June, was thronged with visitors anxious to wrap a virtual world around their brains.

Players who tried the prototype and the 18 games that were available exclaimed at the amazing effects.

Already, more than 20 companies are developing games for the Morpheus.

Andrew House, president and global CEO of SCE, has been stressing that the Morpheus will not only revolutionize gaming but has the potential to become a medium unto itself.

Think of the Morpheus as being Sony's answer to: "What should a next-generation media platform do?"

SEC has already brought executives from Sony Music Entertainment and Sony Pictures Entertainment on board to talk about how these group companies might be able to make content for its coming VR headsets.

Imagine stepping into the scene of a movie you're watching or listening to your favorite music as though it were being performed in Boston Symphony Hall.

Until now, SCE has expanded the PlayStation ecosystem by working with game developers. With VR, it intends to get as broad a range of creators as possible involved in developing new uses for the technology.

SCE has even fielded Morpheus-related inquiries from the retail and other service sectors. A major automaker is also showing strong interest in the Morpheus. Many of these businesses are interested in whether the headset can be used in showrooms or for in-store product demos.

Today, a typical simulation system for business-use can cost as much as a house. The Morpheus can drastically lower these costs. As such, it has the potential to revolutionize how product demos are carried out.

A lot of VR platforms are just now coming out. Google Cardboard is already available for about $5; it works with just about any smartphone. The Samsung Gear VR sells for around $200 but only works with other Samsung hardware. The HTC Vive is due out by the end of the year. And Facebook's Oculus Rift, which has generated huge amounts of excitement, should follow in the first quarter of 2016.

Huge advances in graphics processing technology that has made it much easier for creators to develop VR products is responsible for all this activity.

But VR itself is nothing new. Parts of the game industry got caught up in the technology in the 1990. Sega developed the Sega VR, a head-mounted game system to immerse players in an artificial gaming environment. And Nintendo rolled out the Virtual Boy in 1995. But low-res images and high prices kept these systems from catching on.

Now, game industry executives and pundits are saying 2016 will usher in a new age of VR gaming.

The companies listed above are all hoping their platforms to become the industry standard. SCE sees the Morpheus' edge coming from its compatibility with the PlayStation4, which has surpassed the 20 million sales mark faster than any of its predecessors.

"The thing (about the Morpheus) is the connection with the PS4, a household game machine," Yoshida said.  "Anybody, whether they know about technology or not, can easily enjoy the experience."

The Oculus, it is said, will require its users to have a high-powered personal computer, one that could cost $1,500, or some other pricey device.

House stressed that while VR is an emerging platform open to all kinds of content creators, games will steer it onto the main street of consumerdom.