TOKYO -- Sony reported record profits for the April-December period on Friday but cut its revenue outlook for the fiscal year, due mainly to weaker-than-expected sales of cameras and smartphones.

The new warning adds to concerns over the successor to its aging PlayStation 4 console, which has been the main driver of Sony's profit growth.

Operating profit for the nine-month period rose 14% from a year earlier to 811 billion yen ($7.44 billion) on a 1% fall in revenue to 6.53 trillion yen. The rise was driven by booking a one-time profit of 116 billion yen from its stake in EMI Music Publishing, which it acquired in November.

The company's gaming division has been buoyed by hit software titles like "Spider-Man" and "God of War" while its growth in the paid subscription service PlayStation Plus, which has more than 36 million subscribers, also helped boost business.

However, sales of PlayStation 4, which was released in 2013, have been slowing. For the three-month period through December, the company's gaming business recorded a 14% drop in operating profit due to the console's slump. 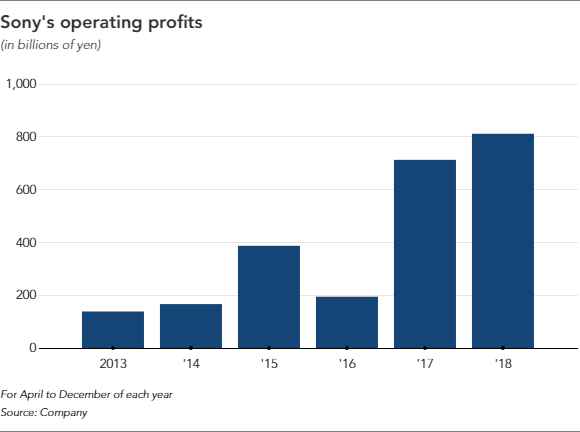 Chief Financial Officer Hiroki Totoki said at the company's earnings briefing that "although sales are slowing, the results are what we expect for a console in its sixth year."

Hideki Yasuda, senior analyst at Ace Research Institute, expressed his surprise, saying "I think many analysts were expecting better earnings for the gaming business with the help of its software sales -- certainly not a decrease in profits."

Meanwhile, weak smartphone sales continued to weigh on overall earnings. Sony cut its revenue outlook for the year ending March by 200 billion yen to 8.5 trillion yen, down 0.5% from the previous year, as it expects smartphone sales in Japan, Europe and Southeast Asia to be weaker than expected. The company also cut its forecast for image sensors and compact digital cameras.

Totoki expects "the harsh business environment for the smartphone market to continue for some time," due to China's slowing economy and geopolitical risks weighing on the global economy.

The company kept operating profit on track to hit a record high for the second consecutive year. Outlook for net profit was upgraded by 130 billion yen to 835 billion yen, thanks to a tax benefit on its U.S. assets.

Sony shares are down about 20% since their year high of 6,973 yen in September, with investors already starting to anticipate income from the gaming unit to peak ahead of a potential launch of PlayStation 4's successor.

On Thursday, Nintendo announced that it had slashed its full-year forecast for the portable Switch console, forecasting sales of 17 million units in the year ending March from the previous estimate of 20 million.

Heightened investor wariness over the company's future earnings led to a sell-off in shares, with Nintendo stock plummeting 9% on Friday.

"Investors could possibly react in a similar way to the slowdown of Sony's gaming business," Yasuda added.