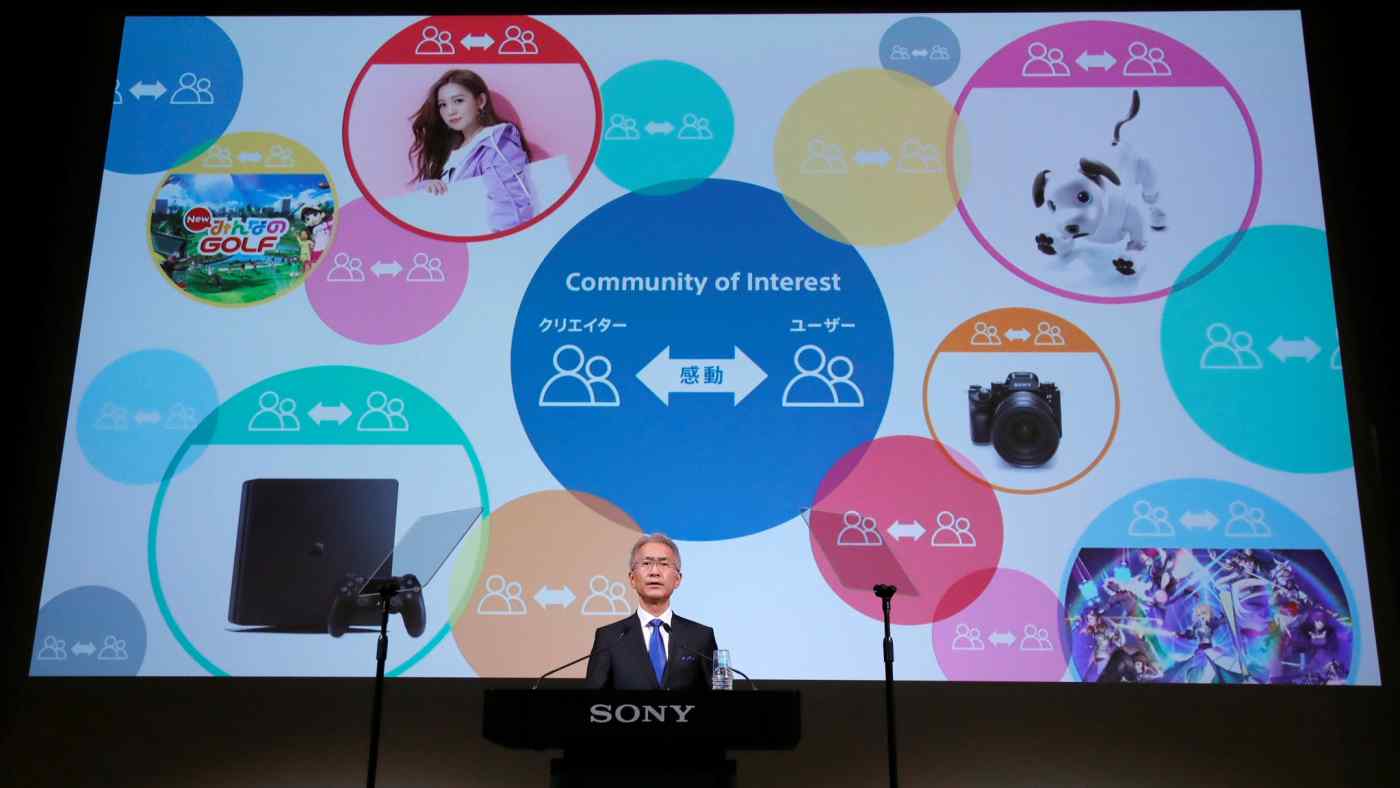 TOKYO -- Under new CEO Kenichiro Yoshida, Sony will seek to strengthen the recovery made under predecessor Kazuo Hirai by cultivating more reliable revenue sources and investing big in content.

"It was my decision to abandon [companywide] operating profit targets," Yoshida said Tuesday at his first press briefing since taking office in April. "Targets are important, but we have been swept up in achieving results in three-year periods," he said as the company released its next medium-term business plan.

Sony's 734.8 billion yen ($6.61 billion) operating profit for the year ended in March was its first record in 20 years, far outpacing the sevenfold jump to 500 billion yen targeted in the last medium-term plan under Hirai.

Although a rapid recovery in the semiconductor business helped generate better-than-expected earnings, among other factors, Yoshida sensed vulnerabilities.

In the past, Sony's earnings have fluctuated as a result of chasing short-term profit and market share goals. Howard Stringer, Hirai's predecessor, pushed a 5% operating profit margin repeatedly but the goal was never achieved. Sony also uses U.S. accounting standards, which include one-off gains in operating profit, making it hard to judge the company's competitiveness.

Yoshida said that the latest medium-term plan "doesn't really reflect [my] character." But he does appear to have left his mark. After years in the accounting department, he is working to show investors the company's earnings prowess rather than setting ambitious targets or trotting out slogans such as former President Nobuyuki Idei's "Digital Dream Kids."

The most important target will be operating cash flow, a measure of the revenue generated by normal business operations that excludes one-time gains. Stripping out financial services, the company aims to raise operating cash flow by 500 billion yen over the next three years to 2 trillion yen.

Profit ranges were set for the company's four main segments -- gaming, electronics, semiconductors and entertainment -- but three of those businesses may do worse in fiscal 2020 than in the year that ended in March. Total profit from the segments is expected to reach 638 billion yen on the low end, short of the 643.5 billion yen earned in fiscal 2017.

"Rather than profit growth, we will focus on raising profit quality by increasing the proportion of recurring revenue," said Yoshida. To that end, Sony on Tuesday announced it will buy DH Publishing, operator of EMI Music Publishing, for $2.3 billion in its second-largest acquisition ever. Sony Music Entertainment will buy an interest in the company holding the rights to the "Peanuts" franchise, which includes the popular Snoopy character.

Content like music and movies have global earnings potential now that streaming has gone mainstream. A roster of strong titles is key to these subscription services. Sony will also take a stake in the licensing company that holds the rights to the "Peanuts" comic and cartoon franchise featuring the popular character Snoopy.

The Tokyo-based company will also devote 1 trillion yen, half of its targeted cash flow, to capital investment for smartphone image sensors, in which it controls a high market share. It will also focus on pairing artificial intelligence with robots, such as its Aibo robot dog, and the medical field.

Although Sony possesses the basic technology in each field, it will take some time before these segments start contributing to profit. The company plans to concentrate on launching new businesses for long-term growth, investments that would be difficult to justify if profit targets were set for the fiscal years through March 2021.

But Sony's shares sank 4% on Tuesday to 5,188 yen as investors reacted to conservative profit forecasts for core segments. "Time will be needed for the market to evaluate the company's strategy for quality profit," said Masahiro Ono at Morgan Stanley MUFG Securities.

Even some within the company have had trouble warming up to Yoshida's approach. "I felt that the message was unclear," said one midlevel employee.