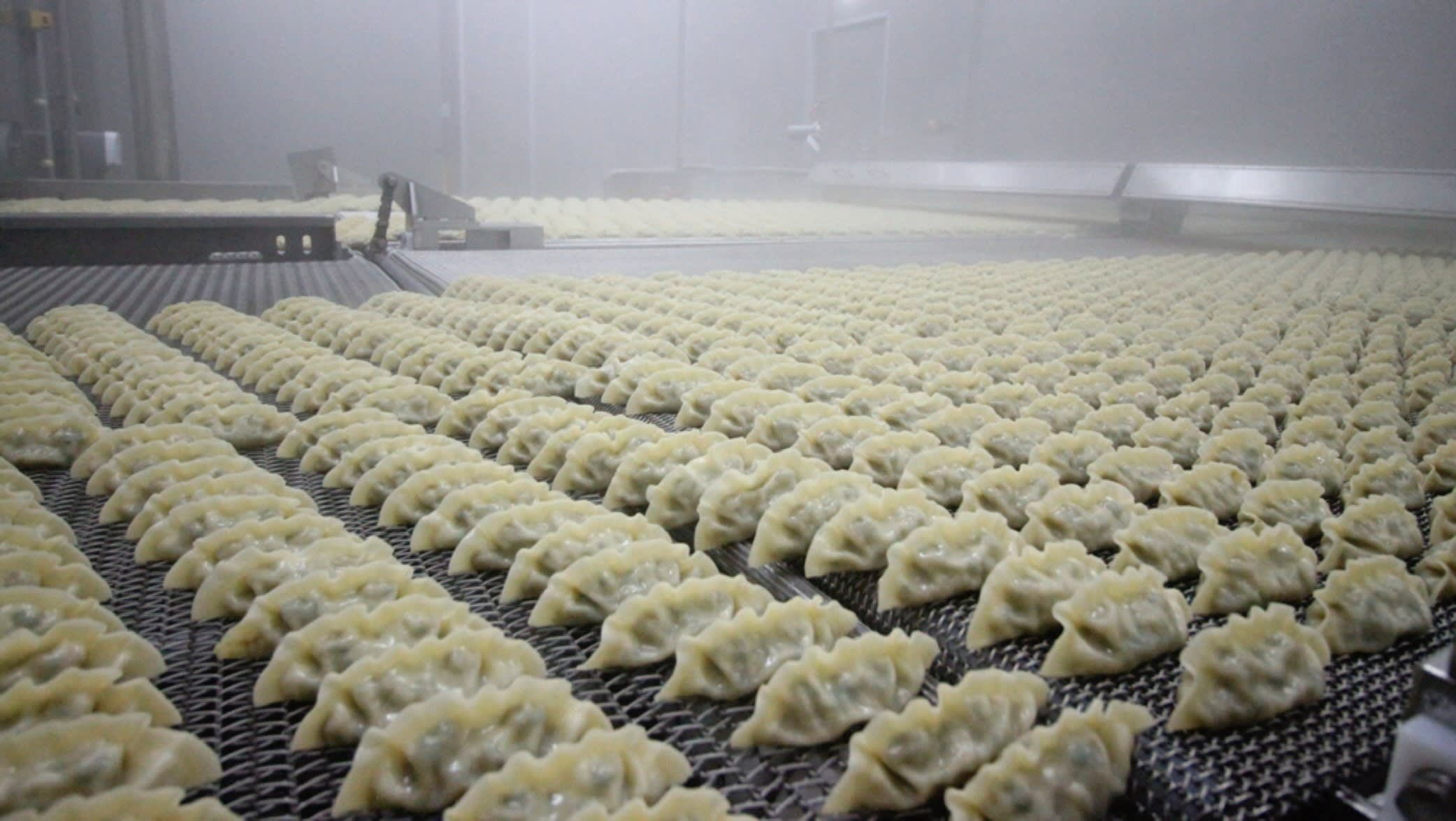 The company has gone on an acquisition spree in the U.S. and Asia, aiming to secure long-term growth by expanding beyond its domestic market of a little more than 50 million people.

The company is now the main supplier to the gyoza chain Naniwa Hitokuchi Gyoza Chao-Chao, which operates about 50 outlets across Japan, including Sapporo in the north and Naha in the southwest, and in some cities elsewhere in Asia.

The chain's hitokuchi gyoza (bite-size gyoza), filled with ground meat and vegetables, go well with beer and are popular in Japan.

In addition to frozen dumplings, CJ CheilJedang sells Korean gukbap rice soup and bibimbap rice bowls, all under the Bibigo brand. The company is also expanding sales of Korean seasonings.

Its Korean-style dumplings weigh 35 grams, nearly twice as much as ordinary Japanese gyoza. They are also popular as a soup ingredient. 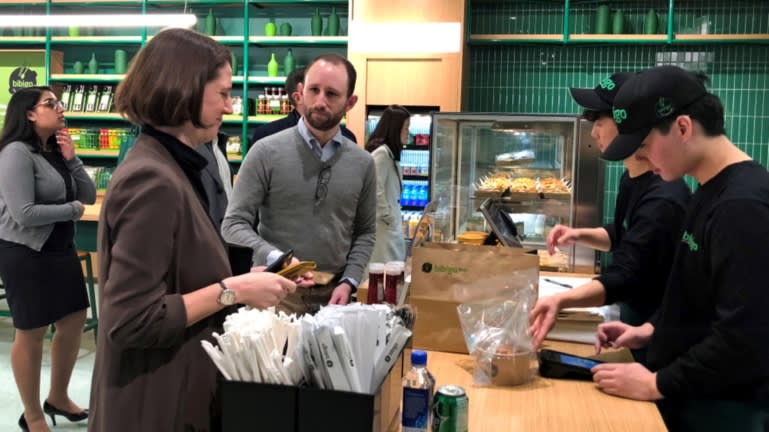 Customers are seen in this January 2020 photo at a limited-time-only delicatessen CJ CheilJedang opened inside skyscraping Rockefeller Center in the central part of New York at the end of 2019.

CJ CheilJedang's frozen dumplings have already been widely accepted in the U.S.

New York is a melting pot of foods from around the world. At the end of 2019, CJ CheilJedang opened a delicatessen in Rockefeller Center in midtown Manhattan.

The deli sells light meals such as dumplings and Korean box lunches such as bulgogi grilled beef and bibimbap. It attracts more than 200 customers per day, taking in nearly $5,000.

CJ CheilJedang says its vegetable-rich dumplings have attracted many deli customers who see them as a healthy food, with some buying them for lunch and others buying them for dinner on their way home.

Lying behind CJ CheilJedang's opening of the deli in such a prime high-rent location was its acquisition of major U.S. frozen food producer Schwan's in 2018 for $1.84 billion.

The purchase, its largest ever, gave it 17 food plants and 400 sales footholds across the U.S. plus a sales network to deliver its products to U.S. retail giants such as Walmart and Kroger.

Sales of frozen dumplings, CJ CheilJedang's flagship product, in the U.S. have already exceeded those in South Korea in terms of value. CJ CheilJedang established a foothold in New York to gain notice and thereby further expand its footprint across the U.S. market.

In addition to Japan and the U.S., CJ CheilJedang has also built sales channels in China, Europe and Vietnam through acquisitions or alliances with local companies.

While selling food products under the Bibigo brand everywhere, CJ CheilJedang is promoting their localization by adjusting ingredients and seasonings to local tastes. 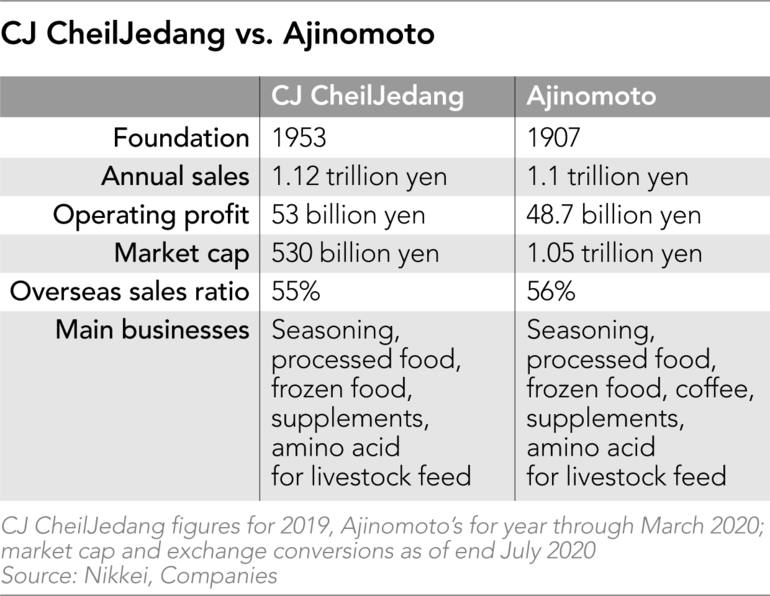 It is accelerating its overseas expansion drive through acquisitions as it faces a shrinking domestic market, following the same growth path as Japan's Ajinomoto.

Ajinomoto started as a manufacturer of umami seasoning but has diversified into areas such as processed food, frozen food and supplements and has strove to expand into overseas markets.

CJ CheilJedang started as a sugar manufacturer in Samsung Group and has expanded its businesses to include processed food, frozen food and amino acids for livestock feed.

Since becoming independent in 1996, CJ CheilJedang has cultivated markets in the U.S., China and Southeast Asia.

The two Japanese and South Korean food manufacturers resemble each other in both size and areas of business. Furthermore, they have a long intertwined history. 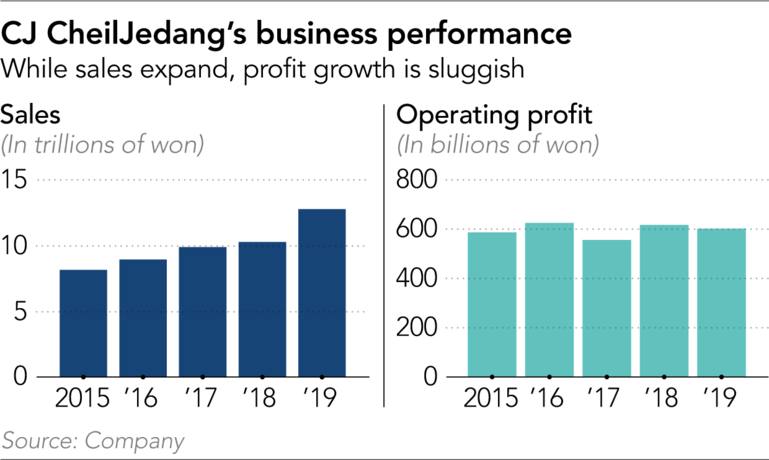 According to Samsung Group's corporate history, CJ CheilJedang learned how to produce monosodium glutamate, the main ingredient in umami seasoning, from Ajinomoto 50 years ago.

As things stand now, CJ CheilJedang may be on a par with Ajinomoto in terms of sales and operating profit but remains far behind its Japanese rival in terms of market capitalization.

To catch up, the South Korean company needs to come up with medium and long-term strategies to reap further benefits from its aggressive acquisitions.