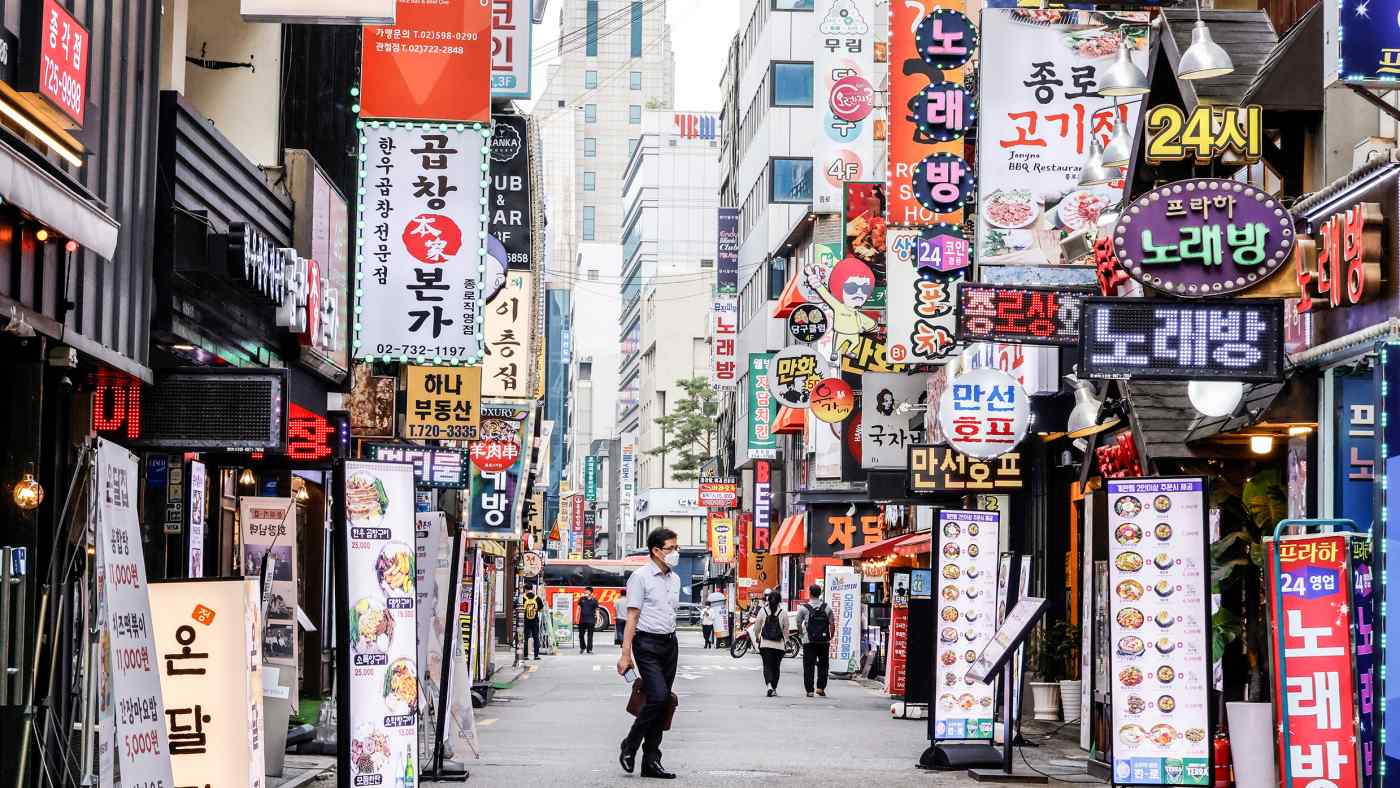 As in many countries, independently owned businesses in South Korea such as restaurants are bearing the brunt of policies aimed at limiting the movement of people to control the spread of the coronavirus.   © Reuters
STEVEN BOROWIEC, Contributing writerJuly 19, 2021 12:11 JSTUpdated on July 19, 2021 12:42 JST | South Korea
CopyCopied

SEOUL -- Coronavirus cases have surged to record levels in South Korea, resulting in stricter curbs that are pressuring small and midsized businesses already reeling from previous outbreaks and widening the performance gap between big companies and smaller domestic rivals.

While large South Korean enterprises have fared better than their overseas peers, the growing gap at home has smaller establishments worried.

The government has been supporting mom-and-pop shops with monetary handouts that have helped them weather the brunt of the COVID-19 crisis. It is also currently considering a supplementary budget of 33 trillion won ($28.7 billion) -- the third such package since the start of the pandemic. The spending includes loans to small businesses and vouchers to spur consumption.

Park Kyung-kuk has operated a restaurant in Seoul serving stews and fried rice dishes for the past five years. Since the start of the pandemic, he has tried to stay afloat by increasing deliveries but is still struggling with slumping sales and narrow profit margins.

The proprietor has received government support, but he is increasingly pessimistic and now pins his hopes on customers to provide a lifeline.

"At some point, the people of this country have to support our small businesses with things like tipping delivery drivers," Park said. "I don't think there's much the government can do to help."

South Korea on Wednesday of last week reported a record daily high of 1,615 coronavirus cases, as variants spread quickly among young adults even in the face of strict social distancing restrictions around the capital. The daily figure has subsequently eased somewhat, and the total number of infections stood at 179,203 with 2,058 deaths as of Monday.

Supply issues have hampered the country's mostly age-based vaccination rollout. So far, just some 30% of the population has had a single dose, while about 12% is fully inoculated.

South Korea's economy is dominated by a small number of giant companies and conglomerates that have leveraged their size and technical expertise to stay strong throughout the pandemic. Many of these have relied on exports to survive, and there are no signs that the current wave of infections will affect them much differently.

Steelmaker Posco logged its largest profit since 2006 in the second quarter while Samsung Electronics saw profits jump 53% on the back of brisk sales of memory chips, the demand for which has skyrocketed during the pandemic.

Meanwhile, fledgling e-commerce companies -- including delivery giant Coupang and Market Kurly, which has developed a niche in overnight grocery drop-offs -- have seen revenue soar due to higher demand for home deliveries. 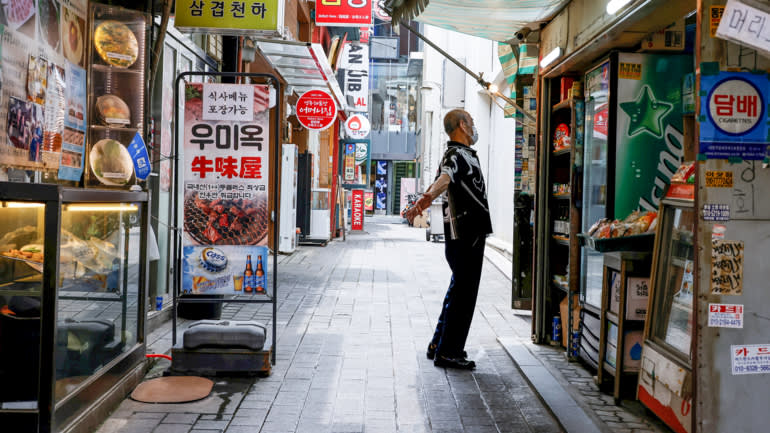 A shopkeeper stretches his arms in a lane devoid of customers in Seoul on July 9.   © Reuters

"E-commerce companies made huge investments and consumers adapted to new technology," said Munseob Lee, an assistant professor of economics at the University of California, San Diego. "This will further increase inequality between large-sized corporations and small and medium enterprises."

Lee added that services such as e-commerce and food delivery are dominated by big tech companies that wield enough clout to dictate prices. "This reduces the already-narrow profit margin on self-employment, which has been used as a last resort for the unemployed," he said. "This transformation is inevitable but faster than expected."

While the country's marquee players have fared well, the service and hospitality sectors, which were struggling even before COVID, have been hit particularly hard.

A study released this week by the Korea Economic Research Institute found that sales by independent merchants were down 78.5% in the first half of the year from the same period in 2020, with 58% of respondents attributing the decline to COVID.

Clothing and flower shops, restaurants, dry cleaners and hair salons were among the types of businesses most likely to report losses, and conditions are likely to worsen.

The government enacted a slew of strict social distancing measures on July 12 that will remain in place for at least two weeks. Under the new curbs, gatherings of more than two people are prohibited after 6 p.m., and restaurants, movie theaters and gyms must close by 10 p.m.

Mid-to-late July is South Korea's main vacation season, but authorities are encouraging people to stay inside and refrain from intercity travel, which will deprive the tourism and hospitality sectors of key earnings.

Merchant groups have accused the administration of President Moon Jae-in of bungling both the economy and the country's vaccination program, leaving them to pick up the pieces.

"For the past year and a half of the coronavirus, the government has just said 'wait' while independently operated businesses have been the constant victims of its policies to address it," Kim Ki-hong, head of a small business association, said at a news conference on Wednesday.

The merchants are pleading with the government to lift social distancing measures, saying that their livelihoods are at stake.

"We're enduring mounting debts and tears," Kim said, according to the mass-circulation Chosun Ilbo newspaper. "How much longer must we close our doors to stop corona?"