SEOUL -- As artificial intelligence becomes more and more prevalent in commerce and industry, one South Korean venture company is betting on the future of children's toys and games equipped with the technology.

AIBrain was founded in 2012 by CEO Richard Shinn, who saw huge potential in the future of AI. The company's target market is similar to that of SoftBank Group for its humanoid robot Pepper. 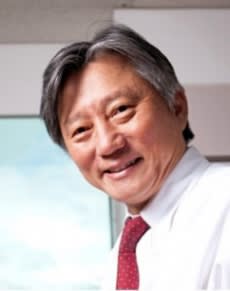 In March, the company is set to launch Tyche, an AI-equipped toy robot. Preorders are already being taken on its website and hundreds of sales are expected initially.

Tyche is a miniature car-shaped robot to which users connect a smartphone. Once the two are combined, a character appears on the screen which chats with the owner.

The devices, priced at $199, is designed as an educational toy, with applications such as language study and the technology it uses has earned global praise; it won innovation award at the Consumer Electronics Show in the U.S. in 2014.

According to Shinn, Tyche can exchange greetings and answer simple questions such as about the weather in the local area. The toy is currently available in English and Korean but the company plans to increase the number of language options.

AIBrain is also developing a smartphone-based AI game set in everyday life scheduled for release by the end of this year.

Before setting up AIBrain, Shinn had an information security company listed on the South Korea's Kosdaq market for startups. He said his company can now focus on development without having to worry about raising working capital for the next few years.