JAKARTA -- A glimpse of the future of health care that Kalbe Farma, Indonesia's largest pharmaceutical company, envisions can be seen in shopping malls, rather than hospitals. There, it is opening futuristic-looking outlets plastered with its trademark green logo. Staff offer consults free of charge and health checks for shoppers. Children can check out the play area while their mothers are examined.

"We want to provide not only for patients but also for healthy people," said Vidjongtius, Kalbe's president, who goes by one name, in a recent interview with the Nikkei Asian Review. "Because in general, 85% of people are healthy, that is where the opportunity is." 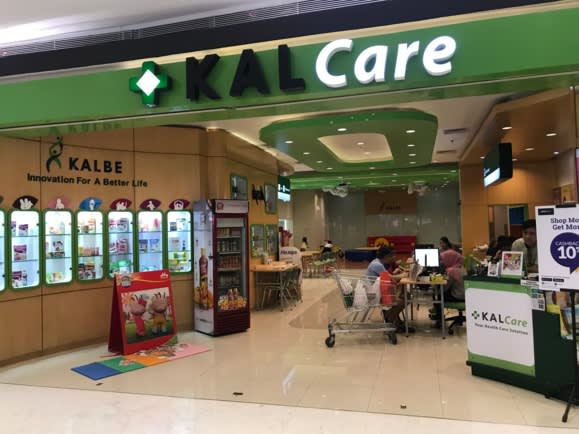 Kalbe has little choice but to remake itself amid falling margins at its mainstay prescription drug business -- the result of the government's universal health care program. That has fueled the growth of Indonesia's health care industry but has also pulled tougher competition into the country's crowded pharmaceutical market, leaving each of the 200 or so players with a thinner slice of the pie.

Kalbe already has a number of popular products aside from drugs, including its Morinaga brand powdered milk and Milna baby cereal. Its 2012 purchase of Hale International, a fruit juice company, and the launch of the Fitbar snack bar the same year demonstrated Kalbe's growing desire to appeal to the wider consumer market. The strategy has paid off:  Kalbe's consumer health and nutritionals divisions, which include over-the-counter drugs, energy drinks, powder milk and snack bars, among others, contributed 47% of the company's total revenue in 2016, up from 39% in 2011. 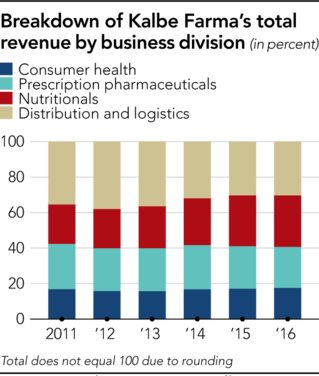 In the words of Vidjongtius, Kalbe is "designing a health ecosystem" in which the company guides consumers toward a healthy lifestyle. Kalcare is one example. Another is its recently launched Kalgen Innolab, a clinical testing laboratory in Jakarta that conducts blood, bacteriological and other tests for hospitals and clinics.

The move aims to tap the preventive health care market in which people monitor their health instead of going to hospitals only after they get sick. Run under a joint venture with Japanese trading company Toyota Tsusho and Yokohama-based clinical testing specialist Health Sciences Research Institute, Kalbe plans to equip the lab with advanced technology that can handle complex tests.

Since Boenjamin Setiawan and his siblings founded the company in a garage in 1966, Kalbe has used acquisitions grow into a mammoth. It had 19.37 trillion rupiah ($1.4 billion) in sales in 2016, making it the largest drugmaker in Southeast Asia. It holds an 11% share in Indonesia's fragmented pharmaceutical market and a nationwide distribution network covering nearly every hospital and 1 million retail outlets.

Yet, Kalbe sees transformation as essential to its survival.

The urgency stems from Indonesia's universal health care program. Launched in 2014, it expanded the government's previous health insurance schemes that offered free care to millions of poor households. The current program aims to cover the country's entire population of 260 million by 2019, giving all citizens access to affordable medical care, while subsidizing the premium payments of poor households. BPJS Kesehatan, the agency that runs the program, says 188 million people are currently enrolled. A worker at a Kalbe Farma plant in Cikarang, on the outskirts of Jakarta, grabs a fistful of tablets. Drugmakers are facing declining margins since the rollout of Indonesia's universal health care program   © Reuters

According to the Organization for Economic Cooperation and Development, Indonesia spends 3.1% of gross domestic product on health care, among the lowest of countries surveyed at similar income levels. Inadequate funding in the past left Indonesia with a massive shortage of doctors and hospitals. The universal health care program sparked a rapid expansion of public and private hospitals, a trend initially seen as a blessing for drugmakers.

But the reality was more complicated. The government is pushing hospitals to use cheaper generic drugs and has set price ceilings. Price hikes are rare despite a chronic funding deficit at PBJS. This is caused by the wide gap between the cost of treatments and the premiums patients pay. This has caused a squeeze at Kalbe and other pharmaceutical companies. Its gross profit margin at the prescription pharmaceutical division dropped from 61% in 2013 to 56% for the January to September period last year.

"If you only focus on generics -- supplying to government -- it's a low-margin business," said Vidjongtius. "In the future there will be more margin pressure, so we need to start to move into things like laboratories, health supplements and health care solutions." As a part of building its health ecosystem, Kalbe is rapidly branching into new markets. Some are niche products, such as traditional herbal drinks known as jamu -- which Vidjongtius said Kalbe will invest aggressively in -- and vitamins, which Kalbe moved into by setting up a joint venture with high-end Australian brand Blackmores in 2015. Other markets, like chips and snack bars, are larger but lack healthy options.

Transforming its business from specialist to mass market is key to fulfilling high investor expectations. With a market capitalization of about $6.1 billion, Kalbe is already more valuable than some of the country's top food and beverage companies, such as instant noodle giant Indofood Sukses Makmur ($5.3 billion) and confectionary maker Mayora Indah ($4 billion). Kalbe's price-to-earnings ratio hovers at more than 30X, reflecting a hefty premium compared with its competitors. Indofood has a PE-ratio of less than 20X.

Some analysts see pricing as a key challenge for Kalbe. Its snacks and drinks are more expensive than its less healthy competitors. Its new Fitchips, made from grains and whole wheat, cost more than twice as much as Lays potato chips. Given the recent slowdown in consumer spending in Indonesia, that will put it at a disadvantage. "Going into 2018, we continue to surmise that food items will outperform nonfood ones, and that the trend will aim for the low [average sales price] mass-market segment," BCA Sekuritas said in a research report in October. 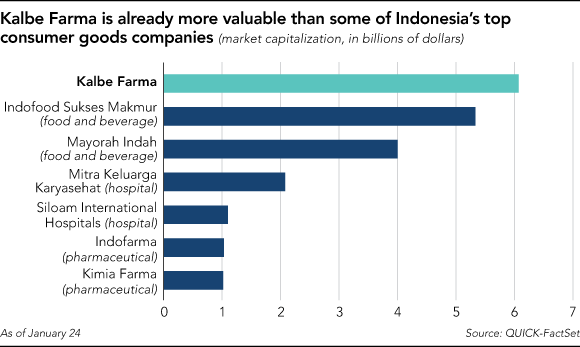 The competition is heating up in a number of areas. Sido Muncul, Indonesia's top jamu producer, acquired assets from a rival last year. Private equity group Saratoga Investama Sedaya bought a stake in the producer of another popular brand, Antangin. Analysts point out that Kalbe's own Bintang Toedjoe brand is still playing catch-up with rapidly expanding rivals.

Exports are a promising source of growth for Kalbe. At present they make up only about 5% of total sales. "Now we are providing health care solutions for people ... and [those] people can be Indonesians or in export markets," Vidjongtius said. In addition to Southeast Asia and Africa, Kalbe is expanding into the Middle East, where the "government-to-government relationship is very strong."

Another possibility is teaming up with popular foreign brands. "Everybody is happy" with the Blackmores joint venture, Vidjongtius said, and the company will "continue to build up our JV structure." He also hinted that similar deals are "still under discussion." Investors will be weighing in with their own prognosis.