TOKYO -- Square Enix Holdings is getting back on its feet, largely thanks to strong earnings from fee-based online and smartphone games, which the company has positioned as a main pillar of growth.

The video game company climbed back into the black in fiscal 2013, which ended in March, a turnaround from the group operating loss it incurred the previous year. The company's recovery is expected to gather steam if its overseas operations, including the release of a popular online game in China this summer, prove successful.

The 12th China Digital Entertainment Expo & Conference 2014, the country's biggest game fair, was held in Shanghai between July 31 and Aug. 3. Visitors to ChinaJoy 2014, as it is also known, flocked to Square Enix's booth to play the latest Final Fantasy installment, a massively multiplayer online role playing game. There was also a long line of people waiting for an autograph from Naoki Yoshida, a producer involved in the game's development.

The scene was a testimony to the progress Square Enix has made in using online games to turn its business around.

The company is best known for its Final Fantasy and Dragon Quest series. The Final Fantasy series has been praised for its compelling storylines, beautiful music and eye-catching graphics. More than 100 million copies have been shipped since the series debuted in 1987. The Dragon Quest series, meanwhile, is so popular that huge lines form in front of stores whenever a new version is released.

But the sophistication of home video game consoles has sent the cost of game development soaring. Development time has also grown longer and longer, it is increasingly likely that player preferences will change during the time from conception to release, making it difficult to recoup the millions of dollars invested in the game.

As the popularity of games for smartphones and tablet computers surged, Square Enix failed to keep pace. In fiscal 2012, the company logged its first group operating loss since it was formed in a merger between Square Co. and Enix Corp. in 2003. "We are missing various earnings opportunities," Yosuke Matsuda, president of Square Enix, said at the time.

This loss prompted Square Enix to step up efforts to reform its business model.

As the first step, the company began to shorten development time, allowing it to respond more readily to player requests and flexibly adjust and add content so that it could profit from the growing popularity of fee-based online and smartphone games. The effort resulted in "New Final Fantasy 14."

Square Enix added the word "new" to the title because it originally released "Final Fantasy 14" in 2010, but the title garnered widespread criticism. To protect the Final Fantasy brand, the company knew it could not afford another failure.

In developing the latest installment, Square Enix set up a bulletin board on its website to gather opinions from gamers about the original version. After receiving criticism that the game was dull and muddled, the company drastically simplified the content and made it more playable for all types of gamers. Square Enix also continued introducing major content updates for core fans. As a result, around 500,000 people around the world now pay to play the game. 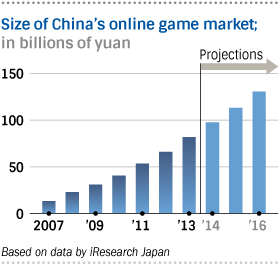 "For the original version, creators focused so much on the details that they failed to understand what players wanted," Matsuda said.

To further expand earnings, Square Enix is promoting operations in other countries, especially in China. While even the online game market is approaching maturity in Japan, China's is forecast to grow at an annual rate of 20%.

Square Enix plunged into the Chinese market with "New Final Fantasy 14" this summer by forming an alliance with Shanda Games, one of the country's leading online game operators. It aims to have nearly 1 million users in the near future.

Square Enix is also looking to smartphone games for growth. The number of people playing the smartphone versions of previously released games in the Final Fantasy and Dragon Quest series, as well as new games like "Schoolgirl Strikers," is increasing.

In particular, "Dragon Quest Monsters Super Light," a spinoff of the Dragon Quest series, was released in January and has been downloaded more than 7 million times, bringing in some 800 million yen ($7.6 million) per month. While its online and smartphone game operations are gaining traction, Square Enix is also stepping up its development of console games, as a hit in that segment can provide a huge earnings boost.

Daiwa Securities analyst Satoshi Tanaka said an increase in the brand power of Square Enix as a result of a hit product in the console game sector will help the company to promote a range of content, such as spinoff smartphone games.

"Final Fantasy 15" is one of the big console titles now under development and is expected to be released next year. The game is already drawing strong market attention, and analysts are forecasting price trends of Square Enix stock on the assumption that it and other games will contribute to the company's earnings.

At stake for Square Enix now is whether it can get its two core businesses -- fee-based online and smartphone games on the one hand and console games on the other -- working in tandem, with steady earnings through the new segment and a periodic windfall from the conventional one.