SILICON VALLEY -- Money and talent continue to gravitate toward Silicon Valley. Innovative startups sprout one after another. Yet some information technology analysts are worried: They say another dot-com bubble may be emerging.

The Nikkei spoke with Ben Horowitz, co-founder and general partner of influential venture capital firm Andreessen Horowitz, about what is going on in California's IT hub. Edited excerpts from the interview follow.

Q: What makes a successful startup CEO? Have the necessary qualities changed since you were leading Loudcloud, now Opsware, as CEO more than a decade ago? 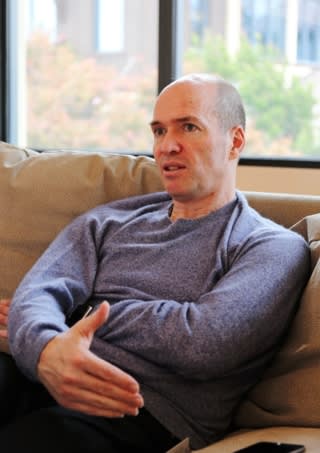 A: Well, a lot has changed. The big difference, the big change, has been to get, to build, a product has become a much more focused effort. In those days you would have to build the software, you'd have to test it in multiple environments. You would have to build a sales force, a professional service team, just to get the thing into market, right? All of that work had to get done. And so you just needed a tremendous amount of rigor across a lot of disciplines.

Today, [with Amazon.com's cloud computing service] AWS and a few guys with laptops, you can get into market. So I think what's happened is the CEOs are even more creative -- more intensely creative people -- than we were, and probably less operationally sound. And that's OK. That's probably the right balance, in this environment.

As the companies get big, they end up needing, I would say, more basic guidance. [Today's entrepreneurs are] younger too, because you don't have to master all those things.

Q: The funding environment must be quite different, too.

A: I think if you [look at] what was required 20 years ago, to be an entrepreneur, and what you'd have to come to the table with to get funded, it's a much different set of things than now. Much less experience in building, or even working in a company is required these days.

And, you know, it's one of the theories behind [our] firm. We kind of saw that coming. Our big observation on venture capital is [that the] firms were kind of designed to replace the founder with a professional CEO. The founder is the inventor, and would invent the product, and then you would bring in somebody who knew how to build a company to run it.

So, we thought, "Well, what if you could build a firm that taught the founder how to run his own company?" That would be a more appropriate firm for the modern world.

If you can have the innovator run the company, then the big advantage is you get more product cycles. Because, what happened almost uniformly in the 1980s, 1990s and 2000s is that professional CEOs never got to the next product cycle. They'd maximize the one they ran, and then end the company. So, we thought, "OK, we can create better companies, we can be a better firm, if we put in place the things that you need to learn how to run a company."

A: I don't think so. I think that's pretty impossible. If you're not an innovator -- there's very specific psychology to it. The problem with innovation is that it always starts out looking wrong, in that you have to go completely against convention. If it is something that everybody goes, when they see it, "Wow, that's a great idea!" then it's going to be massively competitive. Big companies will be advantaged, because they have way more resources.

So, an innovator almost always starts out with an idea that seems nutty or wrong at first. And so you start off heavily criticized because everybody's going to go, "What the hell are you doing?"

Q: In the book, you also talk extensively about the skills of "peacetime" CEOs and "wartime" ones. If you look at today's corporate leaders, who has both skill sets?

A: I think, for sure, [Facebook co-founder and CEO] Mark Zuckerberg. He's actually been quite impressive on that, when they've had to compete with MySpace or when he had to buy Instagram before Twitter.

Yet, there are parts of that company that he's just completely empowered people on, both on the product side and then what [Chief Operating Officer] Sheryl [Sandberg] is doing.

[Google co-founder and CEO] Larry Page, to some extent. I always felt that [Executive Chairman] Eric Schmidt had run Google almost entirely in peacetime mode, but when Larry [became CEO again], he did a lot of things ... that were extreme -- wartime, stylistically.

Those are the two famous examples that come to mind.

Q: Some are concerned about another IT bubble. Are you?

A: If you compare it to what happened in 1999, there are three really significant differences this time. One is, in 1999, the total number of people on the Internet was, maybe, 60 or 70 million, and then half of those were on dial-up. It was a very small market.

And the cost of fielding a product was still extremely high, so you had to buy some servers and AMC hardware and all that. And then the programming language -- the great advance in programming language that's occurred over the last 10 years, had not occurred. So, it was 10 times more expensive to build something, and then a hundred times more expensive to run it, and then you were addressing a market that was 50 to 60 million people.

Everybody saw the promise, so they all threw their money in. But the businesses just didn't work like that. They didn't work at all, really, a lot of them.

Now, [there are about] 3 billion people on the Internet. And it's in their pocket, so they've got it with them always. Not only are there way more people, but they're on way more.

And then, on top of that, in those days we were mostly selling technology products to technology companies. Now, if you think about any industry, whatever it is, you go: "OK, would I build the companies the same [way], if I knew that everybody had a supercomputer in their pocket, connected to a very high-speed network, with unlimited computing on the back end?"

For almost everything, the answer is no, be it insurance or taxicabs or hotels. That's really opened up the opportunity set, and created a lot of the momentum in the stock market and the private markets.

Those are reasons to believe that no, there's still room to grow.

On the other hand, we are seeing some weird stuff, like private market valuations [that] are actually higher than public market valuations, which doesn't seem sustainable. That's a fairly worrisome thing. ... The last four or five enterprise software companies that have gone public, went public below their private round -- that's a very new phenomenon.

The other thing that worries me a lot is the companies raising money privately are raising [it] from public market investors. And they're raising IPO-like amounts of money -- like $200 million, $400 million -- but with zero regulation. So you've got one world that's massively regulated, and you can get sued for almost anything, and then another world with no regulation and the same investors on both sides.

You just wonder if the prices ever go down, what's going to happen?

Q: Is Silicon Valley getting stronger? Or is IT innovation fanning out across the globe?

A: I think, in some ways, both. I think Silicon Valley is getting stronger. What are the companies worth $10 billion? Uber, Palantir, Dropbox, Facebook, Twitter, Airbnb. All those are in Silicon Valley, right? So, the number of gigantic tech companies being launched is still disproportionately [concentrated in] Silicon Valley. However, there are new, very important regions, with China being probably the most important. As the market is growing, there are others that are doing well. In the U.S., Seattle is probably the second best. And Israel, I think, is producing some strong companies.

But there are a lot of factors that make Silicon Valley very powerful. There is the huge concentration of the very best talent. If you're in anything that becomes a competitive market, you're very advantaged, talent-wise, to be here. ... There is [still] by far the most capital. So, if the cost of capital matters, then Silicon Valley is an advantage.

Culturally, the expectation among entrepreneurs here is that they're going to build something very important, whereas in a lot of other regions, they're happy to make a little money and that's it.

We're not worried about Silicon Valley ending. It kind of doesn't make sense for us to expand our focus beyond Silicon Valley because, as I said, there is so much great stuff going on here.