HONG KONG/TOKYO -- Renown, a century-old Japanese apparel maker that went bankrupt last month, is on the brink of full liquidation, as it struggles to find a new sponsor and could end up being split up into pieces by brands and subsidiaries.

Its former owner, Shandong Ruyi Technology Group, which held over 50% of shares in Renown at the time of the bankruptcy filing, is in dire financial straits as well. Its second-largest shareholder that was once regarded as its white knight recently pulled out, while the handling of its interest payment on its debt, which was due on Monday, remains murky.

Renown, established in 1902, ceased being a publicly traded company on Tuesday, after completing its final day of trading in Tokyo on Monday at 4 yen, or less than 4 cents. Listed since 1963, the company was one of the most renowned fashion brands in the country.

The Japanese company is in the process of selecting a turnaround sponsor under the trustee selected by the Tokyo District Court. Multiple business entities and funds appear to have participated in the bid, which closed last month. The winner is set to be determined later this month.

While waiting for a financial backer to emerge, Renown has been trying to secure working capital on its own. The company has solicited voluntary retirement from about 300 employees, a third of the group's workforce. The large-scale clearance sales of its flagship brands, including D'Urban and Aquascutum, have been resounding. Having gone under due to slumping sales, the company is now enjoying a 60% spike in turnover for the first two weeks in June compared with a year ago.

However, many observers told Nikkei that it could be difficult to find a sponsor that would enable the group to remain as a single entity with all brands intact.

"Renown's business model that depends on department stores was difficult to survive in the first place, and bankruptcy and inventory clearance sales damaged its brand," said a participant in the bidding. If remote work takes hold in Japan, demand for suits and other business apparel, which is Renown's bread and butter, could be hit further.

Renown's total debt at the time of the bankruptcy filing stood at 13.8 billion yen ($128.4 million). As creditors include its suppliers, Renown will find it difficult to solicit cooperation toward restructuring unless a certain amount of its debt is paid off, and to do that, Renown may need sell off its brands and subsidiaries piecemeal. The name Renown could be lost forever.

Shandong Ruyi Technology Group was in no position to rescue its former Japanese subsidiary as well.

The acquisitive conglomerate -- once hailed as the "LVMH of China" by some -- has been on a heavy buying spree of global brands and labels, on top of Renown, in which it first invested in 2010. The latest shopping list included Swiss shoe brand Bally, French luxury brand Sandro and British trench coat maker Aquascutum. It also controlled stretch fabric maker Lycra Co. and invested in Pakistani power assets. 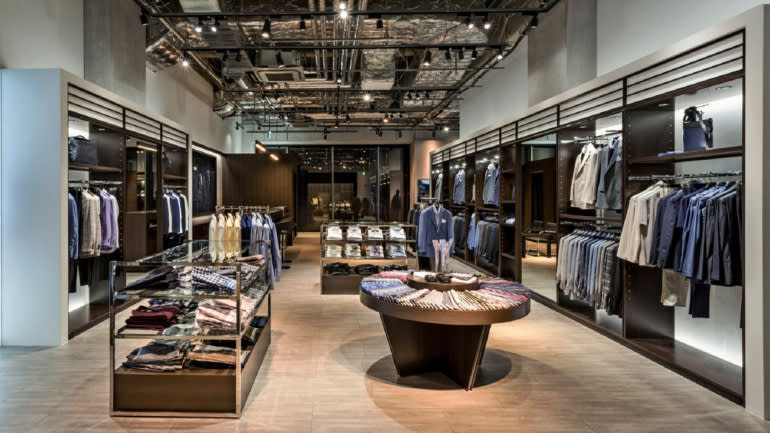 Renown is in the process of selecting a turnaround sponsor under the trustee selected by the Tokyo District Court.

But that left a deep scar on its balance sheet. Moody's Investors Service forecast in March -- when the agency downgraded the corporate family rating by two notches to Caa3, or a very high credit risk -- that the Chinese company's expected cash flow would be "insufficient" to cover its maturing debt of 11.5 billion yuan ($1.62 billion), bills payable of 5 billion yuan, and estimated maintenance capital spending of 100 million yuan until next March. The rating agency estimated the company faces 4.4 billion yuan of domestic bonds to mature or made puttable in the second half of this year.

Making matters worse for Ruyi, its new financial backer has recently backed down. Jining City Urban Construction Investment, the local government vehicle of the city in which Ruyi is located, said June 1 that it has rescinded its plan to acquire a 26% stake for 3.5 billion yuan and instead only retained a 0.01% stake worth one yuan. According to the latest available disclosure, Japanese trading house Itochu remains a major shareholder, with an 11.7% stake.

Adding to the woes is an interest payment of about 75 million yuan for its 1 billion yuan bond issued last year, which matures in March 2022. The payment was due on March 15, but creditors then agreed to extend the date by three months to Monday.

The company announced on Tuesday that three resolutions were unanimously passed at a bondholders' meeting held on Friday. However, the announcement published on the official website of Shanghai Clearing House stopped short of what exactly was being agreed upon.

The company, three lawyers who signed the legal document, and three bankers from the financial institution who called the meeting did not respond to requests to disclose the content from the Nikkei Asian Review.

The status of the bond is uncertain, but the bid price stood at 53.302 yuan as of Tuesday, which is about half its face value of 100 yuan.

Moody's did not provide comment from its analyst. S&P Global Ratings withdrew its junk-status rating on Ruyi's debts in December, while Dagong Global Credit Rating, a Chinese agency, also retracted its "AA-minus" ratings in March, both upon the company's request.

The latest financial standing of Ruyi is only available as of last September. The company has been pushing back the disclosure of its annual results for last year and the first quarter this year, which was supposed to be released before the end of April. In its announcement on Monday, the company said the financial disclosure would be made before the end of the month.

The delay was due to the influence of the novel coronavirus, but it stressed the "ordinary operation of the company has not been influenced."