Strike teaches Sony lesson on perils of restructuring in China Workers at Sony Electronics Huanan in Guangzhou staged a two-week strike to protest a change in the plant's ownership. (Photo by Yu Nakamura)

GUANGZHOU -- With less than a month to go until Dec. 25, it is unlikely that Sony is feeling much Christmas cheer. In the midst of the busiest shopping season of the year, the Japanese company has had to pay a hefty amount in "compensation payments" to workers in China to end a two-week strike at a key production plant.

And while the open unrest may be over, the outlook for restarting operations at the plant in full, located in the economic hub of Guangzhou, in southern China, remains murky. Even more troubling, Sony's agreement to make payments it was not legally obligated to may set a dangerous precedent for other foreign companies operating in the country.

Sony has enjoyed an excellent reputation in China in recent years, which only makes the recent trouble all the more surprising.

The strike was triggered by a somewhat puzzling press release issued by Sony's head office in Tokyo on Nov. 7 announcing that the company is selling Sony Electronics Huanan, its wholly owned subsidiary, to listed Chinese company Shen Zhen O-Film Tech for $95 million.

Sony Electronics Hunan, one of Sony's larger plants, produces a key component in smartphone cameras and is a major supplier to Apple. According to Sony, its sale reflects the company's "ongoing focus on optimizing the scale of the camera module business."

At first glance, the press release appears to be nothing more than a run-of-the-mill announcement of a restructuring decision. The stock market reacted favorably, sending Sony shares temporarily up 1.4% on Nov. 8 from the previous day's close. The same day, shares of O-Film, which produces such products as touch panels for mobile devices, jumped 7.4% to a year-to-date high of 41 yuan in intraday trading, possibly reflecting expectations for improved operational management at O-Film, in addition to the acquisition of advanced camera component technologies the company has been pursuing.

A closer reading of the press release, however, reveals an important difference.

Though it states that Sony and O-Film "signed a binding definitive agreement" on the sale of the plant, there is no reference to the date on which it will take place.

In usual negotiations, companies do not reach an agreement on the sale and price of an asset without setting a date for that sale. This is because no company offers a buying price for an asset before the seller has decided when to sell it.

There may be special circumstances for deals in China, as Sony and O-Film said the sale will be subject to regulators' approval and other conditions. For deals of this kind, however, listed companies usually give at least rough dates for their completion.

Sony made a similar announcement but in a different manner a week earlier. On Oct. 31, the company said it had signed a binding definitive agreement to sell its battery business to compatriot Murata Mfg., an electronics components maker. The announcement stated clearly, for the sake of investors, that the deal is planned to be completed by early April 2017.

Regardless of the reasons, the failure to set a selling date for Sony Electronics Huanan triggered unexpected trouble for Sony. Not being told when the sale will take place, Chinese workers naturally grew anxious.

Their unease reached a boiling point on Nov. 10.

Employees, mostly those in their 20s, suddenly began making a scene at the normally quiet plant, situated in a leafy Guangzhou suburb. "We've never heard of the sale!" they shouted. "We want our jobs protected! We demand compensation payments!"

They began leaving production lines and gathering around the front gate of the plant, blocking it completely. Shipments to Apple became impossible.

The strike occurred during the busy pre-Christmas season, with workers surely aware that it would deal a serious blow to Sony. Clashes between strikers and police resulted in injuries, and 11 workers were arrested.

The trouble did not end there. From Nov. 16, workers walked out of their workshops, gathering in the cafeteria, the yard and other places on the plant's property. A large number of police officers were mobilized around the plant to make sure the situation did not become dangerous.

Because a Chinese company will take over the plant and its employees under the deal, Sony is not required under Chinese labor contract law to pay any compensation to the workers. 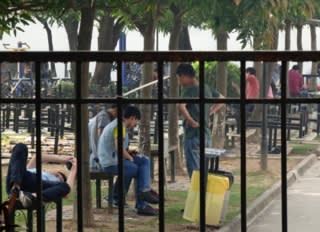 But the workers had Sony in a corner: As the walkout wore on and the plant's operations began to suffer, Sony gave in and proposed a settlement. It could not afford for the plant to remain idle any longer.

Specifically, Sony promised to pay all workers in full for the two weeks of work they had missed, plus up to 1,000 yuan ($145) each to return to their jobs, a sum roughly equivalent to half the base monthly salary for young workers.

"I wanted money so badly," a 26-year-old worker said. "I didn't want to end the walkout, but I'm satisfied with the proposed compromise."

The roughly 4,000 employees began returning to work on Nov. 25. While the conflict seems to have been largely resolved, Sony's corporate headquarters claims it was the result of negotiations but "without any economic compensation."

The price Sony must pay is not limited to the settlement. Because all the lines at the plant were halted for two weeks, "it will take much time to fix the equipment before it can be restarted," an official at the plant said, speaking on condition of anonymity. "We have no idea when we can restart the plant in full."

Concerns over product delivery are palpable, as Apple officials were seen hurriedly entering the plant on the day workers returned to their posts.

The plant is also likely to suffer from the rift that the walk-out has created between the management and workers. "We've returned to work, but we are banned from coming close to equipment," a worker in his 20s said. "Japanese [management] probably think we would destroy equipment. They don't trust us Chinese workers."

Japanese workers are busy inspecting equipment in order to put the plant operation in full swing, while Chinese workers merely watch them, the employee said.

With more workers expected do likewise, Sony is reportedly stepping up its recruitment of new employees.

According to the press release on Nov. 7, Sony had been expecting "to record a gain in operating income from the transfer after its completion." While Sony may still be able to do so, now it not only has to repair damaged equipment, it may also face the risk that the walkout will affect negotiations with O-Film.

Even a simple misstep can seriously affect a company's operations in China, with seemingly minor trouble often developing into large-scale problems.

Since the start of the 2010s, a string of big-name Japanese companies -- including Honda Motor, now-defunct Sanyo Electric, Panasonic and Citizen Holdings -- have had big industrial disputes, and many of them ended up paying workers huge amounts in compensation for settlement. Such cases may become even more common now that China's economic growth is slowing and more foreign players are considering pulling the plug on some of their Chinese operations. Sony's recent trouble should serve as a warning to other companies.